Top 10 facts about the United Kingdom 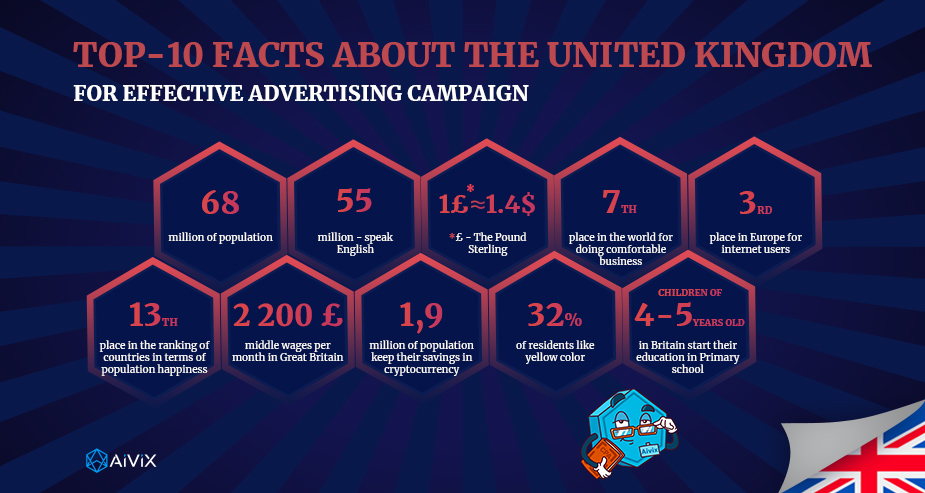 1. GEOGRAPHY AND POPULATION OF GREAT BRITAIN

Great Britain is a beautiful rich country with a distinctive culture and traditions, special humor, hooliganism of the football fans and boundless love for the Queen.
London is the capital of Great Britain, the largest and most important city in the country, also a leading financial center, and the most popular travel destination.
According to data for 2020 the population is 68 million people.

• Edinburgh is the capital of Scotland, one of the most popular cities in the country with wonderful architecture, streets that have inspired dozens of talented people to live and work.
• Bristol - the oldest port in England with beautiful Georgian architecture, seaside city atmosphere.
• Glasgow - before a wealthy industrial city, today it is famous for museums, art galleries, festivals.
• Liverpool - famous for music because it’s the birthplace of the Beatles, also famous for sports and Irish pubs. It is a center for transatlantic shipping; a trade city with a rich history.
• Manchester is the economic and cultural center of Lancashire, formerly the largest industrial center in Europe; today it has become an entertainment and sports center.
• Bath is a seaside town with an ancient heritage, amusement parks and fairs.

The UK currently uses 1 time zone - London UTC-0 (GMT). The area of Great Britain has about 240 thousand km and is located on the British Isles, the shores are washed by the Atlantic Ocean, and the English Channel separates it from France. 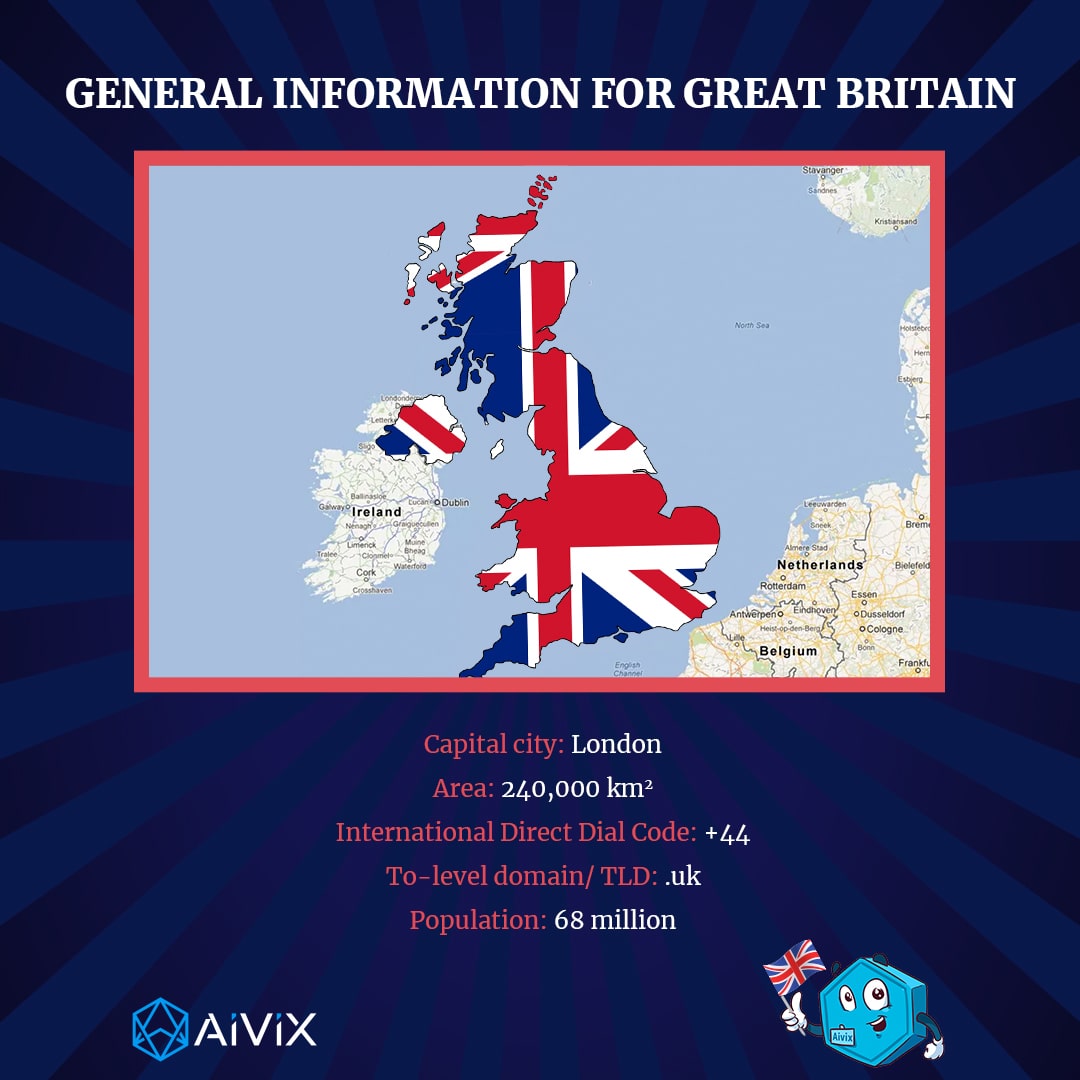 English dominates and has the status of a state language here. However, there are a lot of other languages alive and peacefully coexist with the state one.
English with all its dialects is spoken by about 55 million people across the UK.
Welsh (Welsh or Kimri) is used by 611 thousand people in everyday life. They are residents of Wales and part of England near the Welsh-English border.
The Scottish language, or Scots, is sometimes considered not a separate language, but a dialect or regional variation of English. It is common among the residents of the plains of Scotland and spoken by about 1.5 million people.
The Irish language is constantly spoken by 95 thousand people.

3. CURRENCY IN THE UK

The main currency in the country is the Pound Sterling - one of the five most expensive currencies in the world.
£ 1 * (GBP) ≈ 1.4 USD
1 GBR - Pound Sterling (at the exchange rate for December 2020)

4. INTERNET IN THE UK

London has been accepted as the capital's most popular for using online social networking. As it turned out, residents of this particular city used Facebook, Twitter and Digg services most actively.
3rd place in Europe by the number of active Internet users.
Online shoppers in the UK spend more on family needs than consumers in any other country. Internet throughput per one internet user was the seventh in the world in 2016, and average and peak of internet connection speeds were at the top in 2017.

Residents of London are among the most active users of the most popular service on the planet:

• In the UK, 89% of adults used the Internet at least once a week in 2018
• Mobile phones or smartphones are still the most popular devices to access the Internet in Britain - 78% of surveyed
• “Email” remains the most common Internet service for people in Britain - 84% of surveyed
• The proportion of British citizens aged 65 and over for online shopping has tripled since 2008, increasing from 16% to 48% in 2018.
• A quarter (26%) of adults using smartphones didn’t have security software for smartphones, another 24% didn’t know if it was installed.
• 70% of employed British believe they have sufficient computer skills to work.

5. ECONOMIC DEVELOPMENT IN THE UK

• Great Britain is a highly developed post-industrial state. The UK economy is the 10th largest economy in the world in terms of GDP PPP for 2018. The leading sector of the British economy is the service sector (3/4 of GDP).
• Unemployment in England during January-July 2019 decreased from 4% to 3.8%. The number of unemployed citizens is approximately 1.3 million, and 33 million people have a permanent job.
• Thus, given a standard work week (44 hours), the minimum monthly wages for a 30-year-old employed in England is £1,500.
• The labor market in England during the first half of 2019 was stable and, despite the difficulties, the country's economic growth sustainable. Considering this, experts have announced an optimistic forecast by 2020 - the minimum wages in England should reach 9 pounds per hour.

7. WORKING DAYS AND HOLIDAYS IN UK

When planning up an advertising campaign should be taken an information about working days and holidays in Britain. Such settings help to search the target audience and make the advertisement effective.
Working days of the British: 5 days a week for 8,5 hours a day from 08:00 to 16:30. The UK has no national holiday. Only one country has a similar situation - Denmark. There are only 8 non-working days throughout the year, excluding weekends. Officially non-working days are called Bank holidays in the UK. All banks and official institutions are closed on these days.

The stability in the character of the British comes from the stereotypical English mentality well known throughout the world since Victorian times. Although the country has undergone many changes and is still constantly changing, the main features are courtesy, self-control and the same conservatism. Great Britain has long been a "classic offshore" with low tax rates and excellent conditions for business: a developed banking system, the presence of large stock exchanges, and so on. The UK is good for a holding company formation, but it is still better to issue tokens in ICO process in more suitable jurisdictions, for example, the Cayman Islands or the British Virgin Islands. 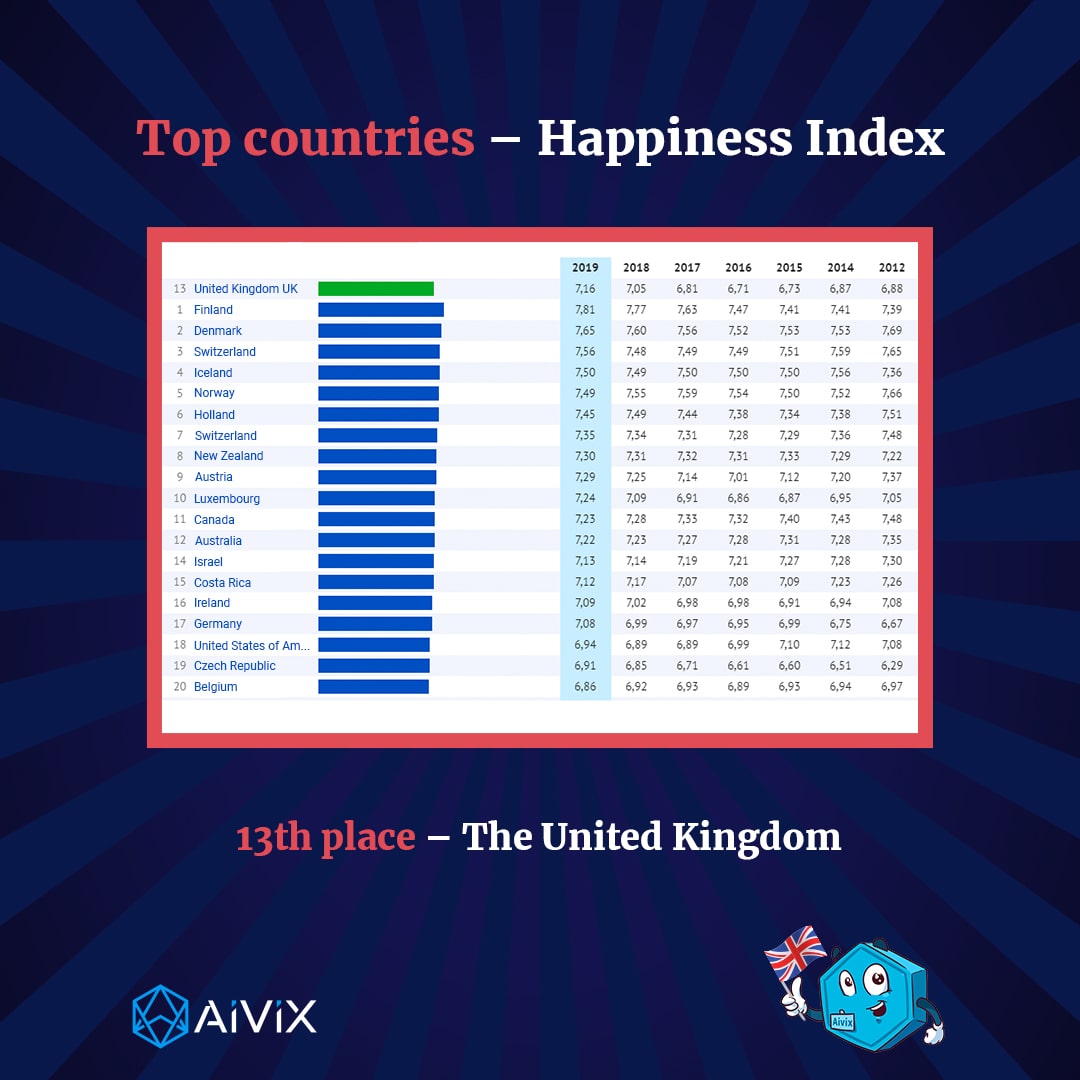 9. ADVERTISING IN THE UK

Advertising in each country has its own characteristics, for example, the British successfully combine verbal-oriented advertising with imaginative advertising. England is the complete opposite of America. "Hints" are a characteristic feature of British business culture. For the past 30 years, London has rightly been considered the Mecca of advertising, which is an example for creators around the world.

English humor is not clear to everyone - intellectual, subtle, even noble. Things are about the same with advertising as well - it is of high quality, elegant, intelligent. There is always an English spirit: traditions, history, gentlemen, a Queen, red double-decker buses and telephone booths. All this associates with only one place on Earth – The United Kingdom.

Psychologist David Lewis studied English perception of colors during winter days. It revealed that the yellow color has the most positive effect.
Yellow color was named “favorite” by 32% of people surveyed in London. And 46% said they would prefer yellow to any other color in winter.
The next most popular color in the UK is red, with 14% votes. Purple scored 7%, while 6% shared green or orange.
The British find red a symbol of vitality, youth, physical strength, joy and celebration. In the perception of the British, he expresses extremely positive emotions. 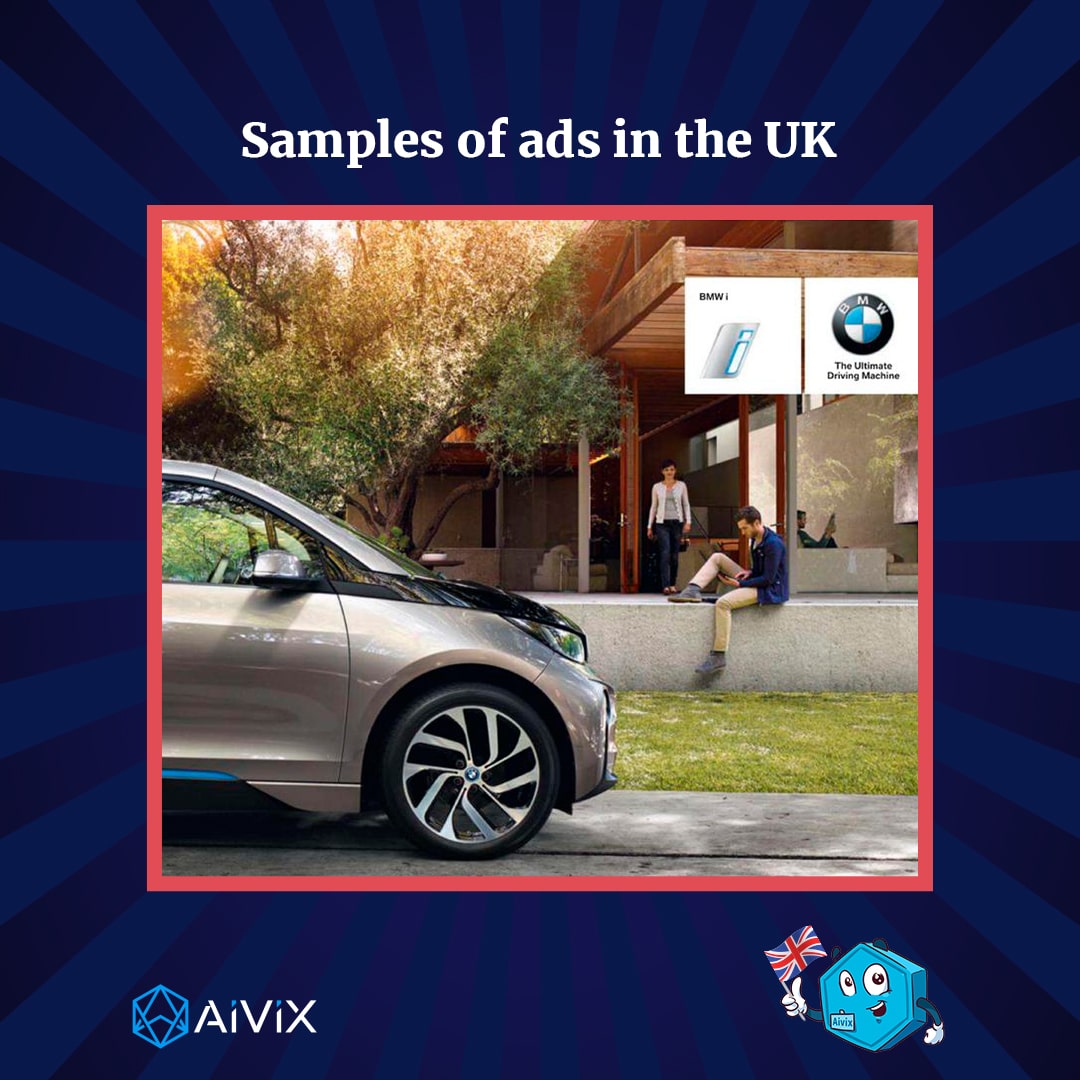 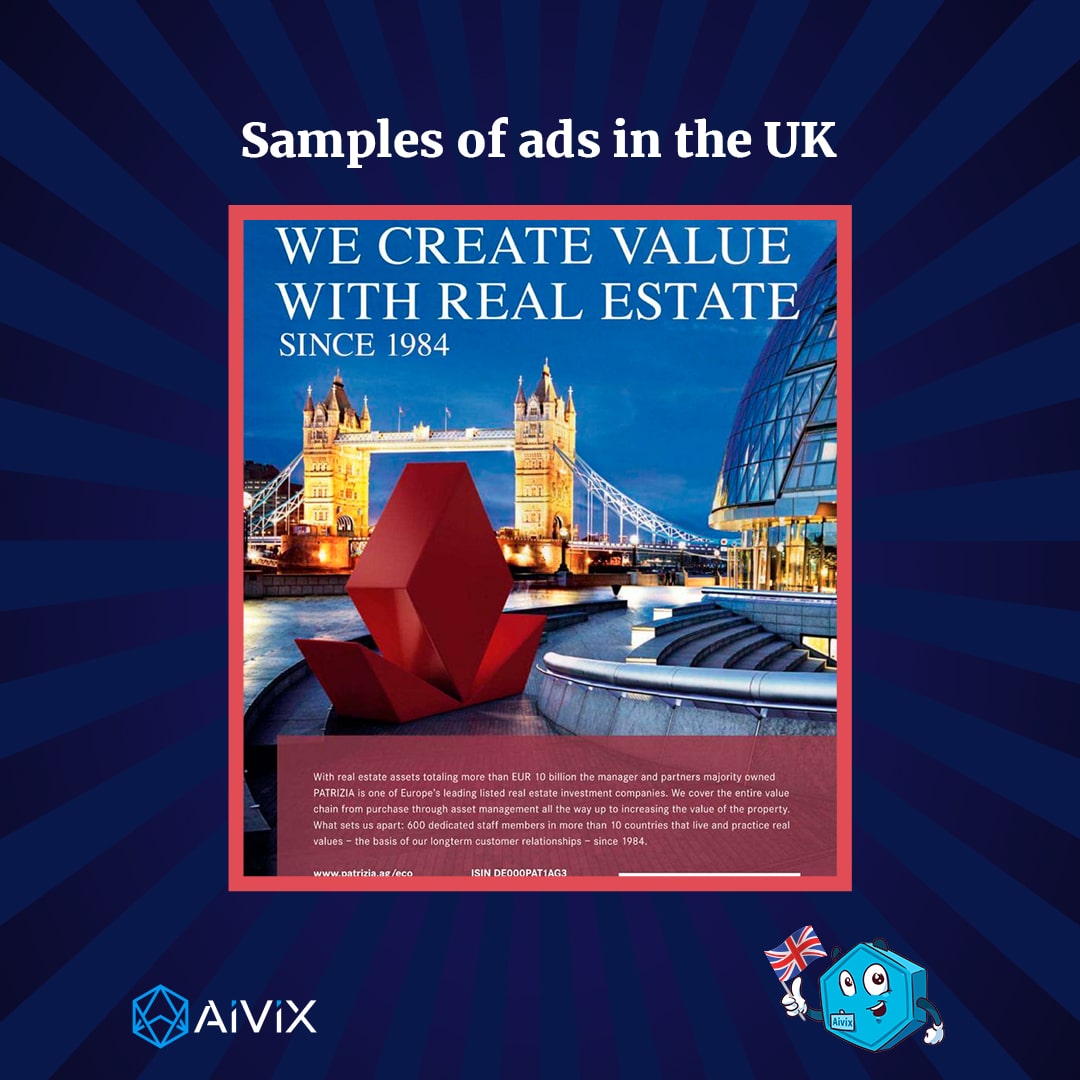 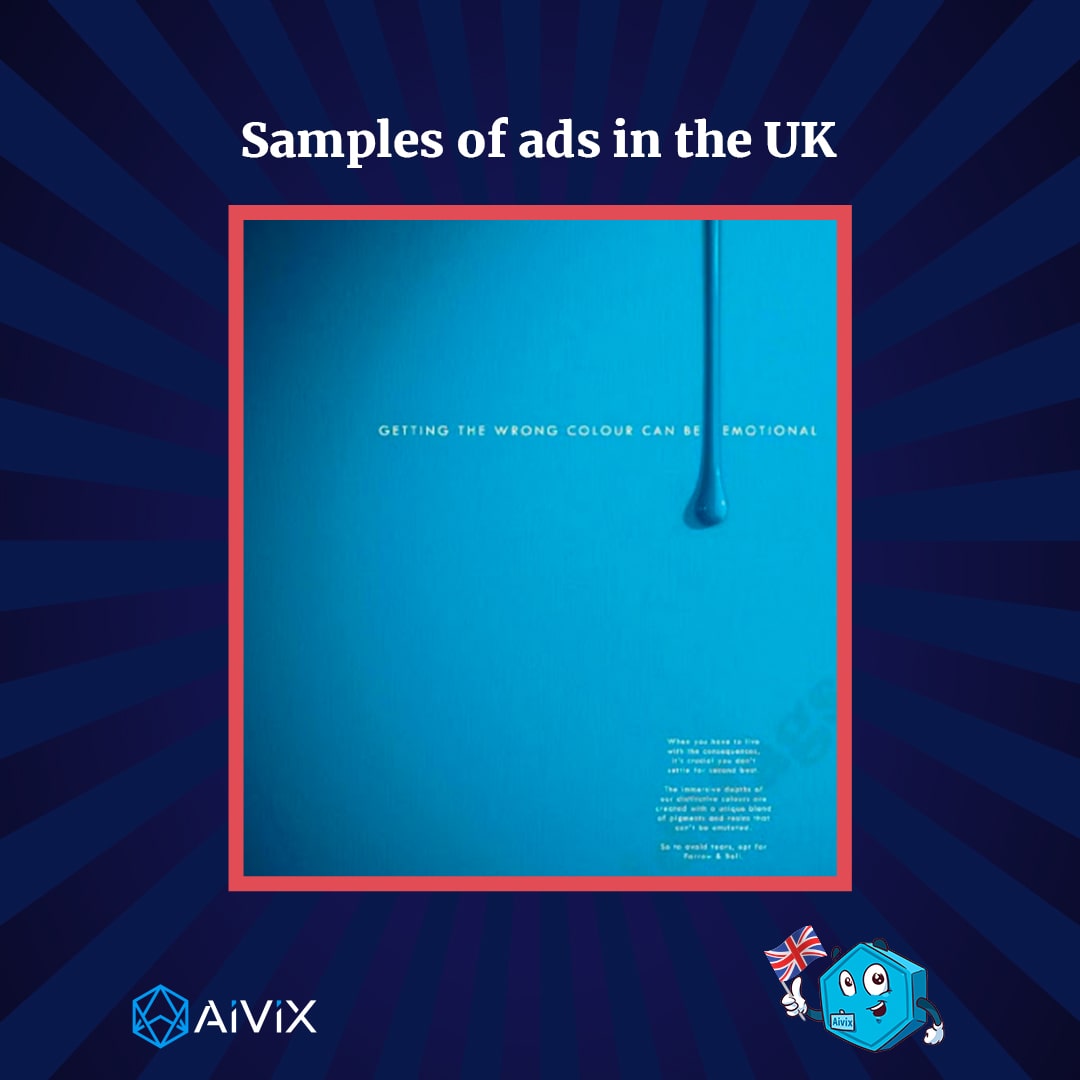 10. Interesting facts about the UK

Glad to be helpful, your Aivix