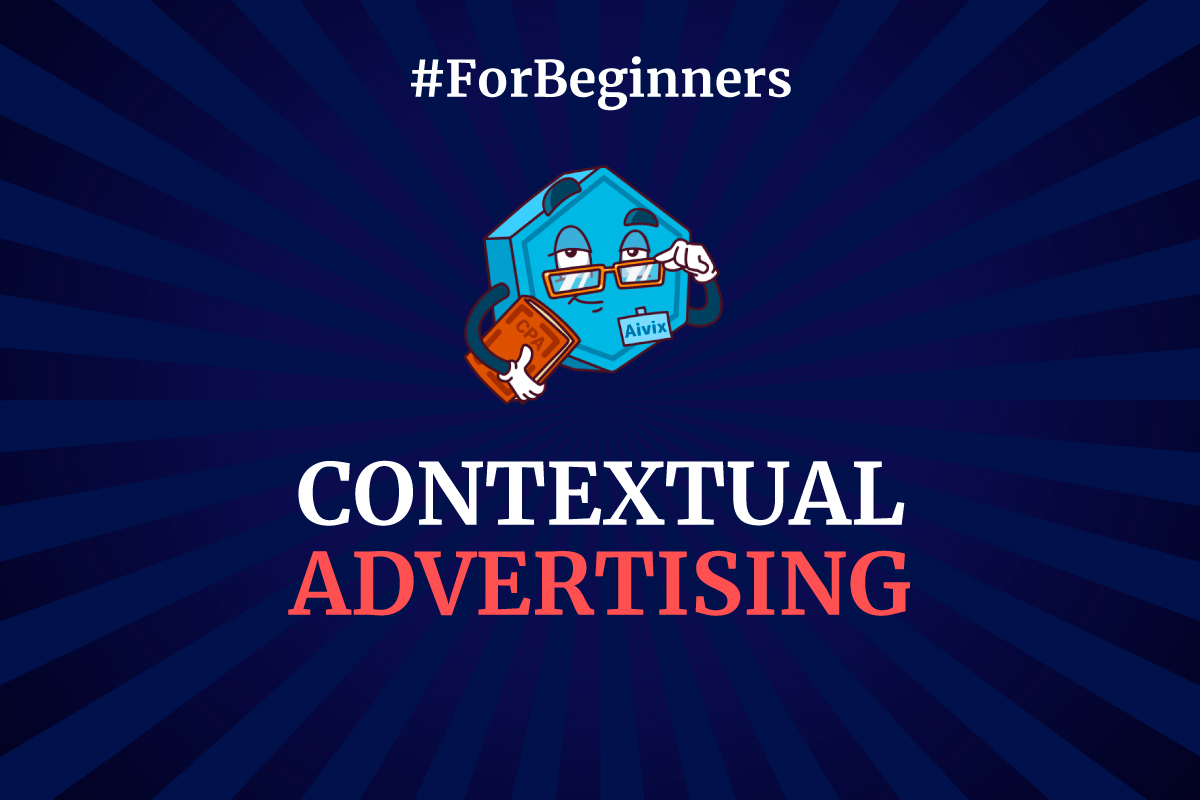 Contextual advertising is one of the most popular traffic sources in 2022, allowing you to work not only with a well-chosen target audience, but also with already warmed-up clients. All this allows you to get maximum profit with due effort, and today's topic of our discussion will be this particular source of traffic.

Next, we will tell you what contextual advertising is in general, what types of it exist, what are the advantages and disadvantages of the context, and how to properly launch an advertising campaign in this direction. Let's not delay and let's get started!

What are the context ads?

The term “context ads” means the distribution of advertisements through browsers known to all and partners of these companies. In other words, when a user enters some kind of search query and sees links with an “advertisement” box at the very top and bottom of the page, this is the result of launching a campaign in context.

At the same time, one of the main features of this traffic source is the use of a whole database of keywords, which are commonly called the semantic core. With their help, the client will be able to find the product he needs in the form of your offer (advertised product), and you will be able to make a profit from the next client. On the other hand, this is far from the only advantage of contextual advertising.

We also highlight other advantages of working with it:

1. Flexible targeting settings. Although the bulk of the traffic comes from well-formed keywords, each ad network includes a lot of modifications regarding the target: GEO up to regions, gender, age, place of work, income level, user interests, and many other equally useful additions.

2. Ability to work with large coverage. In fact, you will have at your disposal the entire Internet with dozens of GEOs to work with, just prepare a campaign, replenish your budget and fill in at least thousands of dollars every day.

At the same time, the traffic source also has several drawbacks or even more conditions that the affiliate marketer and his advertising campaign must meet. Firstly, you will have to prepare a very solid budget, because the cost of launching in contextual advertising is far from the cheapest due to high competition. If you wish, you can also find cheaper GEOs for work, but then how lucky.

How to work with context ads?

Before analyzing the specific nuances of launching an advertising campaign in context, let's talk about the main feature of the source - key queries. To properly collect the semantic core, you don’t need to be an SEO guru and it’s enough to simply know which keywords will suit your target audience, what frequency they have, and what types they are divided into. We collect the semantic core correctly.

So, let's start with 3 types of keywords:

1. High frequency keys. The most popular keywords that users enter into the search bar most often - depending on the vertical chosen by the webmaster, such options receive from 10 thousand to one million requests every month.

2. Mid-frequency keys. They are even more popular with webmasters, because although they bring 10 or even 100 times fewer requests, they give full-fledged targeted transitions, after which a potential client is very likely to perform a targeted action.

3. Low-frequency keys. Requests of this kind are entered by users very rarely, mostly only a few times a month, but according to official statistics, they bring 40-50% of traffic. Also, the advantage of these keys is their low cost and great variety. That is, with their help, you can both save time on searching and money from the advertising budget.

For the very collection of key queries, you can use the services built into advertising networks. So, for example, when working with Yandex, you can use Yandex.Wordstat, which will tell the webmaster in detail about each key and offer a couple of similar options.

The next step in preparing for an advertising campaign will be to view other ads similar to your offer. It often happens that one large company cooperates with a large number of affiliates at once, and with the help of SPY services you can easily see how other webmasters are promoting your own advertising offer.

Learn what ads they use, what target audience they work with, and how they try to hook a potential client. We also recommend that you study not only successful examples of generating targeted actions, but also unsuccessful situations in order to see what you definitely shouldn’t do in promotion.

First, you need to outline the target audience in general terms and understand who exactly our offer may be interested in. You need to pay attention to the GEO of users, their level of earnings, age and gender.

Then you can move on to an even more important stage in the analysis of the target audience, namely its segmentation. For example, in the USA there are a large number of states and it would be much more logical to divide the target audience depending on the state than to launch an advertising campaign for the entire state at once.

It is also common practice to divide segments based on people's interests. That is, if when distributing an offer for one part of potential customers it would be much better to use aggressive marketing techniques, direct sales, and similar structures, then for the other part, slow warming up, informative articles and posts on social networks, a detailed description of the product and all are much more relevant. in that spirit.

Of course, for each prepared segment in the future, you will have to work out your own creatives, landing pages and other materials to launch an advertising campaign, but be sure that the approach is proven and will pay off the time and financial costs.

This approach allows you to identify the most effective promotion tools, combine them in one campaign and use them for a full-fledged bay for a full budget, and a small piece of it.

If you wish, you can skip this part of the promotion, which is especially important in the absence of large budgets, but in this case, be prepared for serious profit losses if you fail to get into the audience the first time and your ads seem to them not convincing enough.

Since different traffic sources can be used for contextual advertising, we will analyze one of them as an example and discuss launching an advertising campaign through Yandex.Direct.

To begin with, we need to select the type of ad, but if you are launching a promotion for the first time, we recommend that you try the universal ad option, namely the text-graphic format. 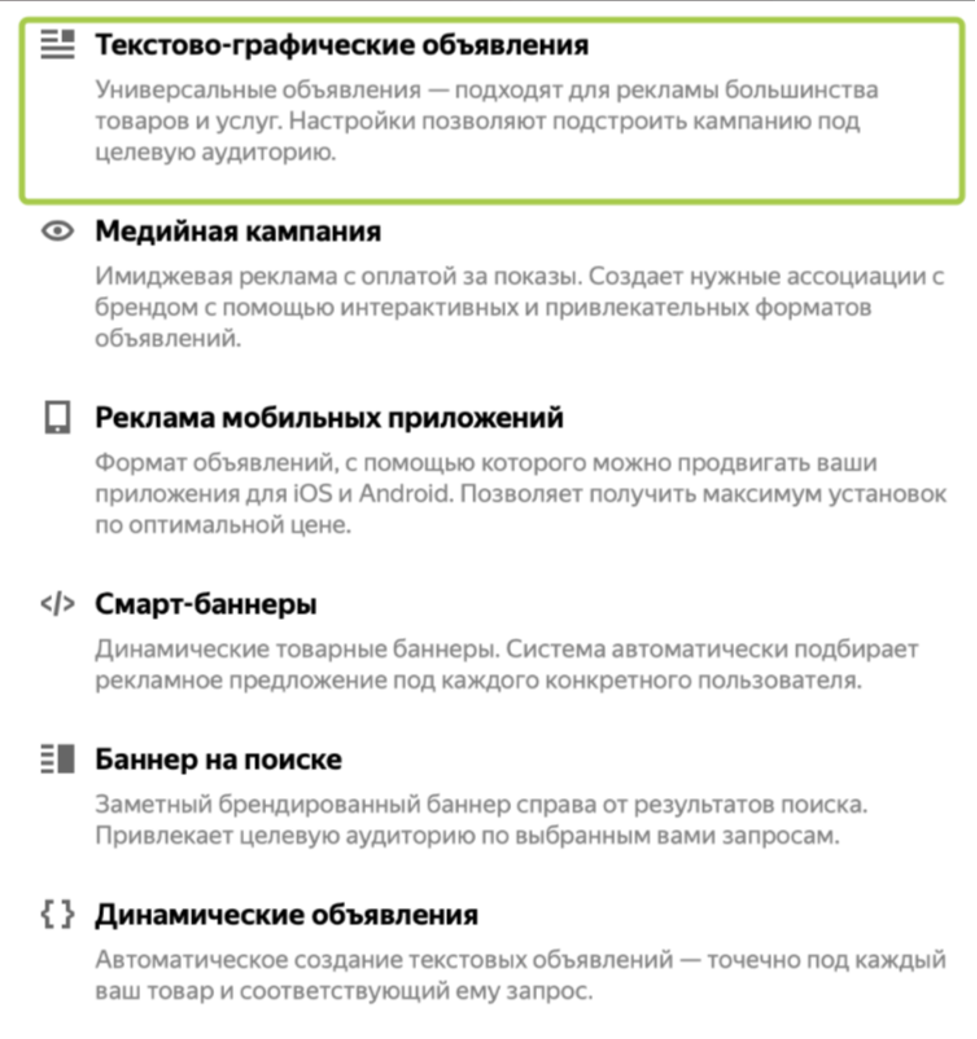 Next, give the ad campaign a name:

The next step is to work out the time for publishing ads. Basically, webmasters divide the promotion of the offer into day and night periods, but a lot depends on the activity of your target audience and the conditions on the part of the advertiser. For example, a company selling an offer can work from 10:00 to 20:00, the rest of the time it will not physically be able to accept a client's order.

Also, test campaigns will help in determining the most effective PR time, because even on a small volume you can see on which days the promotion results are best.

The next step is to determine the GEO to work with. As mentioned earlier, you should not limit yourself to the choice of the state alone - distribute the audience by region. 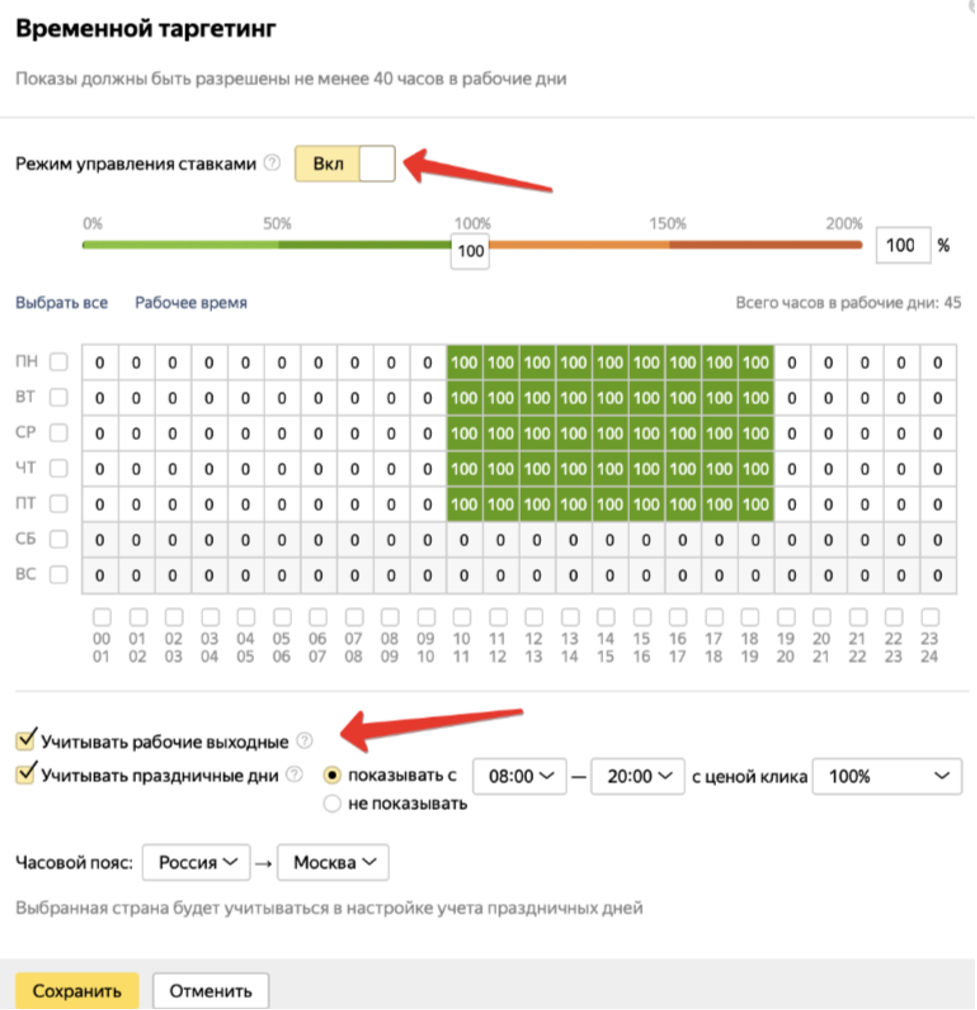 If desired, you can even turn on "Advanced Geographic Targeting", aimed at the use of search queries by customers that will indicate the name of the display region.

Next, you need to choose a display strategy, where we determine the necessary target action, the average cost per click and conversion, as well as the weekly budget for the advertising campaign. Then all that remains is to add previously tested ads and launch the promotion.

First, we recommend that you keep track of its statistical indicators while the advertising campaign is running. Not all ads can bring a proper response from the target audience, it may be necessary to replace some prepared materials with others, change the time of displaying ads and change a number of other parameters for the Republic of Kazakhstan. All this must be done promptly, as even a slight delay will affect profits.

Secondly, after the end of the campaign, we recommend that you see what indicators you managed to achieve, what was missing in the promotion, and what, on the contrary, was superfluous. This is a great future start that will help make subsequent launches easier and more efficient.

In today's material, we talked in detail about contextual advertising in traffic arbitrage, about the advantages and disadvantages of this launch direction, about the principles of working with it, and many other equally important nuances.

We tried to tell you about this topic as simply and accessible as possible and we hope that now you know how to launch an advertising campaign in the right context and put your knowledge into practice very soon. We wish you good luck and see you soon next time! 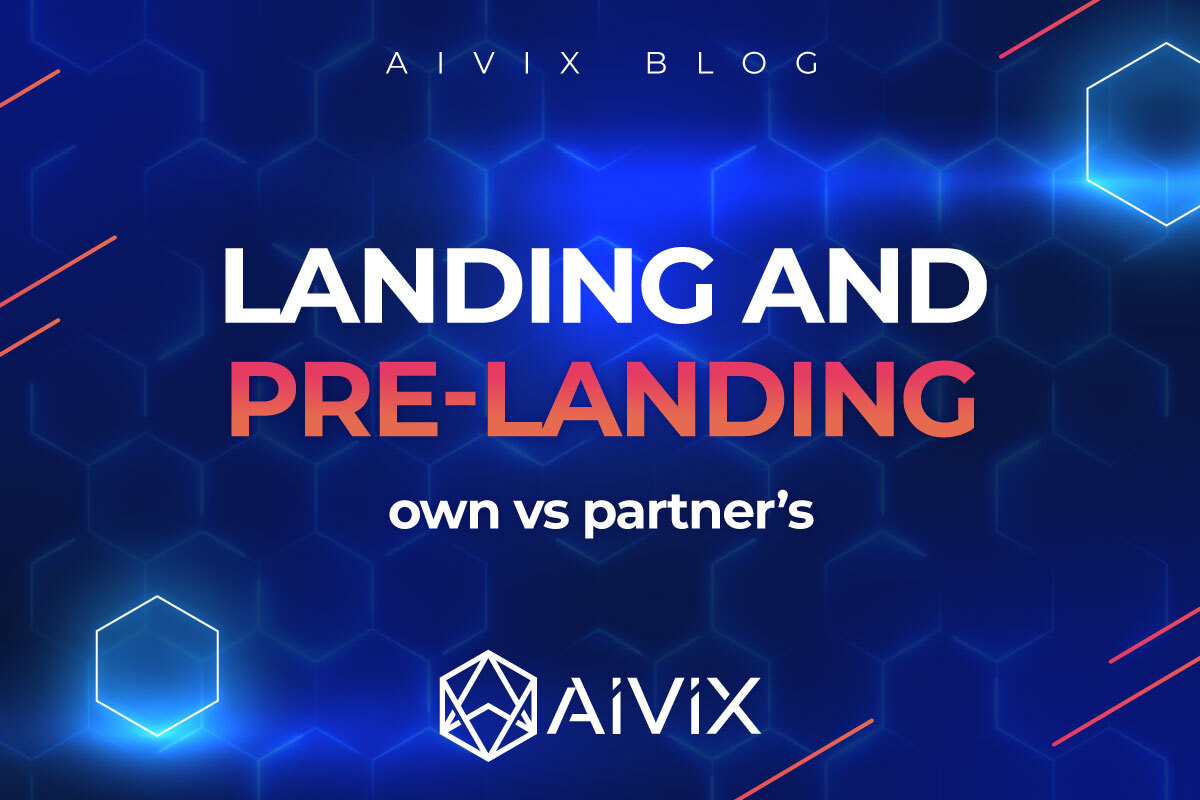 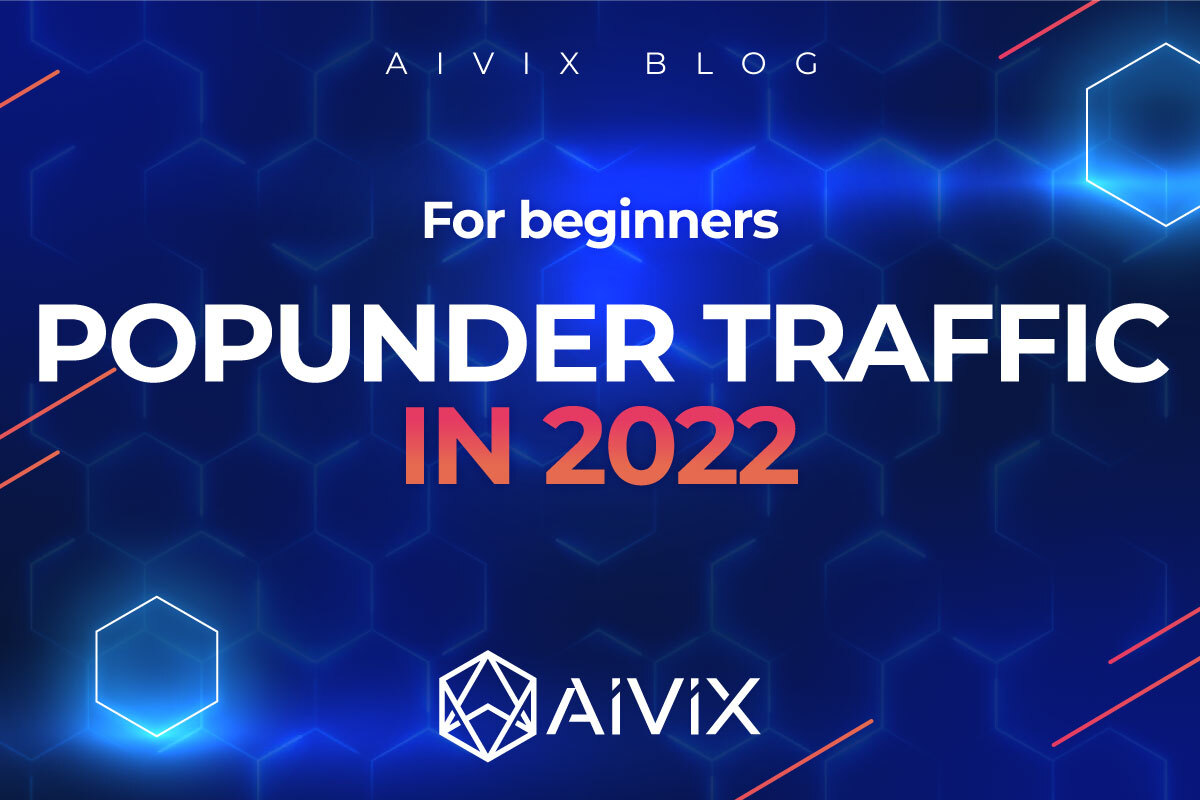 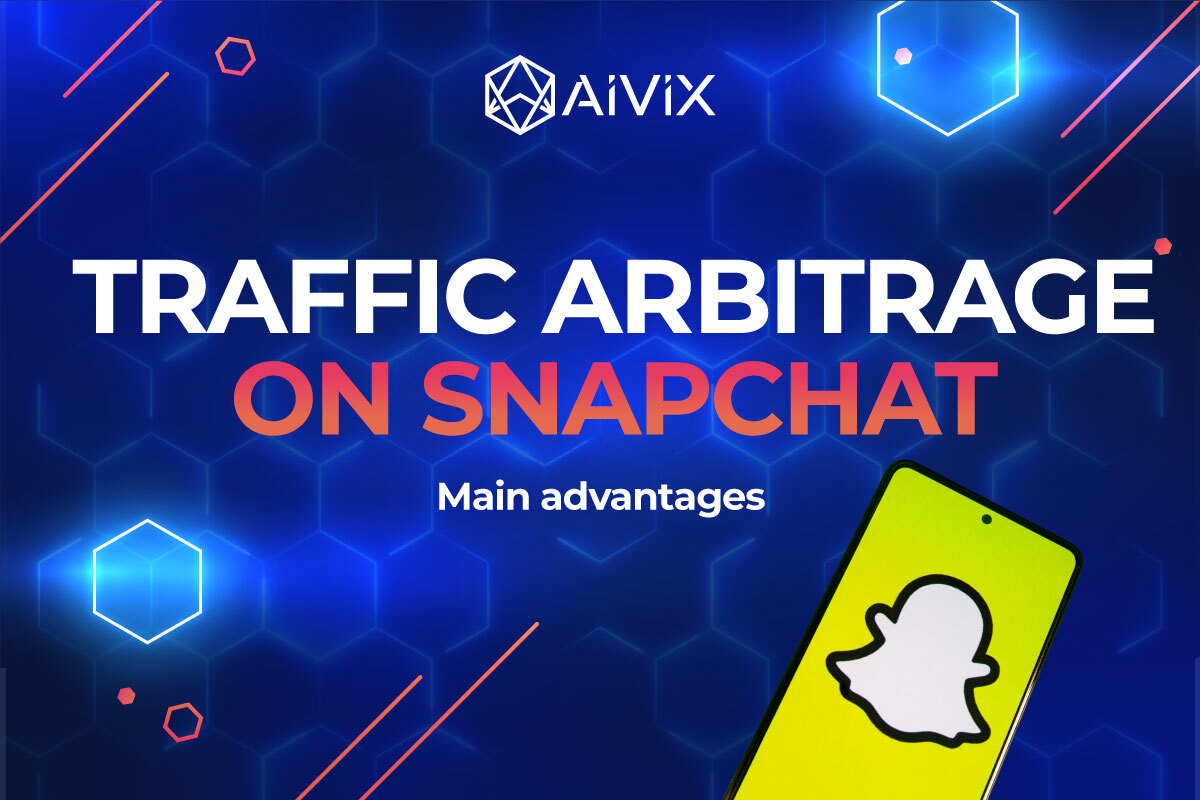