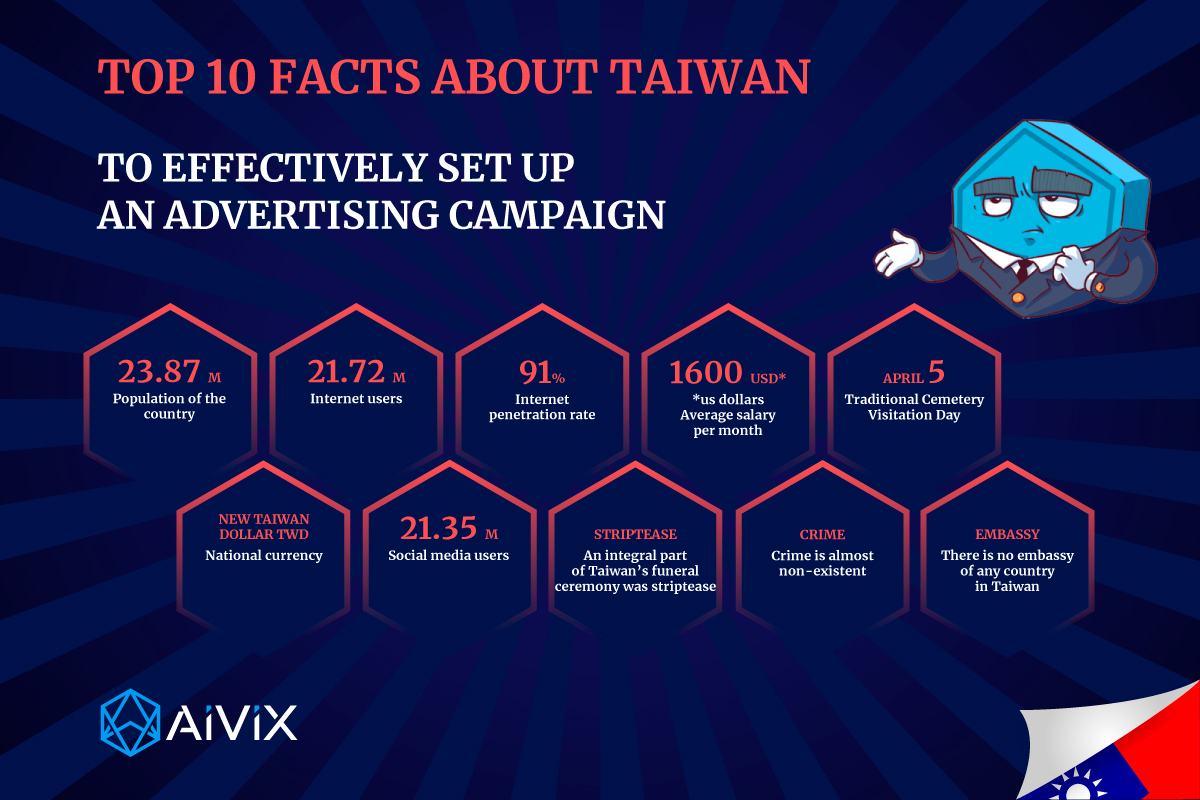 Taiwan also called the Republic of China (not to be confused with the People's Republic of China), is a partially recognized island nation in the Pacific Ocean. Today it has a controversial geopolitical status and is undergoing territorial claims by China.

For tourists from the CIS countries, Taiwan is an unknown country. Little is known about it and is not considered a direction of exciting travel, and even more so moving. In this article, we will tell a little more about the island and perhaps push someone to a deeper study.

1. Geography and population of Taiwan

The island state is located near China and is separated from it by the Taiwan Strait. A distinctive feature is a rich flora and fauna, divided into several natural zones.

It rains very often in this country, in some regions the level of precipitation can reach 2000 mm.

Mountain ranges and tropical rainforests intersect with multimillion-dollar metropolitan areas. The population of Taiwan, by the way, is a total of 23 million: only a small percentage of them are indigenous, and the rest are ethnic Chinese.

Taiwan's main geographical problem is natural disasters. The island is located in a seismically active zone, therefore it often suffers from earthquakes, sometimes strong ones. And where there is an ocean and earthquakes, such as tsunamis and tremors.

The official state language of Taiwan is Chinese. But the local population often speaks local dialects, such as Taiwanese, which has some similarities with Chinese, but at the same time is very different from it. Some residents of the Republic of China speak Japanese and many (unlike the Chinese of the PRC) speak English. If you know the latter, there should be no problems with communication: announcements and signs are also almost always duplicated in English, so you can get your bearings even if there is not a single English-speaking Taiwanese around.

The official currency in Taiwan is the New Taiwan Dollar. 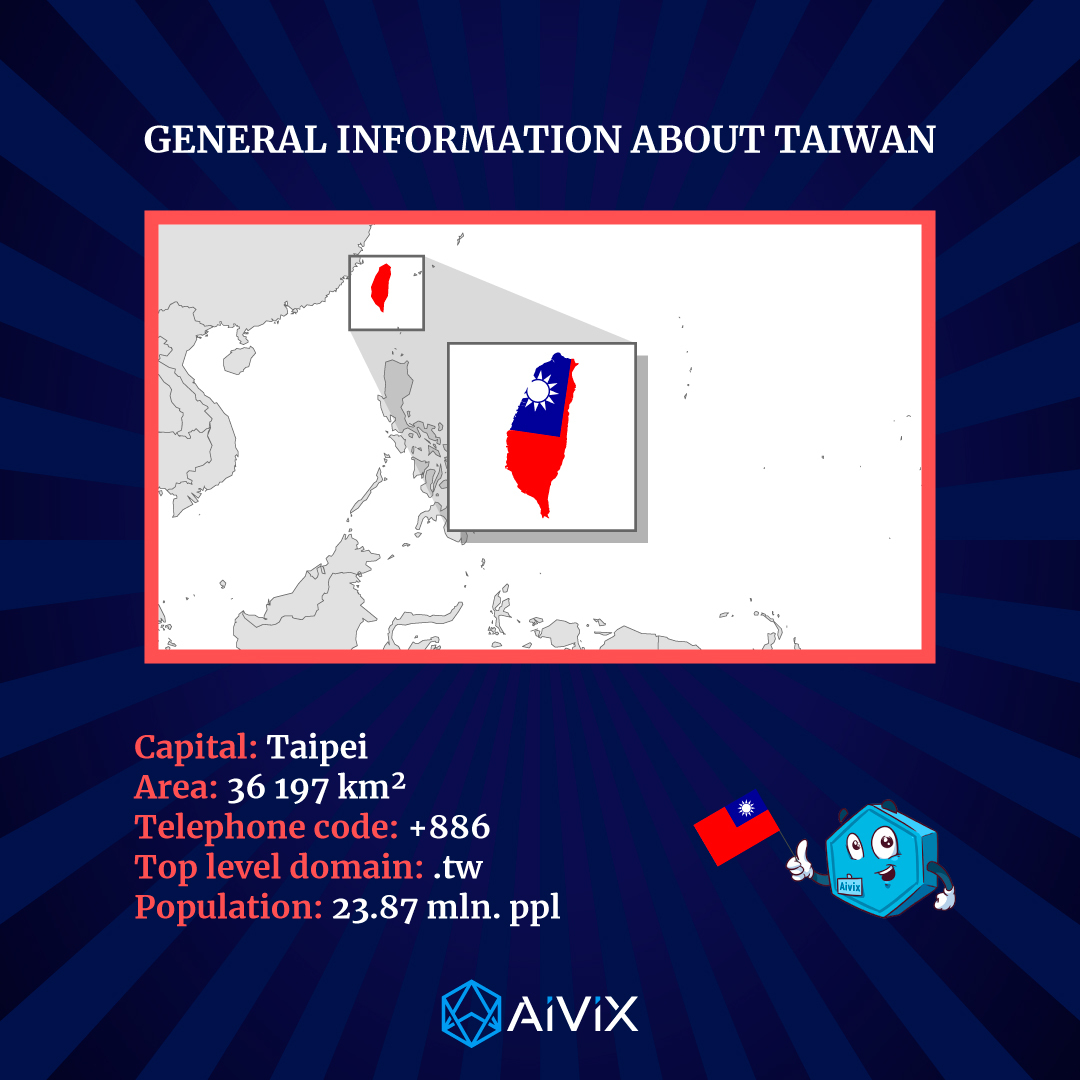 There are no internet problems in Taiwan. High-quality and fast connection, available WiFi. There are a lot of providers for home networking: SeedNet, SoNet, HiNet.

Fiber optic Internet costs an average of $8 to $20 a month - it's not very expensive. Corporate clients can use satellite Internet, but this is completely different money - at least $ 100 per month.

Mobile Internet is also relatively budget. Well-known service providers are T-Star, Taiwan Mobile, and VIBO Telecom. On average, their packages cost from $4 to $25 per month, but there are also more expensive plans.

Taiwan belongs to the category of developed countries. The standard of living of the local population is quite high, and the annual GDP growth has averaged 4% over the past 30 years. Periodically, crises and recessions occur here, but the government usually manages to overcome them effectively.

The agricultural sector is by far one of the smallest, in particular, due to the lack of suitable areas for this. In industry, there is a greater bias towards electronics and information technology.

The chemical industry is quite developed - especially the production of plastics and plastic products. There is a large demand for Taiwanese textiles, so the country is engaged in exports.

The largest share in the economic sector falls in the service sector. Tourism brings income to the treasury. 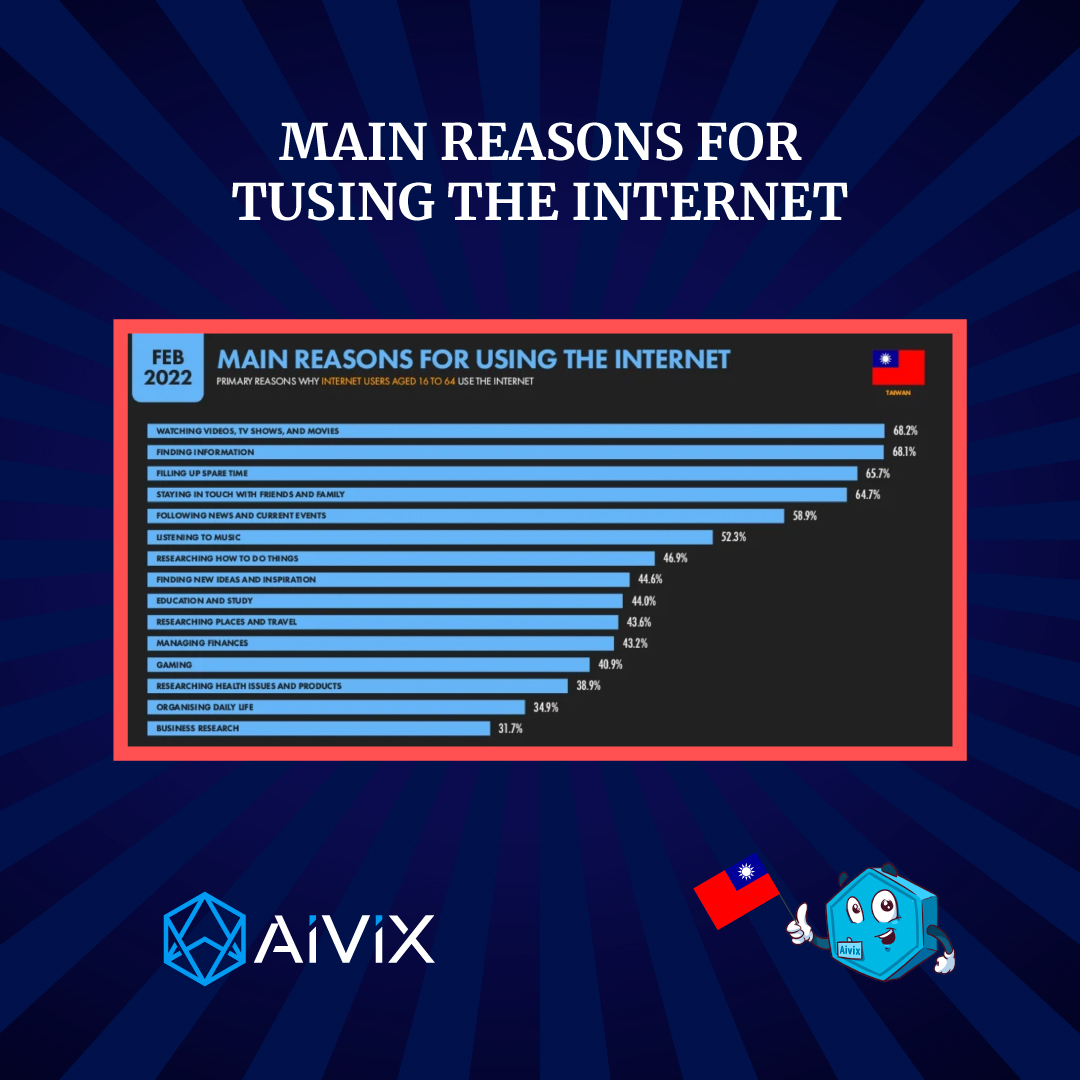 Wages in Taiwan are quite high. The minimum salary is more than $850, and the average salary is about $1600. At the same time, the unemployment rate is very low - just over 3%.

The salaries of representatives of the main professions are as follows:

In the field of skilled labor, the rate strongly depends on the length of service and education. It will be difficult to get, for example, seasonal work here, including due to the fact that this sector is not large enough in 2022.

Labor migration should be considered if you have an invitation from a Taiwanese company or confidence in your education certificate.

With a good standard of living and high salaries in Taiwan, prices are quite reasonable. You can rent real estate in the capital even for $500 per month, excluding utilities, but, of course, not in the center.

But the real estate market for sale prices is not happy. Own housing in Taiwan is very expensive, especially in large cities: a square meter costs tens of thousands of dollars. Therefore, even among the locals, many prefer long-term rentals.

At home, many Taiwanese almost do not cook - they prefer to eat in restaurants and cafes. In an inexpensive establishment, one person can dine for $3-$4, a good hearty meal in a middle-class establishment will cost an average of $10.

If you want to build your own grocery basket:

A trip by city bus will cost about $0.6. Two people with an income of $2,000 a month can live quite comfortably in this country, not particularly limiting themselves. 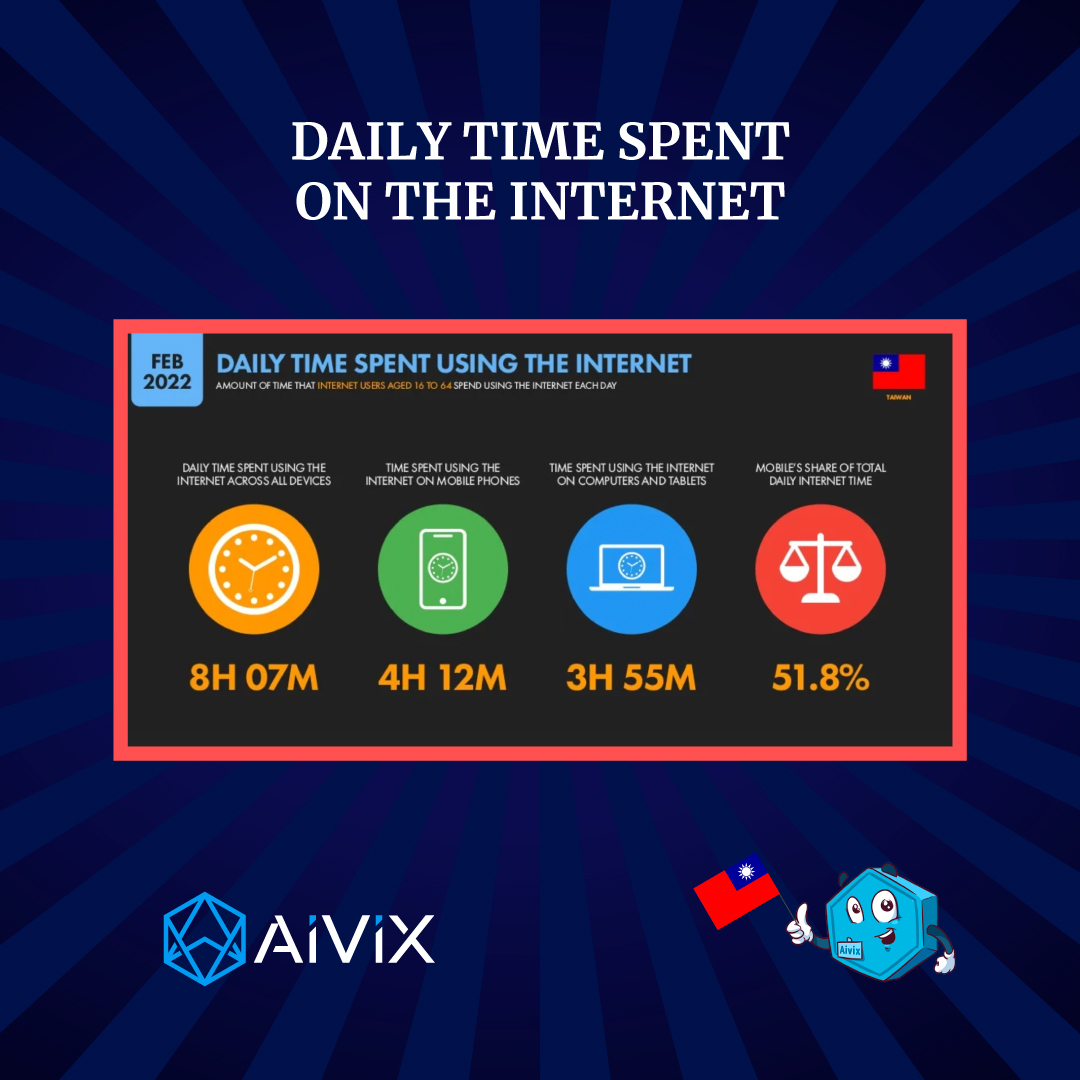 Taiwan has a fairly high-quality and progressive medicine. The healthcare sector switched to electronic format back in 2012, and all services are provided under an insurance policy.

The insurance has a large coverage of medical services, while the amount of the insurance premium has been and remains low: every working Taiwanese has a few percent deducted from their wages every month, and the state takes on most of the costs. Tellingly, in hospitals, there are no kilometer-long queues typical for Europe for months ahead, and it’s still easier to get to the doctor here.

You can also use the services of private clinics - there are such in Taiwan. The insurance policy also covers such services, so you can choose an institution at your discretion. Sometimes for some procedures, you need to make a symbolic contribution.

The quality of health care in Taiwan is highly regarded even by the WHO; it is also known that thanks to its improvement and the successful medical reforms carried out in the last 20 years, the average life expectancy on the island has increased significantly.

Education in Taiwan plays a key role in employment, so much attention is paid to it. It is paid even in schools (12 years of study), and even more so for universities. Sufficiently high-quality, but there are very few programs aimed at foreign students, and most often for studying and, in principle, admission, it is necessary to know the Chinese language and speak it fluently. 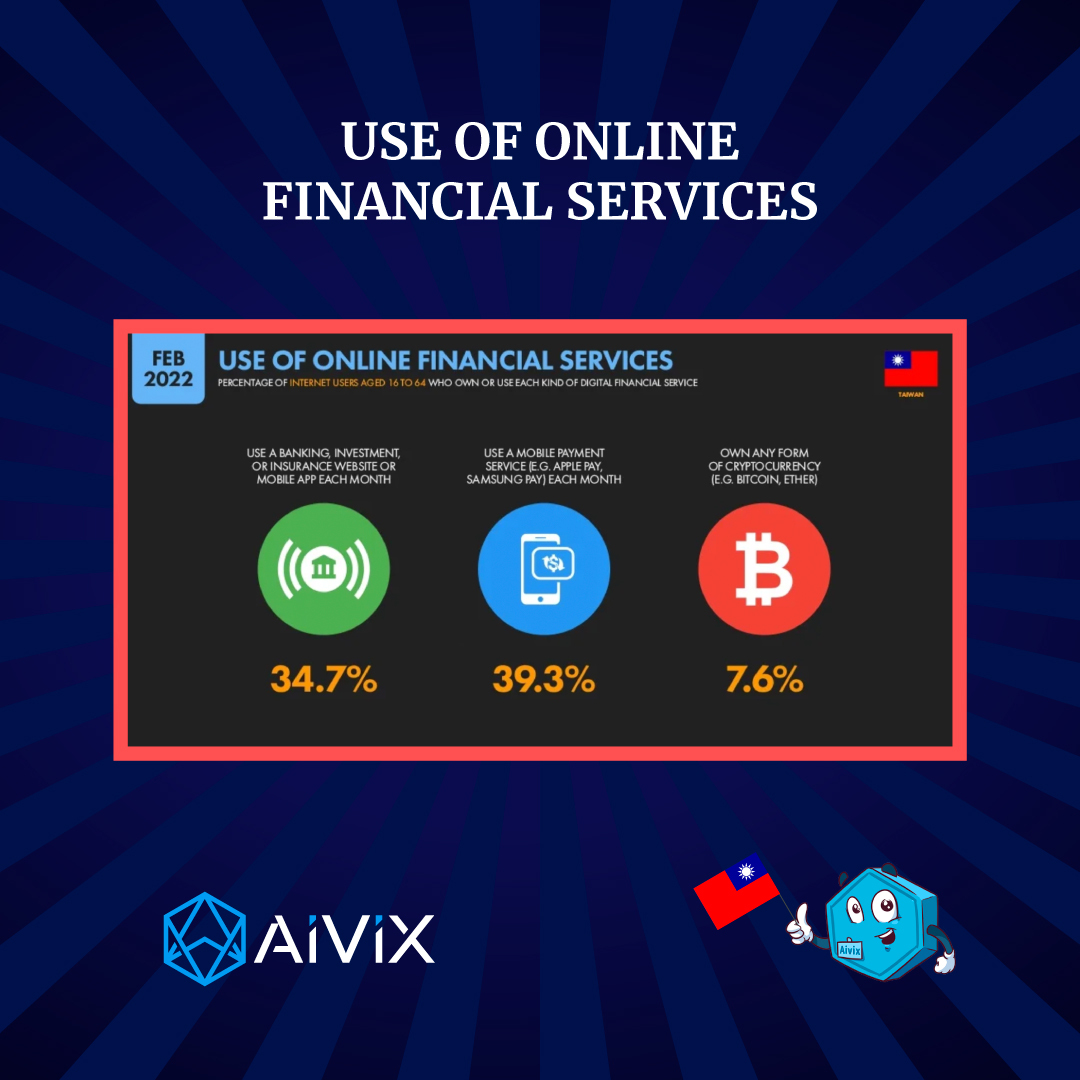 8. Non-working days and holidays in Taiwan

There are a lot of interesting traditional holidays in Taiwan that are unfamiliar to Europeans:

April, 5 - The Day of the Traditional visit to cemeteries

You may notice that many of our usual holidays are not celebrated here. In addition, there are many memorable dates in Taiwan: Halloween, Father's Day and Mother's Day, Teacher's Day, and Ghost Day. They are not considered non-working but are respected among the population that honors traditions.

9. The mentality of the population

The local population in Taiwan has some unique traits. They are quite restrained, including in the manifestation of emotions, disciplined and punctual. The majority respects the national idea and really dislikes comparisons with their mainland neighbors, identifying themselves as a separate nationality.

However, there are some noticeable differences in behavior: for example, in China, for example, tourists are treated with undisguised interest: they do not hesitate to look at them, they can point a finger - this does not go beyond the scope of Chinese etiquette. The Taiwanese don't do that. They also behave much more calmly in public places.

The difference in mentality with Europeans is quite noticeable, for example, in romantic relationships. Obviously, romantic courtship and, moreover, manifestations of passion, as in Italy or Spain, are not very common here - instead, Taiwanese men prefer rational actions that prove their willingness to help, support, and appreciate the lady of the heart.

Foreigners in Taiwan are treated friendly, but some courtesies can be formal and say nothing about real intentions: for example, an offer to meet and spend time together, after which you will never see the other person again. 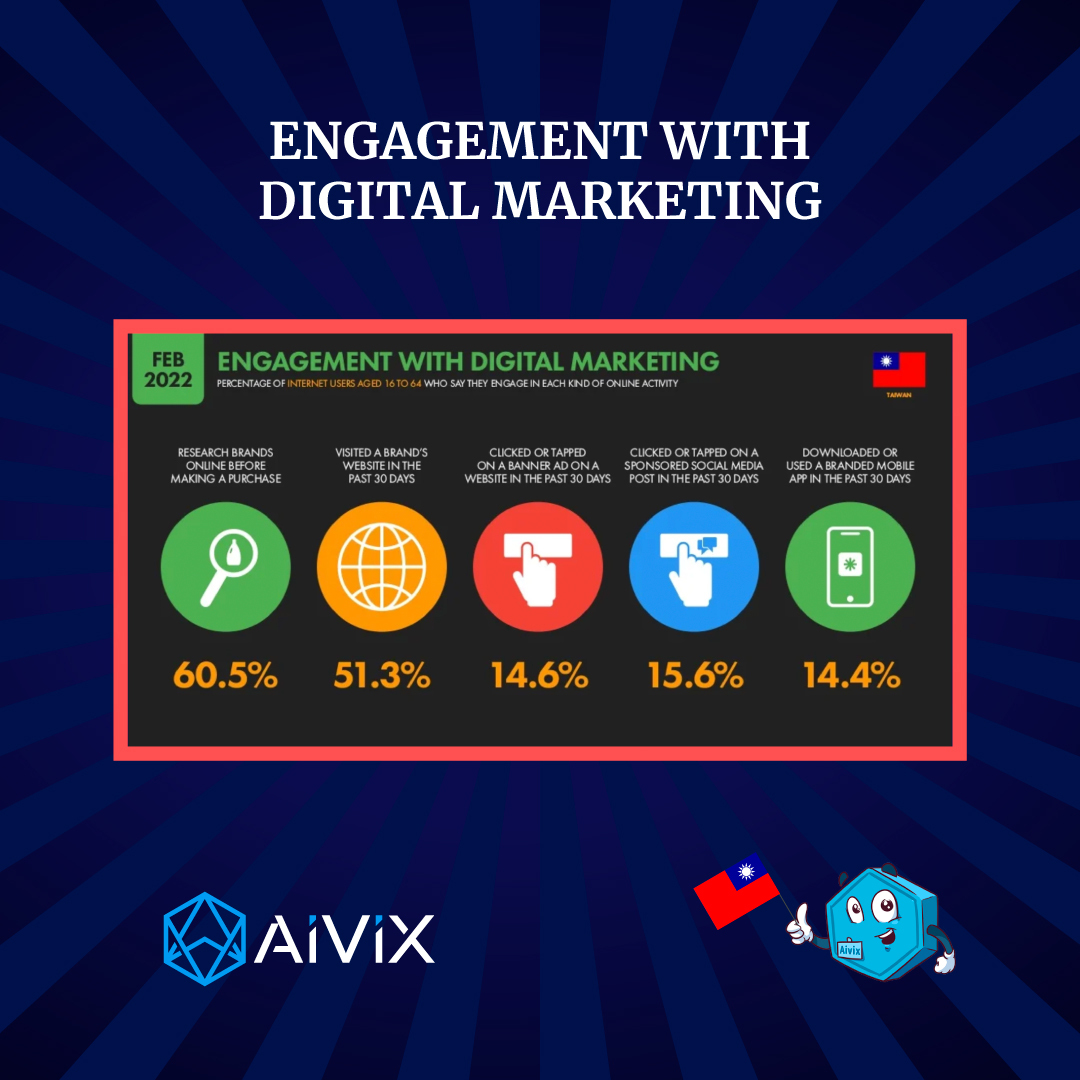 Cryptocurrencies in Taiwan have an ambiguous status in terms of legislation. They are still not recognized as an official means of payment (however, as in most countries of the world). Banks have been completely banned from using digital assets and generally interacting in any way - since 2013.

There are some restrictions for conducting an ICO - in order to attract investments legally, you need to comply with the rules on the issuance of securities or, depending on the size of the project, conduct preliminary testing, according to the results of which permission to launch a campaign will be issued or not.

At the same time, individuals can use cryptocurrencies calmly, including buying them on the exchange, and selling and exchanging them. You just need to follow the rules of taxation: if the turnover of a trader or investor is more than 40,000 Taiwan dollars per month, he is required by law to pay 5% VAT.

The Chinese policy of a complete ban, crypto-isolation, and the subsequent launch of a national cryptocurrency in Taiwan is not supported - at least to date.

Taiwan has an ancient and interesting history: the state has long been attacked by conquerors until it turned out to be the location of the Chinese invasion in the 17th century. Taiwan was part of China until the end of the 19th century, then for some time came under the control of Japan, and after its surrender in 1945, a long period of internal confrontations began between the Taiwanese patriotic population and mainland China. It has not ended even today: China and Taiwan have completely different views on the position of the island. Moreover, most of the world's countries are also having difficulty formally defining Taiwan's political status.

However, all these problems do not prevent Taiwan from remaining the center of a unique culture, traditions, and natural monuments.