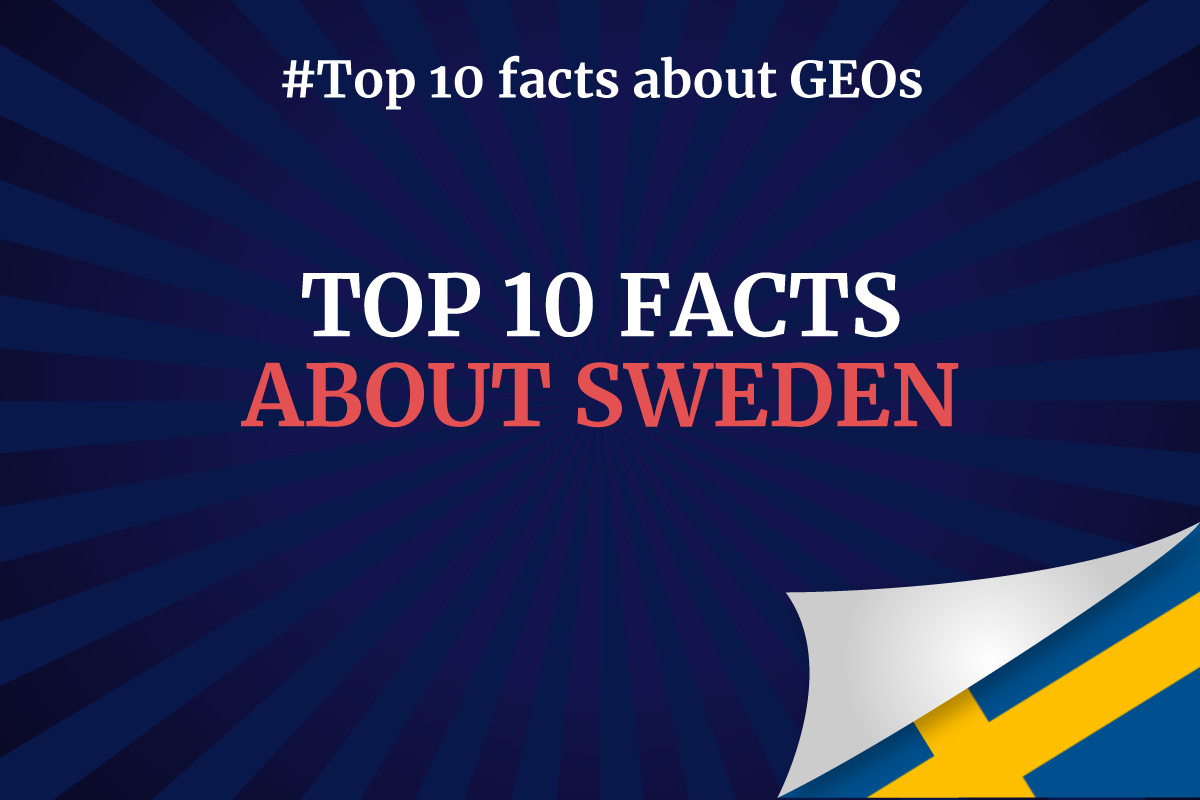 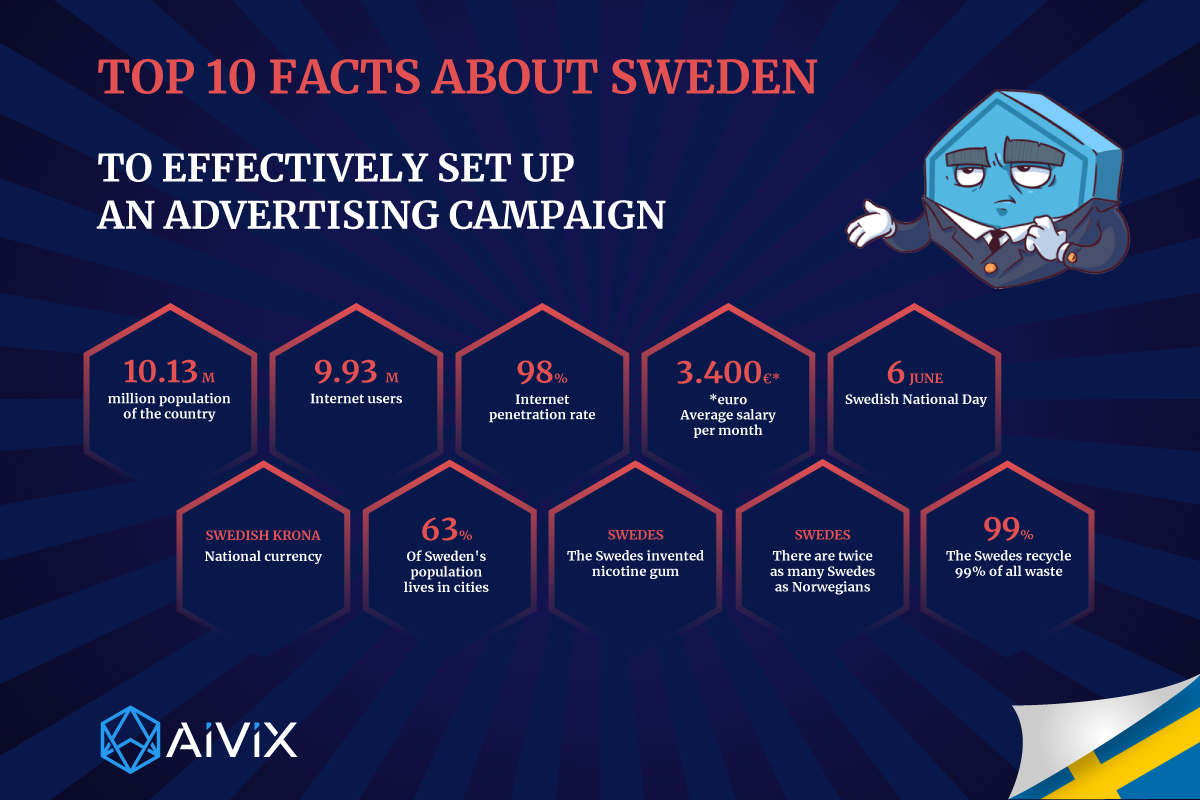 1. Geography and population of Sweden

7. Working days and holidays in Sweden

1. Geography and population of Sweden

Sweden, a country located on the Scandinavian Peninsula in northern Europe. The name Sweden comes from the words Svear, or Suiones, a people mentioned as early as 98 AD. by the Roman author Tacitus. The ancient name of the country was Svithiod. Stockholm has been the permanent capital since 1523.

Sweden occupies most of the Scandinavian Peninsula, which it shares with Norway. The land slopes gently down the high mountains along the Norwegian border east to the Baltic Sea. Geologically, it is one of the oldest and most stable parts of the earth's crust. 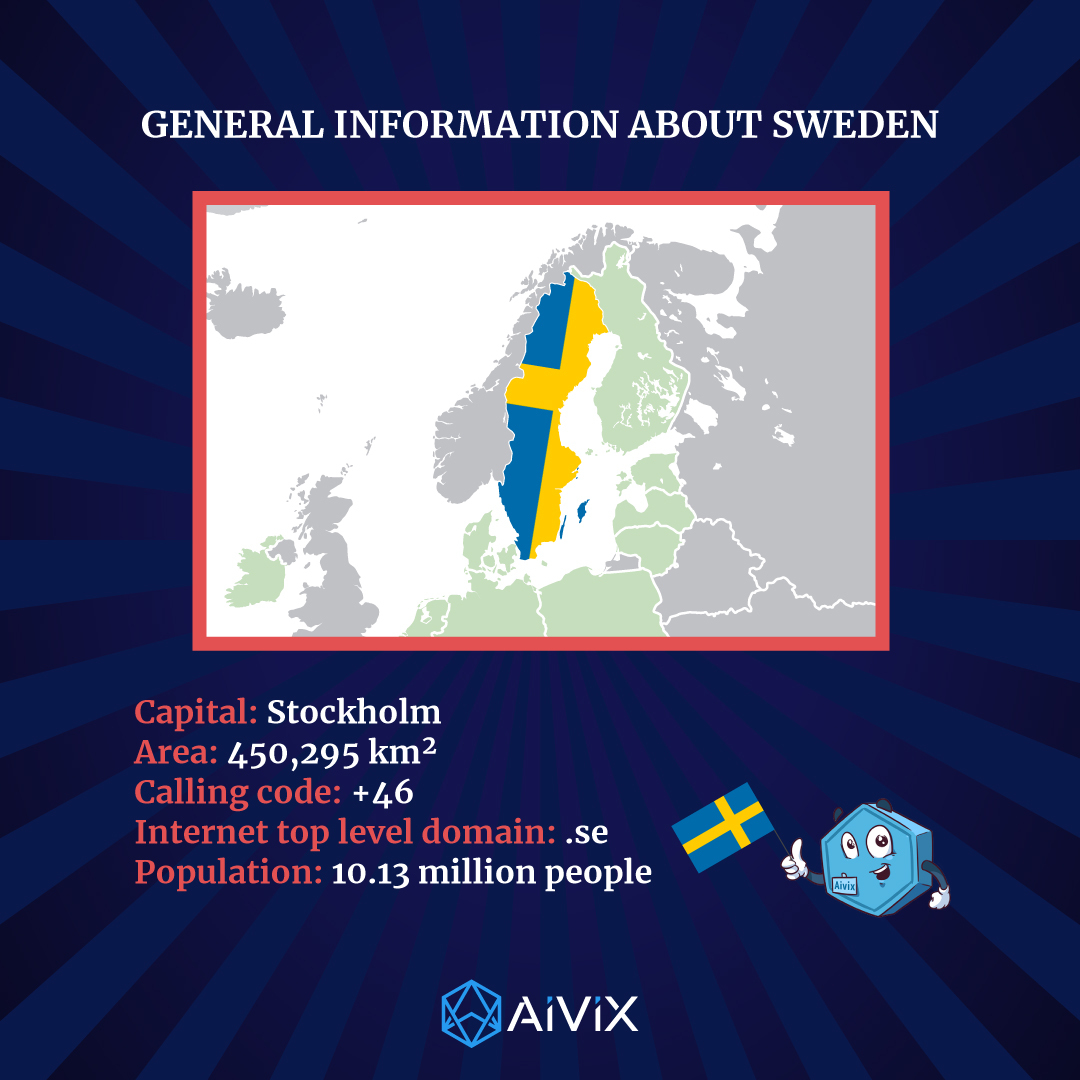 Due to low birth rates, the Swedish population is aging and will continue this trend if the birth rate does not increase.

Swedish is the official language of Sweden (first announced in 2009) and there are five recognized minority languages. Swedish dialects are varied to the point that they can be considered different languages.

The five listed minority languages include:

This language is spoken by about 9,000 people.

It is spoken by about 4,000 people and used by the Jewish people. 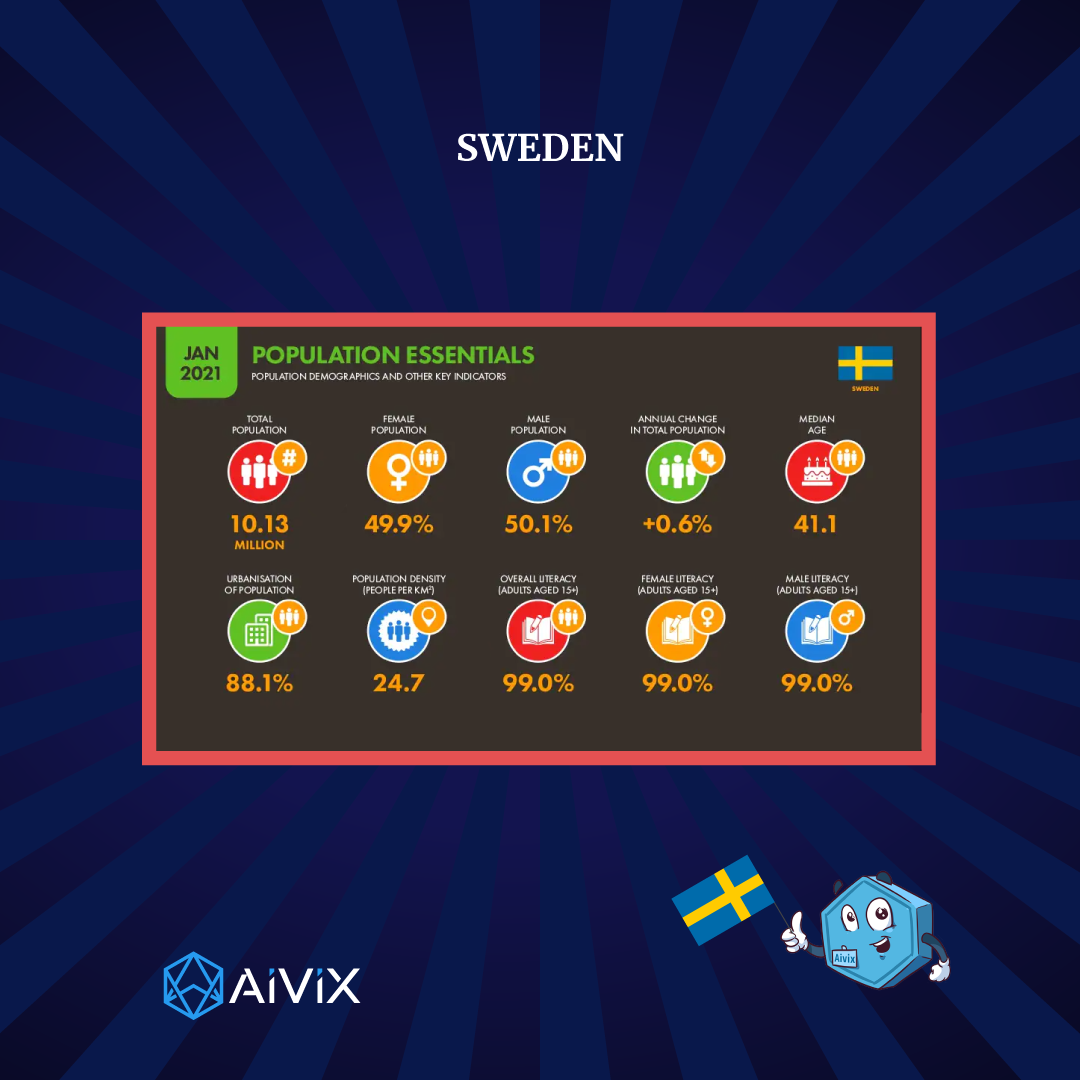 Sweden is part of the EU. Back in 2003, there was a referendum, and then the Swedes decided not to switch to a single currency, such as Euro.

All of this means that if you are planning a trip to Sweden, you need to get used to Sweden's own currency, the Swedish Krona.

The Internet in Sweden is used by 94.0% of the population, which is the fourth highest use in the world, behind only the Falkland Islands (96.9%), Iceland (96.0%) and Norway (95%). Sweden is ranked 18th and 5th in the world in terms of fixed and wireless broadband subscriptions. 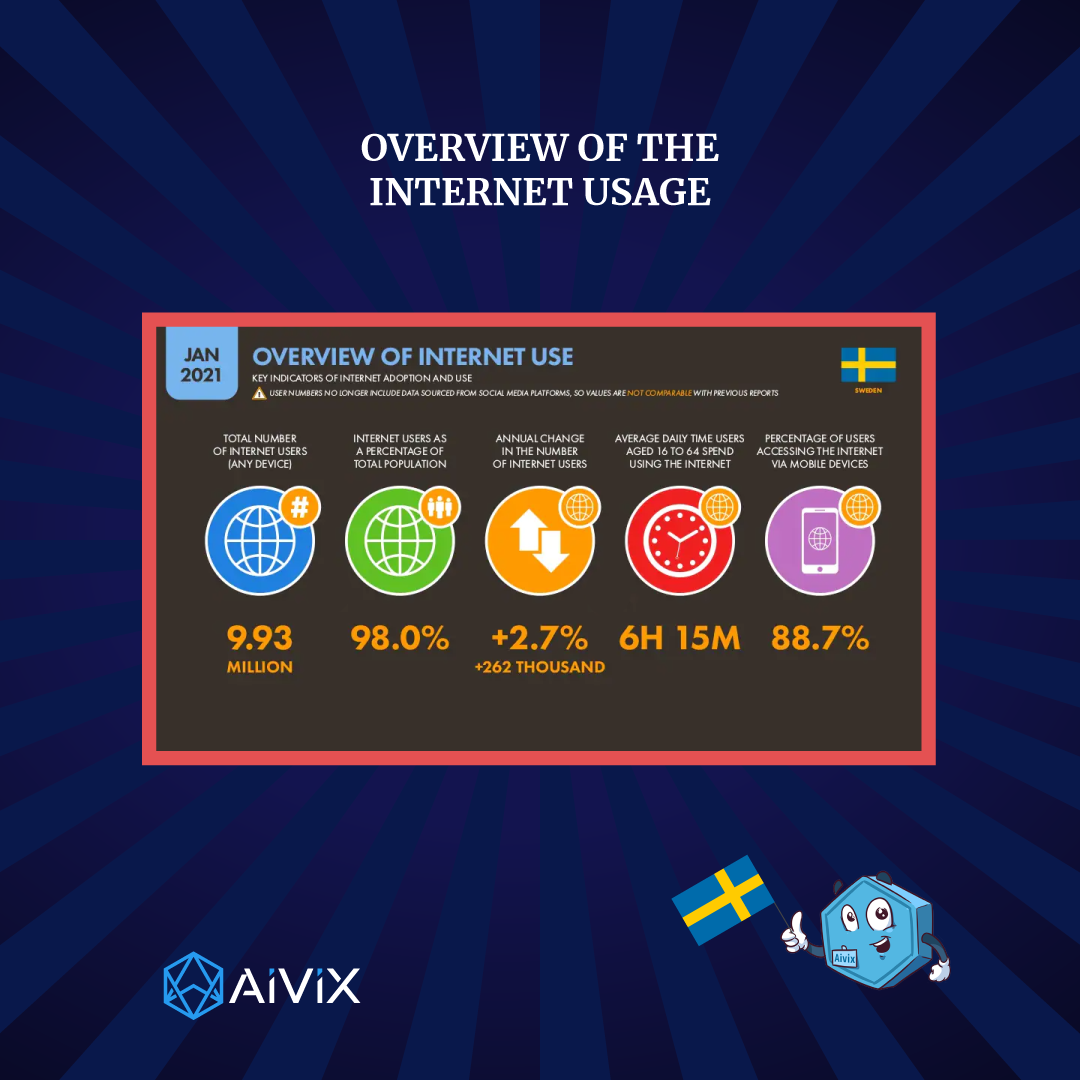 Sweden's gross national product (GNP) per capita is one of the highest in the world, as are its taxes. Most businesses are privately owned and market-oriented, but when transfer payments such as pensions, sickness benefits, and child benefits are taken into account, roughly three-fifths of gross domestic product (GDP) passes through the public sector. The costs of education, health care, and childcare are mostly covered by taxes.

How did Sweden get so rich? Sweden had just started to truly accumulate wealth when it began industrializing sometime in the middle of the 19th century. Thanks to good luck and favorable geographical position, Sweden had natural resources (iron ore and timber), which were necessary during the industrialization of countries such as Great Britain and Germany. 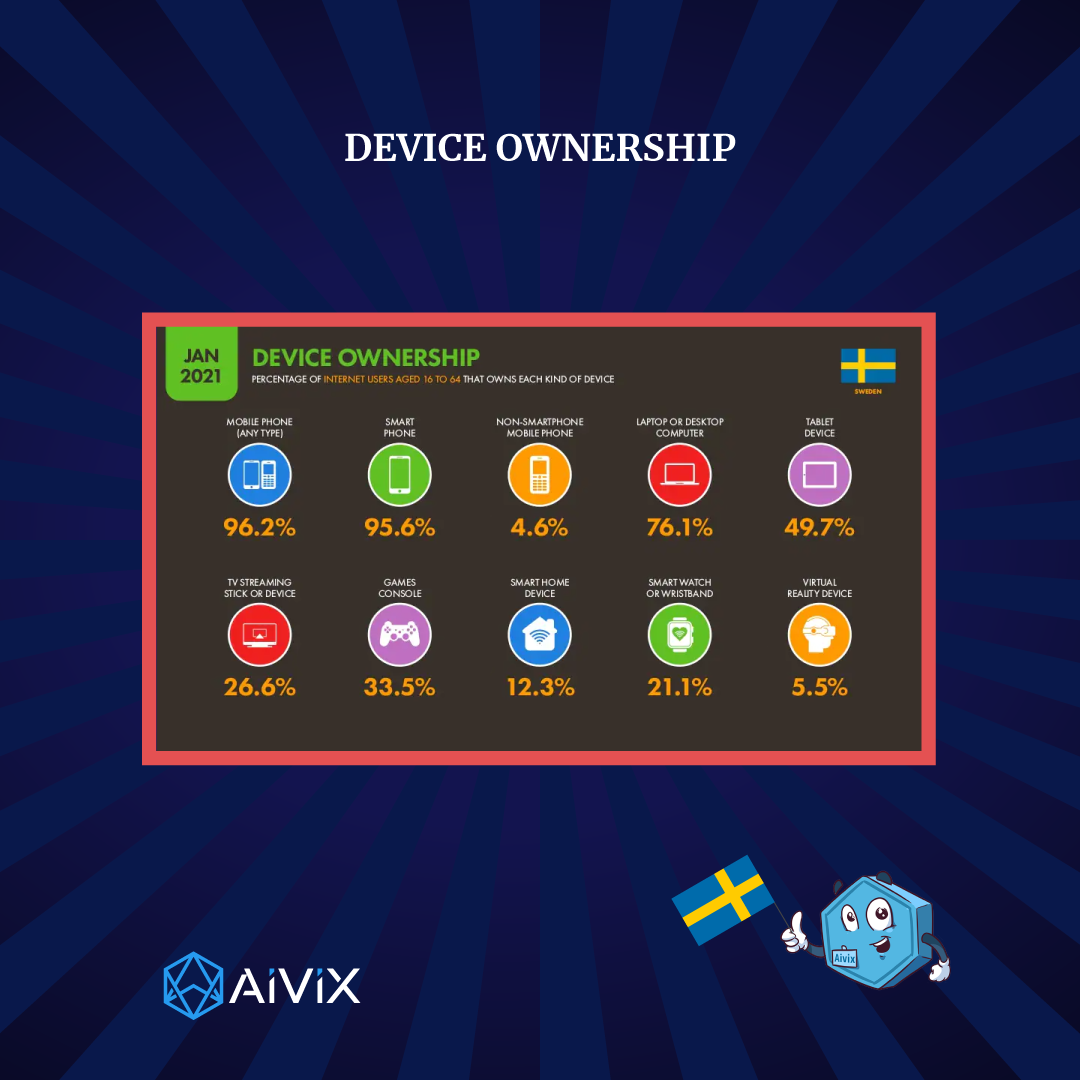 The average salary in Sweden is SEK 32,800 (€3,400), which is SEK 25,355 (€2,650) after tax. Salaries in the IT sector range from SEK 35,000 to SEK 55,000. Salary depends on age and work experience. Food in Sweden is very expensive but at the same time very high quality. The reason Swedish food is more expensive than imported food is because of its high government standards. 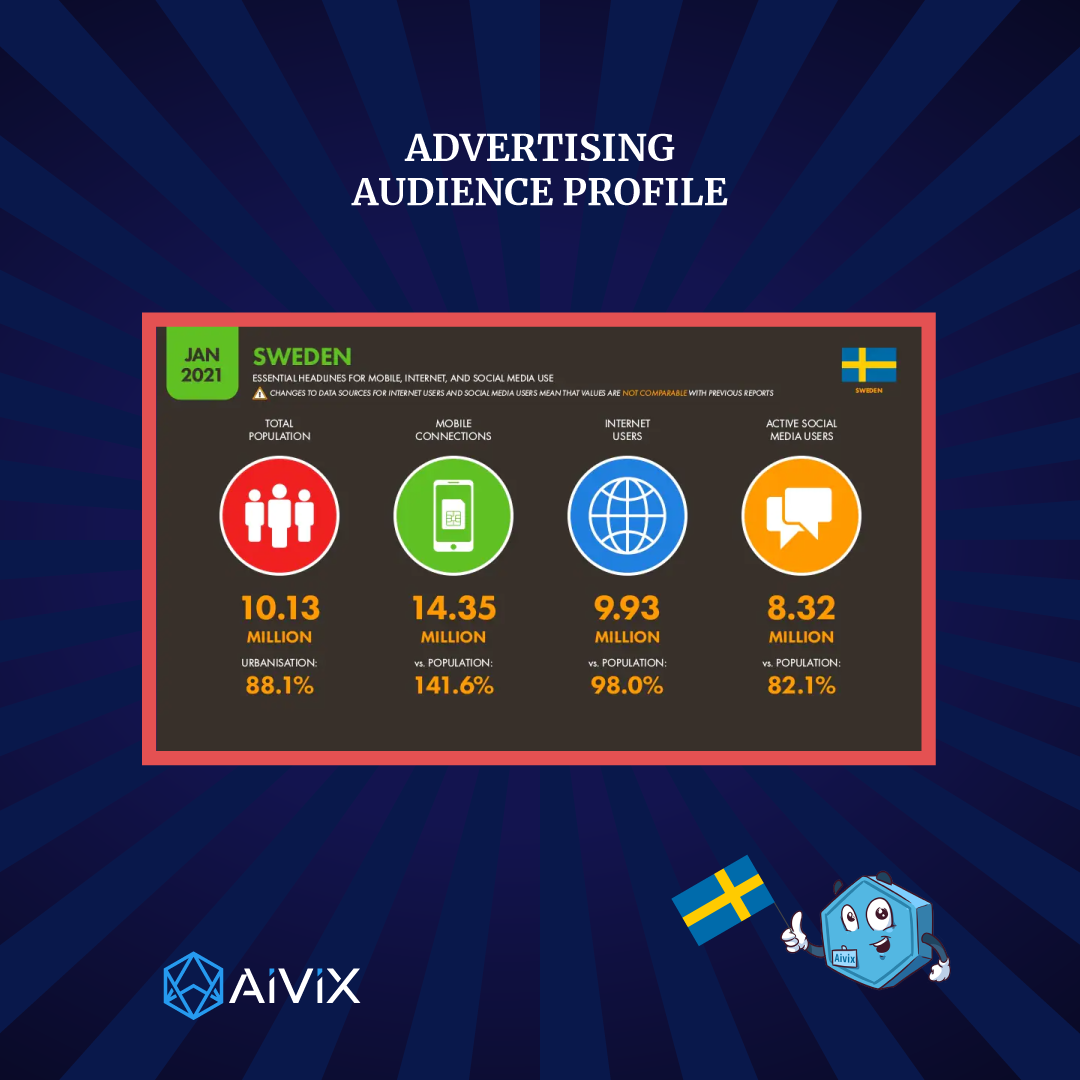 7. Working days and holidays in Sweden

Official holidays can be divided into Christian and non-Christian.

• The first Sunday after the spring full moon - Easter

• Sixth Thursday after - Easter Ascension of the Lord

• Saturday between October 31 and November 6 - All Saints Day

Avoiding excesses, maintaining a balance in everything — the residents of Sweden know how to maintain a balance between work and leisure, personal and social life, benefit and pleasure. The Lagom Swedish lifestyle is at the core of national well-being. To be content with what is necessary without overloading life with unnecessary details is the main feature of the Swedish mentality.

One of the key characteristics of Swedish culture is that Swedes are egalitarian in nature, humble, and find bragging completely unacceptable. In many ways, Swedes prefer to listen to others rather than make sure their voices are heard. During a conversation, the Swedes speak softly and calmly.

The Swedes support the principles of good nutrition, preferring simple and healthy foods. At a Swedish feast, it is not customary to cut a cake into pieces and put food on each other's plate - everyone chooses how much he wants to eat. If the food remains on the plate, this is no longer a lag — it means that you took more than you need.

The Internet is the highest advertising spending medium in Sweden. In 2020, total costs were down 5.2 percent from the previous year, reaching over SEK 38 billion.

The growing popularity of digital advertising

Media advertising spending in Sweden has grown steadily in recent years from SEK 32 billion in 2014 to nearly SEK 41 billion in 2019.

What products and services cannot be advertised?

Advertising that violates statutory regulations is also itself a violation of good marketing practices as set out in the Marketing Act. The following are examples of products that are subject to specific legislation that includes prohibited or controlled advertising rules:

• Tobacco products (although there are a few exceptions) under the Tobacco Law;

• Prescription medicines in accordance with the Medicines Act;

• Alcoholic drinks on television and radio in accordance with the Alcohol Act;

• Foreign lotteries in accordance with the Lottery Law. 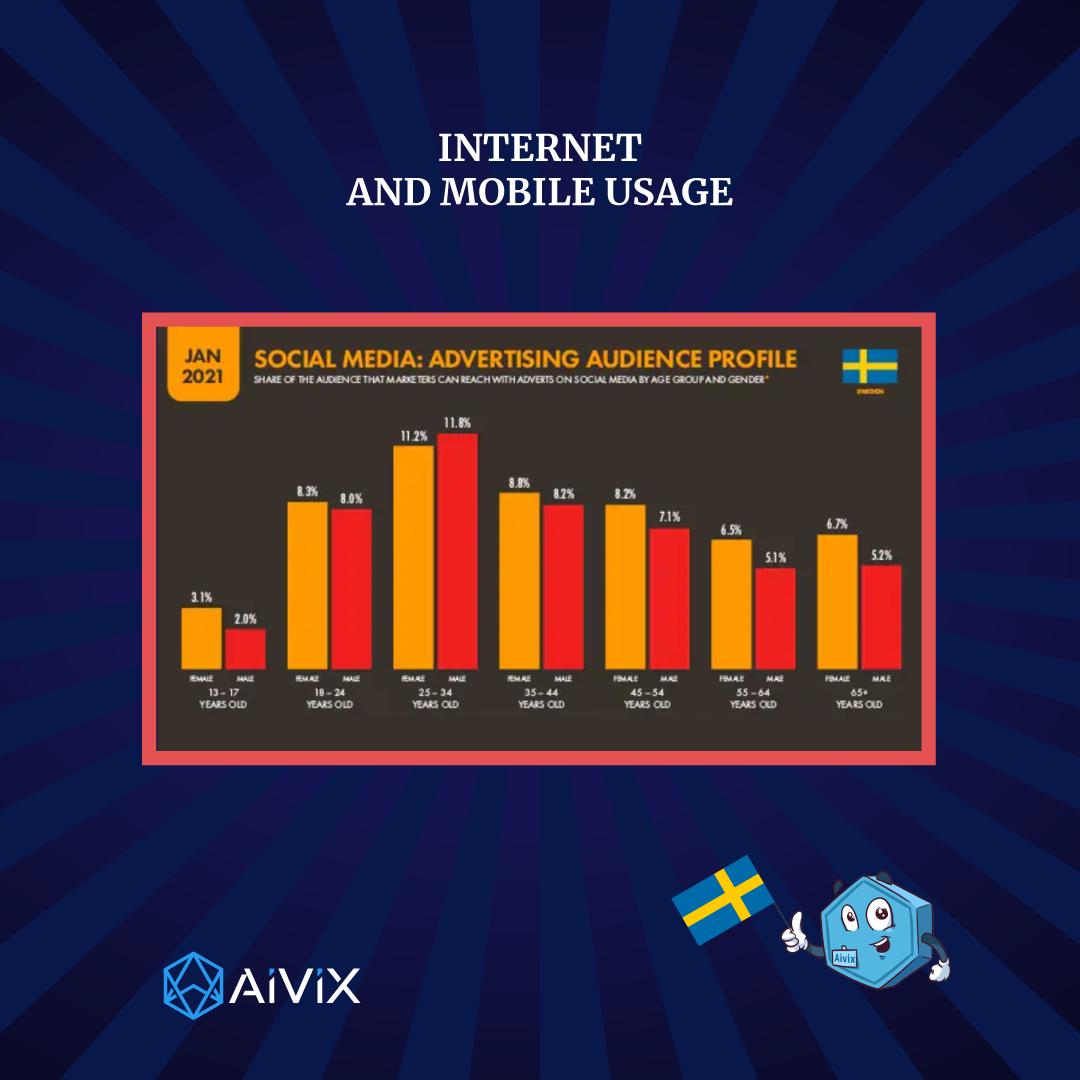 Sweden's financial regulator clarified that cryptocurrency investments are "unsuitable for most consumers" because "it is difficult, if not impossible, to assess them on a reliable basis." Cryptocurrency is difficult to value on a reliable basis because it has no real intrinsic value as it is not backed up by gold, silver, or the national government.

However, the Swedish central bank, Riksbank, indicated that it recognizes the potential benefits of cryptocurrency. Specifically, the Riksbank asked the Swedish parliament to invest SEK 30 million (or roughly $3.1 million) per year over five years to make Sweden a hub for digital currency innovation. If the Swedish government approves, Sweden will invest $15.5 million to fund and host cryptocurrency conferences over five years. In doing so, Riksbank intends to join Switzerland, Singapore, and Hong Kong in hosting the BIS innovation center for cryptocurrency.