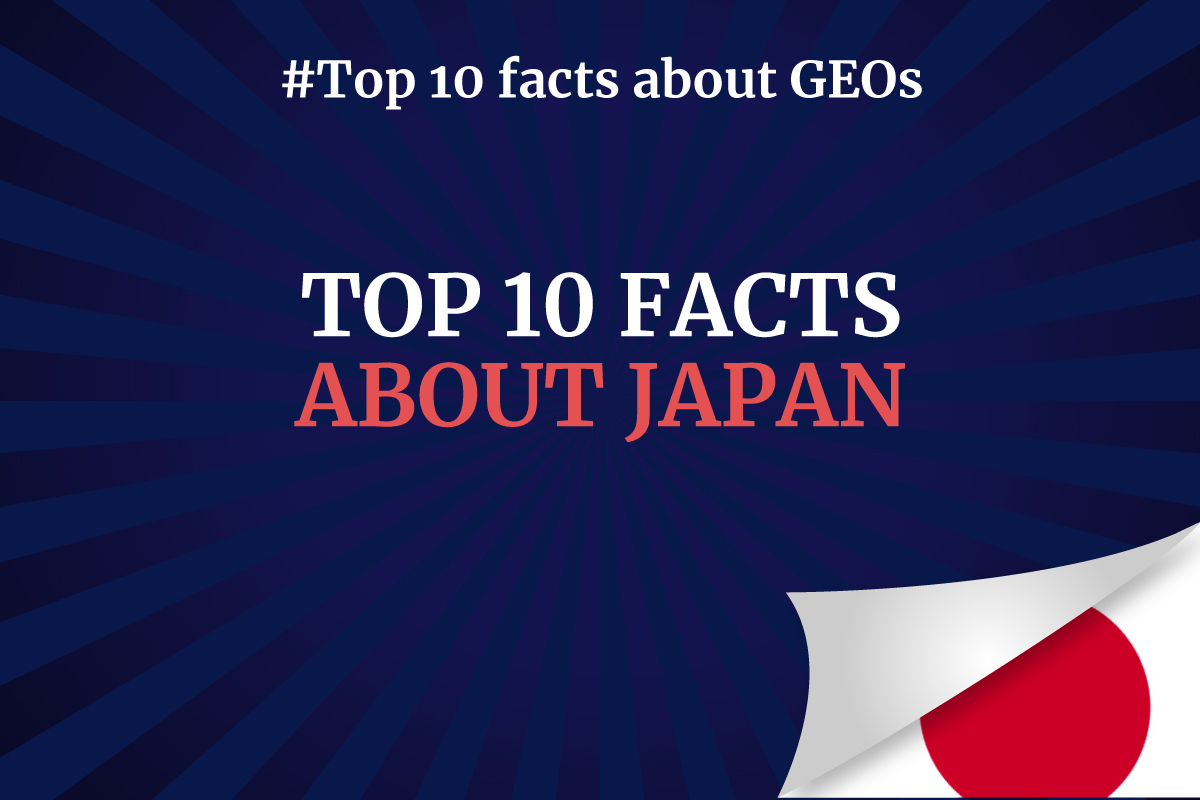 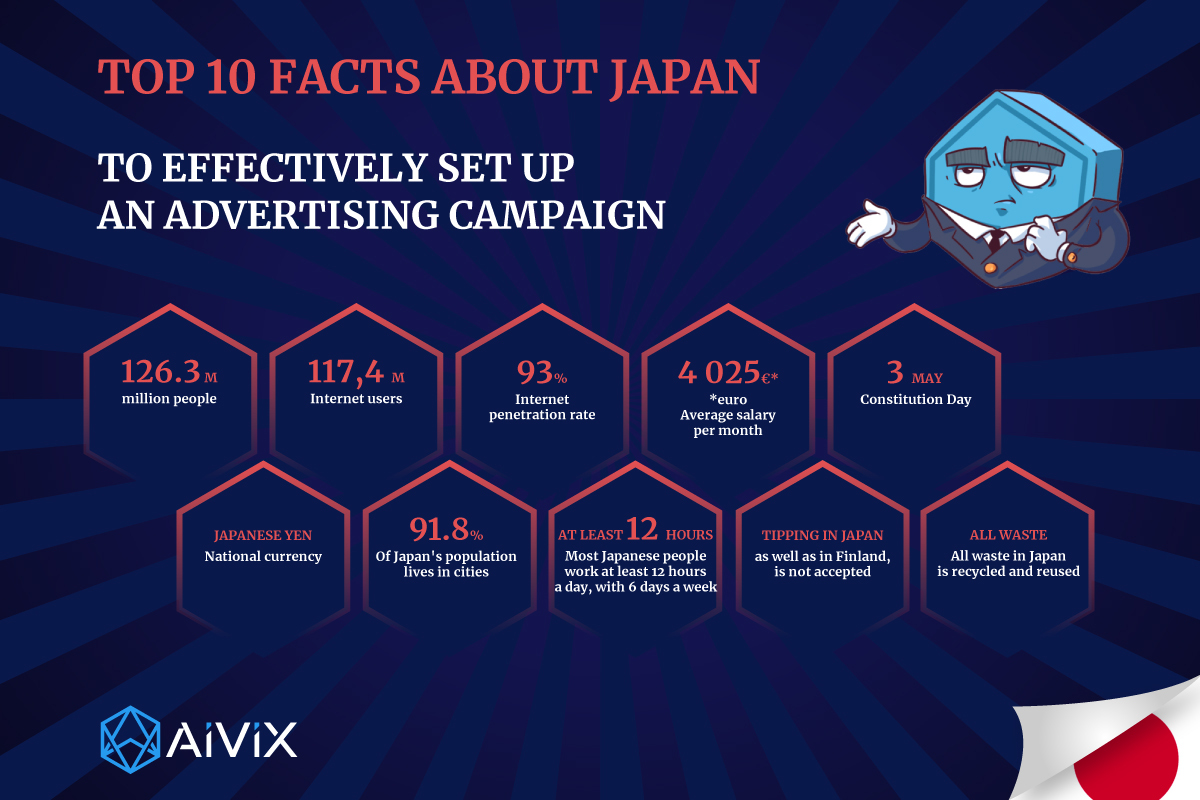 1. Geography and population of Japan

7. Working days and holidays in Japan

1. Geography and population of Japan

Japan is an island state located off the east coast of Asia. Almost all of the country's territory is occupied by the country's four main islands; from north to south there are Hokkaido, Honshu, Shikoku and Kyushu. The Japanese landscape is uneven, with more than four-fifths of the land surface being mountains. There are many active and dormant volcanoes, including Mount Fuji-san, which is Japan's tallest mountain at 12,388 feet (3,776 meters). Complexity and contrast are the main features of life in Japan. This is a country with complex and ancient cultural traditions, but since 1950 has become one of the most economically and technologically advanced societies in the world. 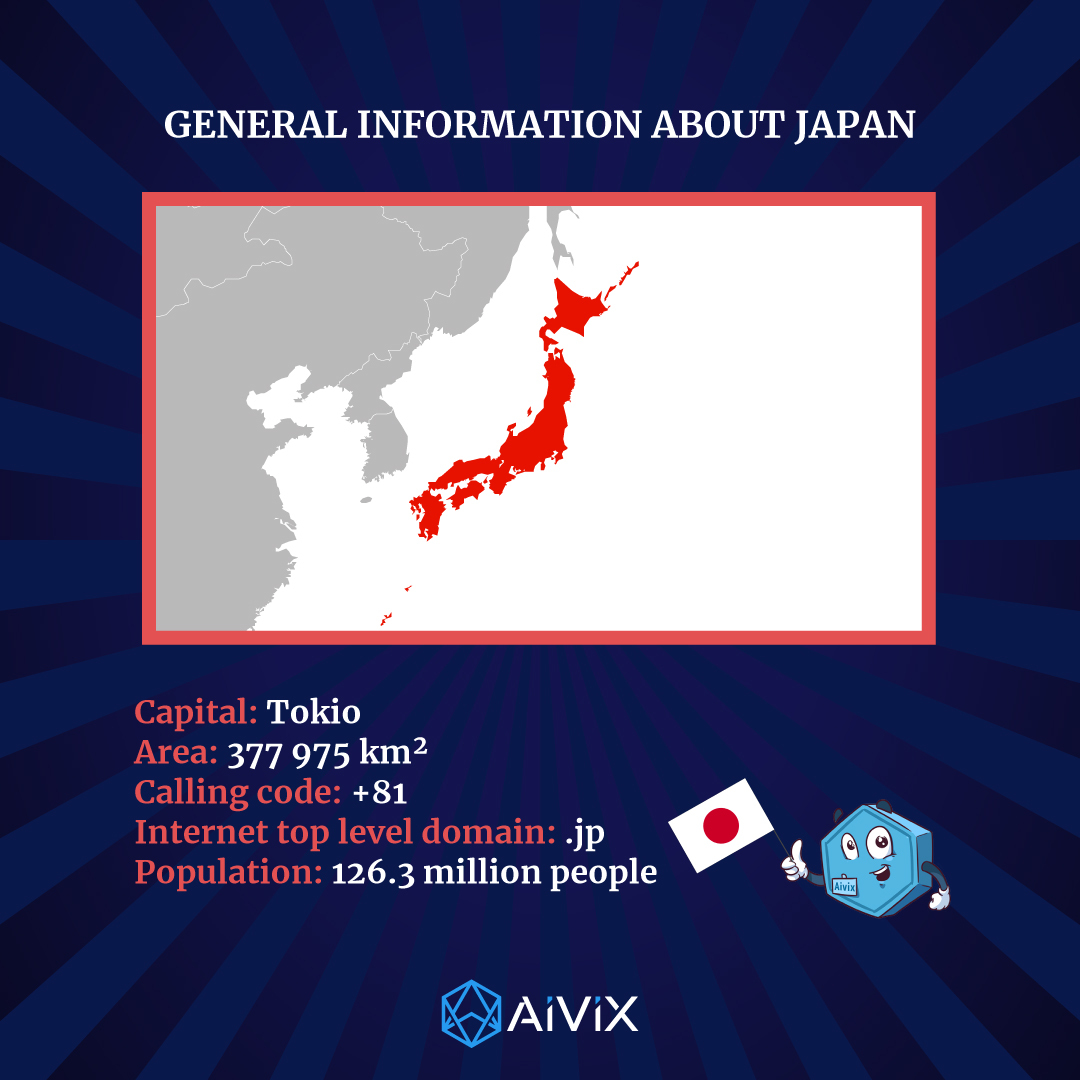 Japan has a large ethnically homogeneous population, which is largely concentrated in the low-lying areas along the Pacific coast of Honshu.

2. The official language of Japan

• The Ryukyuan languages are part of the Japanese family, although they are incomprehensible to those who speak Standard Japanese.

• Many dialects are spoken in Japan, and some of them, according to UNESCO, is threatened with extinction due to the introduction of the standard Japanese language in schools throughout the country.

It's no surprise that Japanese is the dominant language in Japan, and no one knows exactly how it originated in the country. What is known is that the people who inhabited the area a long time ago spoke a different language that was lost over time. Researchers believe that what we now call Japanese was brought in by people who migrated from mainland Asia or the Pacific islands. It somehow became the dominant form of communication as Japanese culture developed. 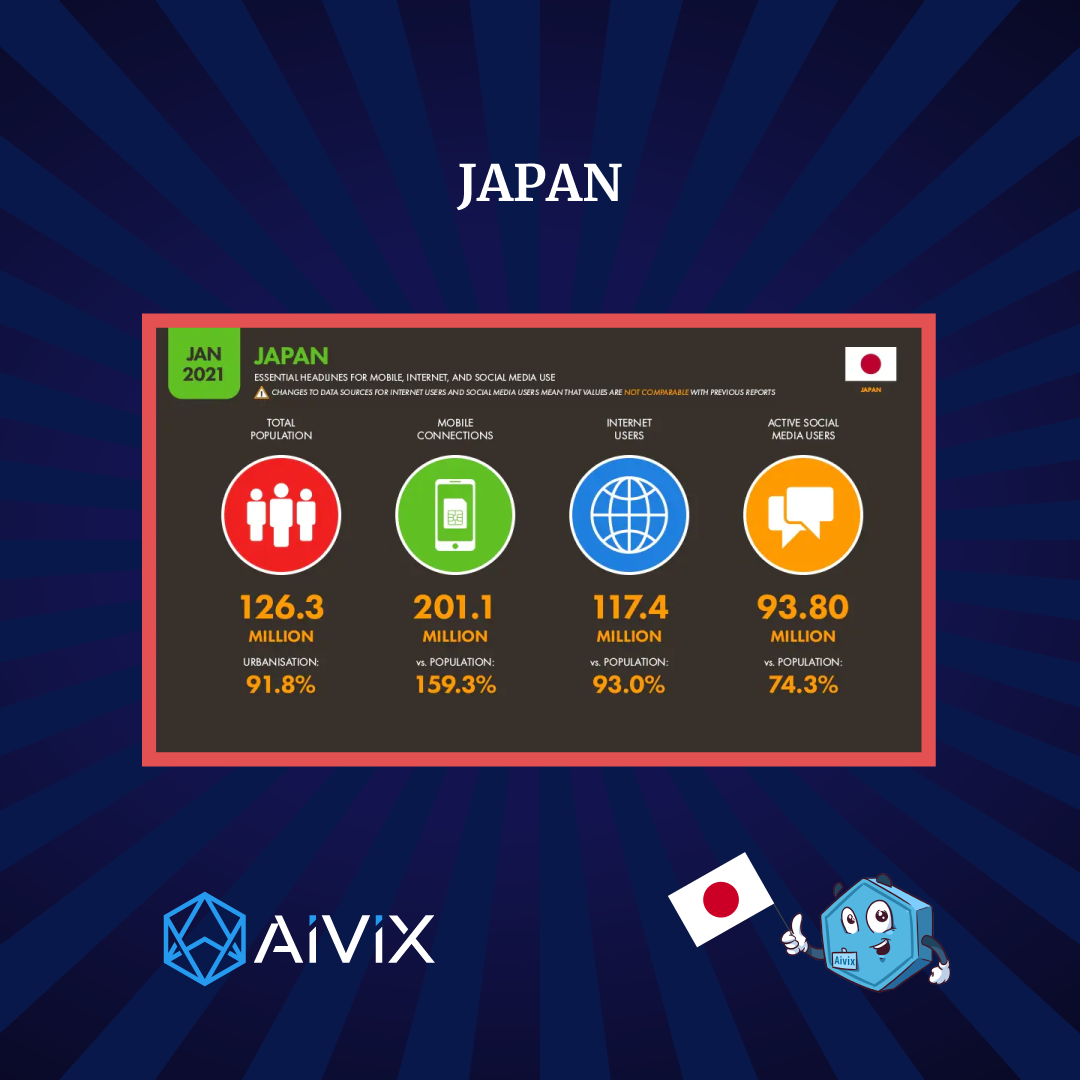 The word "Yen" means "circle" or "round object". This currency was officially adopted by the Meiji government in the New Currency Act of 1871 in the hope of stabilizing the country's monetary situation at that time.

The Yen is the 3rd largest currency in the international foreign exchange market after the USD and the Euro. 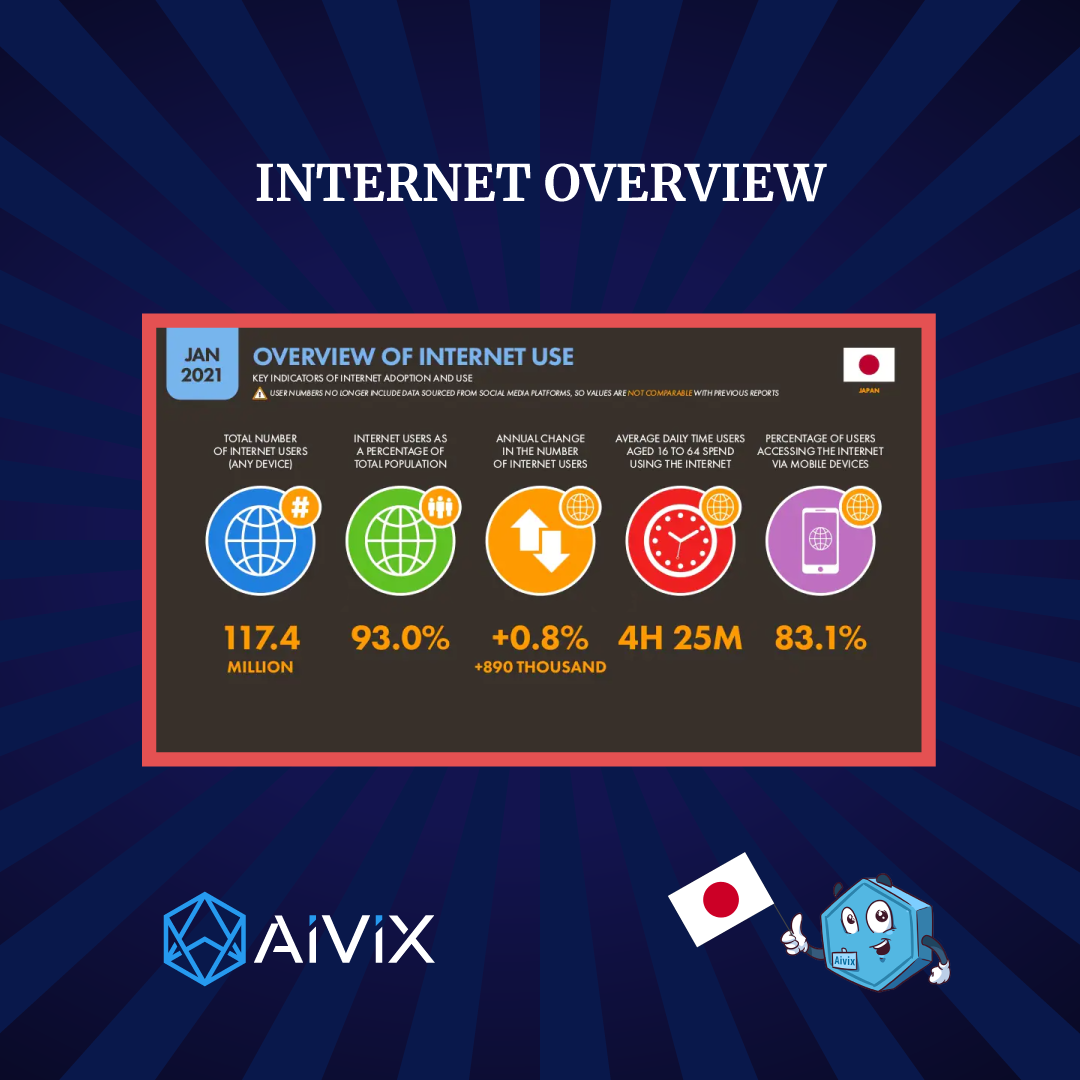 Japan is one of the highest Internet users in the Asia Pacific region. The country has a very high Internet use rate, although this rate depends on factors such as age, region, and income level.

Most people use the Internet to chat, share videos, or buy goods and services. Among social networks, Twitter and Instagram are highly popular, while line continues to have the dominant messaging application. Google topped the list of the most popular websites, followed by Yahoo, YouTube, and Twitter. Streaming services are also becoming popular.

The COVID-19 pandemic has hit the economy hard, triggering a marked recession. Economic activity fell as sanitary restrictions cut consumption and investment. The most affected were workers without wages. However, strong government support and opening up of the economy led to a partial recovery. Growth will gain momentum due to macroeconomic policies and progress in vaccinations.

The re-imposition and extension of the fourth state of emergency in July held back economic recovery. Significant progress in vaccinations and declining infection rates are now helping to resume stronger consumption growth and increased investment as supply chain disruptions are resolved. The new course of economic policy is expected to increase activity. As a result, the economy is projected to grow by 1.8% in 2021, 3.4% in 2022 and 1.1% in 2023. 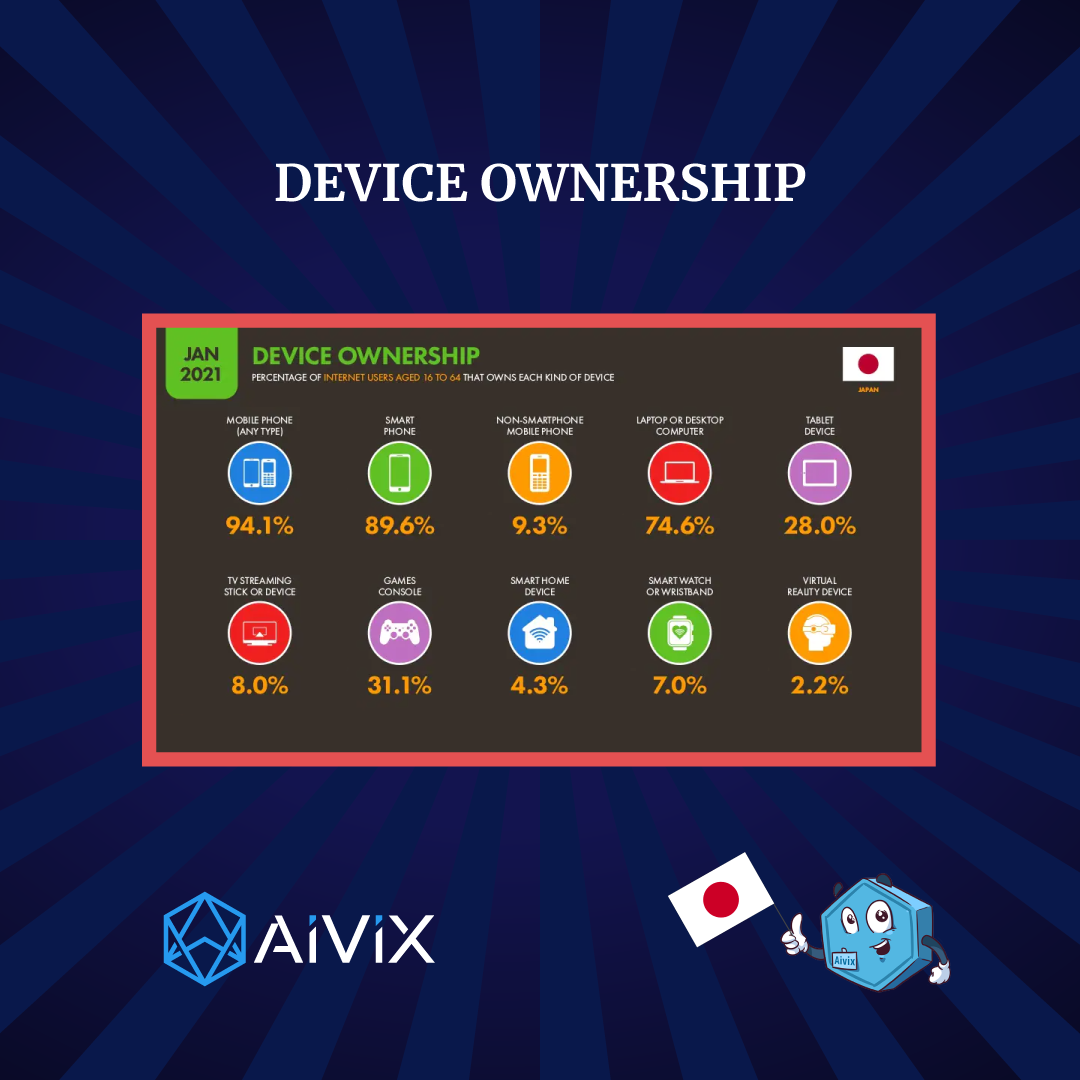 7. Working days and holidays in Japan

Japanese culture is very ancient and filled with rituals and traditions. Since Japan is an island country, it has been able to contain the influence of other cultures for centuries.

Japanese traditions and culture are influenced by two main religions: Shinto and Buddhism. Shinto has been practiced in Japan for over 2,000 years. Simply put, Shinto is a belief in kami (in Gods). Since Shinto has a lot to do with ritual, some Japanese people may think that it is not a religion at all, but rather a way to glorify many of Japan's social traditions. For this reason, Buddhism can be practiced alongside Shinto customs.

Core values are thinking about others, doing your best, not giving up, respecting your elders, knowing your role, and working as a team. These concepts are taught directly and indirectly from kindergarten to the working world. From a very early age, Japanese children are taught omoyari (noticing and thinking about others). Students must pass challenging entrance exams to advance to the next level of education, and in the process, they learn that ganbaru (effort) and gaman (resilience) are more important than innate ability to achieve their goals. 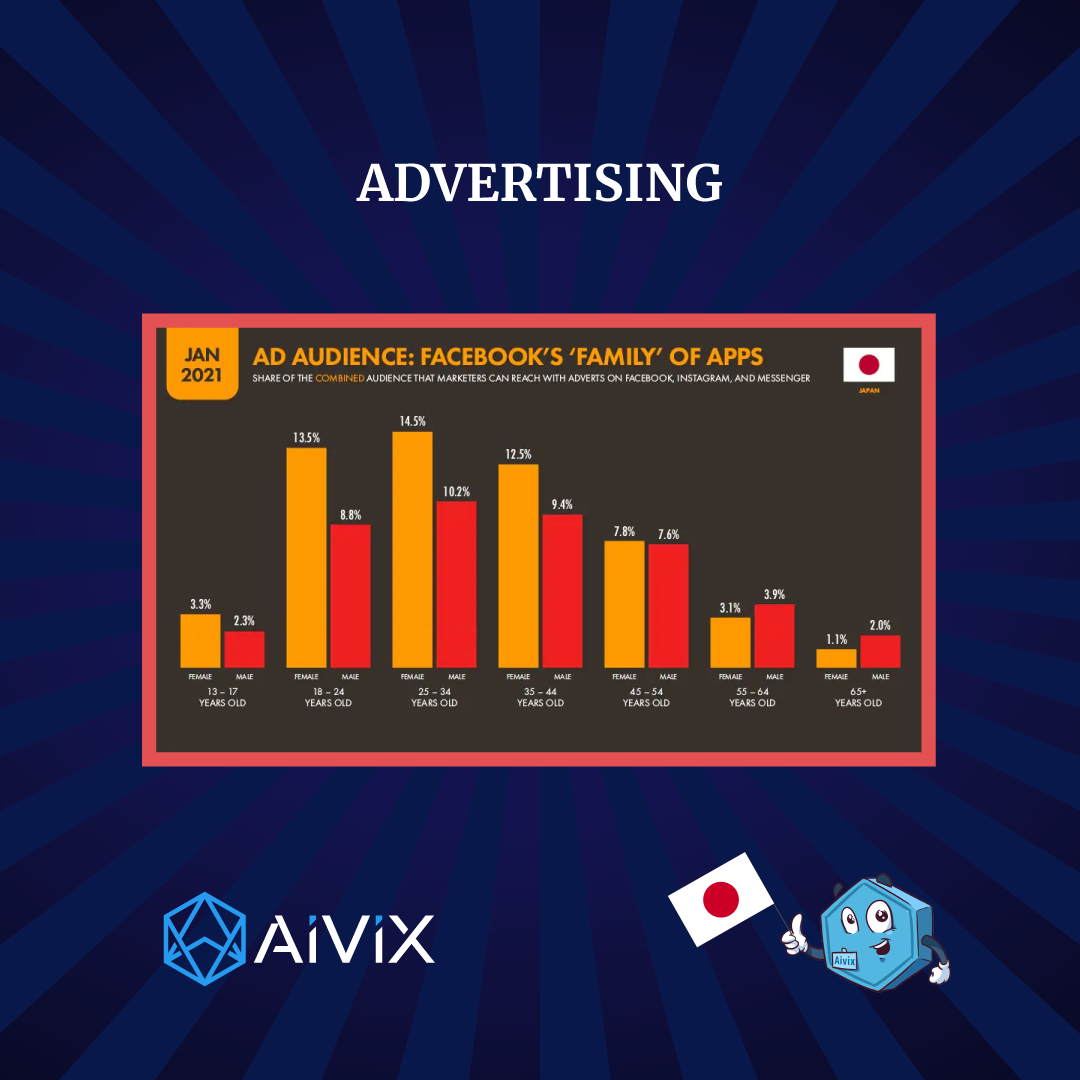 Digital marketing in Japan is changing the way many industries interact with their customers, allowing them to communicate with each other at the click of a mouse. The rise in social media influencers, brand Twitter accounts, increased availability of in-house recording studios to create digital signage, and a wide variety of virtual events to choose from, all contribute to Japan's steady growth in digitalization through its marketing strategies.

Since the outbreak of the pandemic in 2020, 58% more people have started using their Twitter accounts. Instagram is also not losing popularity and is fighting its competitor Tik Tok quite successfully thanks to reels. Last but not least, Facebook. Facebook is still popular with people over 30 in Japan. At the same time, for Japanese businesses, it has become something of an alternative to LinkedIn.

Video ads also take up the majority of the ad market in Japan. Bright video content always has a positive effect on the brand image.

It may not come as a surprise that in 2021 it will be difficult to host large-scale personal events with vast showrooms and multiple stands. Therefore, virtual events are gaining popularity.

With one of the most advanced regulatory environments for cryptocurrencies, Japan recognizes Bitcoin and other virtual assets as legal assets under the Payment Services Act (PSA). Crypto exchanges in Japan are required to register and follow traditional anti-money laundering/ terrorist financing (AML/ CFT) obligations under this legislation. In December 2017, the National Tax Agency determined that cryptocurrency income should be classified as “other income,” and buyers should be compensated accordingly.

While exchanges are allowed in Japan, laws regarding cryptocurrencies have become a national priority after a series of high-profile violations, including the robbery of a $ 530 million digital currency.