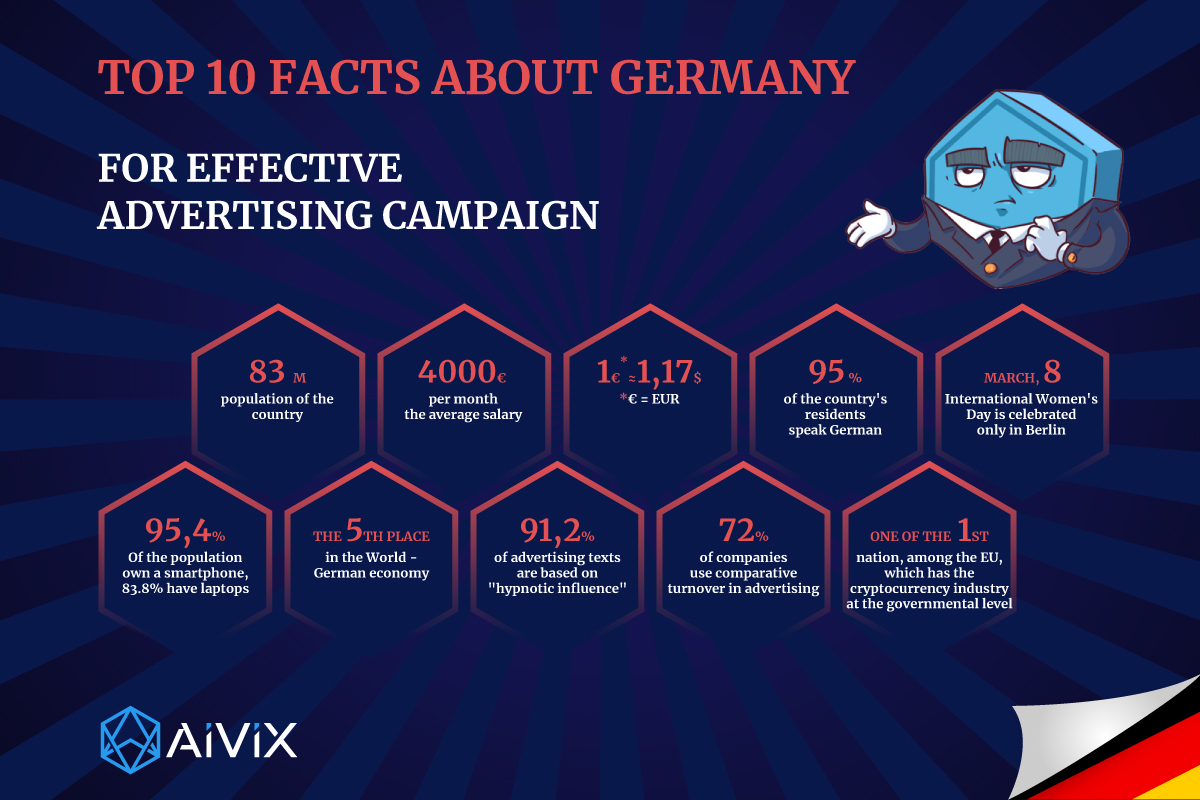 1. Geography and population in Germany

7. Working days and holidays in Germany

1. Geography and population in Germany

The population of the Federal Republic of Germany is more than 83 million people (2021). Germany is the most populous country in the European Union and the second most populous in Europe. On May 9, 2011, for the first time since the unification of Germany, a general population census was carried out.

Germany is the second most popular immigration country in the world after the United States. According to 2013 data, out of 8.1 million families with minor children, about 2.5 million families (31%) had migrant roots, that is, at least one of the parents was either a foreigner or a migrant who took German citizenship, or is a German immigrant from countries of the USSR or Eastern Europe.

At the same time, the total number of families with minor children decreased compared to 2005, when there were 8.9 million. According to official data, in 2013, 29.6 million migrants and their descendants lived in Germany (including 12.1 million migrants holding German citizenship), which is 25.6% of the population of Germany. Of these, about 7.2 million people are descendants of migrants and were already born in Germany.

In 2015, the share of the population with migratory roots was 21% (including 36% in the “children under 5” group). As of 2016, total immigrants and their direct descendants (including ethnic German repatriates) accounted for 18.6 million, or 22.5% of the German population. As of 2021, according to UN estimates, Germany was home to 13.1 million immigrants and their descendants, or 15.7% of the country's population. 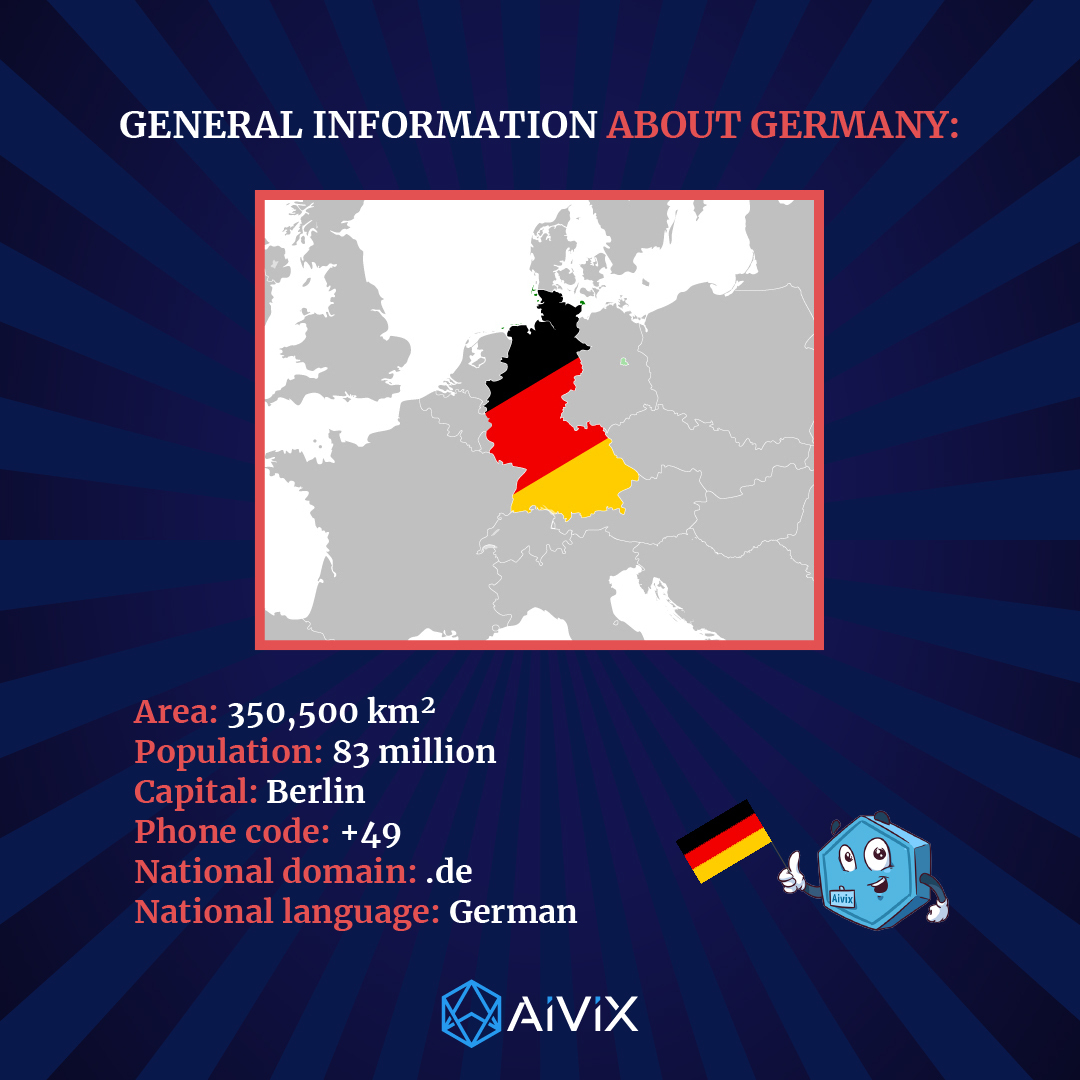 The official language of Germany is German, which is spoken by over 95% of the country's residents. In official documents and office work, literary German is used - Hochdeutsch, which means "high German". Along with this, the population uses Low, Middle and High German dialects (10 main and more than 50 local ones, which are also spoken by residents of border regions of neighboring states. There are mixed varieties. The recognized languages of national minorities include Danish, Frisian and Lusatian, as well as a regional language - the Lower Saxon language, which has been recognized by the EU since 1994.

The fact is that Germany is joining the Eurozone, the official German currency is the euro (EUR). The Germans made the transition to euro money back in 2002, until that moment the country used its own national currency (the predecessor of the euro) - the German mark. At the moment, the brand is completely withdrawn from circulation, and all settlement operations in the country are carried out in euros.

There are several large providers in Germany that share the majority of their users. But the overall quality of the infrastructure can be called relatively low, especially for a country with one of the strongest economies in the world. For example, be prepared to pay out an average of €30 for a broadband connection of around 16 Mbps.

In general, all Internet service providers in Germany have approximately the same price range for similar offer packages. So, when choosing a provider, you should focus primarily on the speed of customer service and the speed of establishing a connection. 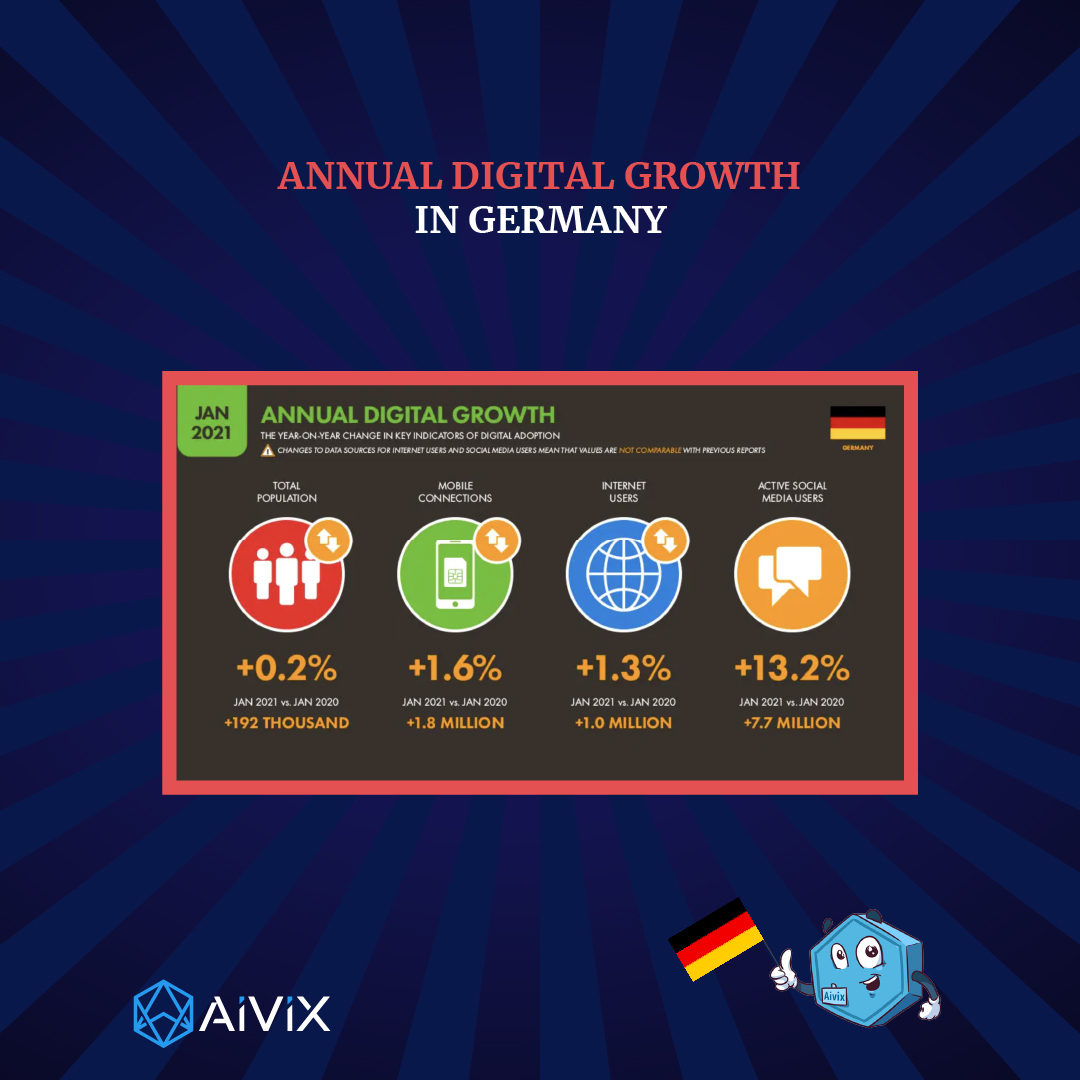 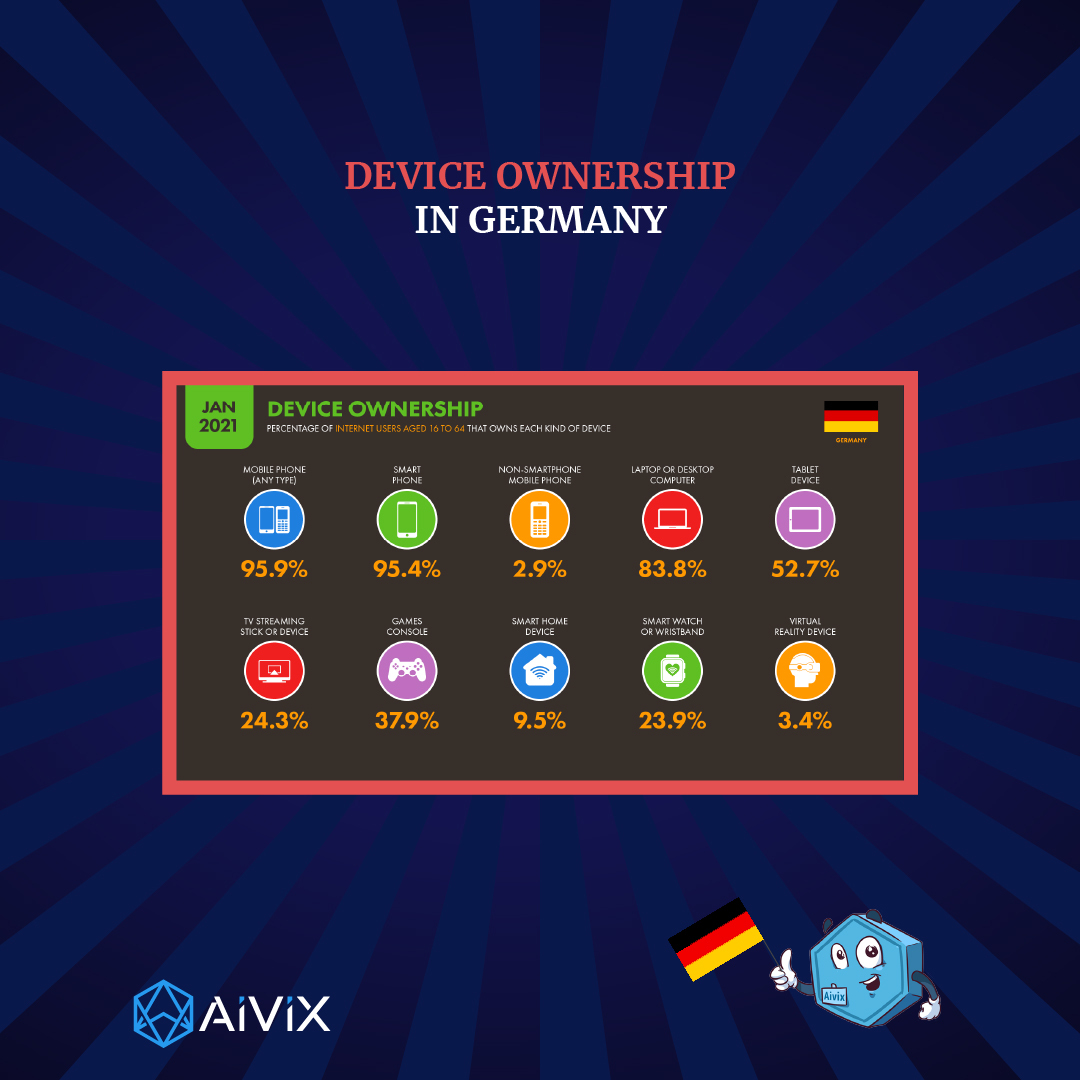 The German economy - the fifth largest economy in the world (measured at purchasing power parity) and the largest in Europe - is the largest exporter of machinery, vehicles, chemicals, and household appliances. The German economy is organized according to the principle of a social market economy, characterized by a combination of social balance and market freedom. This economic model presupposes largely free action of market forces, however, the main emphasis is on social security. Also, the German economy is characterized by a high degree of industrialization. In comparison with many developed countries of the world, here a very large share in the production of GDP is made by industry - the main direction of Germany's specialization in the world economy. Imports ($1.1 trillion) include a large share of hydrocarbons (oil and gas), transport equipment, electrical equipment, and agricultural products. The main import partners are Russia (12%), France (9%), Belgium (8%).

The entire economy is built on socio-economic principles with a predominance of market structure, freedom and social balance. These principles were developed back in 1947-1949 in the post-war reconstruction of the country. According to these principles, free market relations are implemented, but the main forces are aimed at decent social security. This model implies the development of the economy, stable economic growth and an even distribution of wealth among the population. Germany belongs to the post-industrial countries, where the economy is dominated by services. By shares in the country's economy, the following distribution is:

- Agriculture - 0.1% (the same number of economically active population works in this industry) 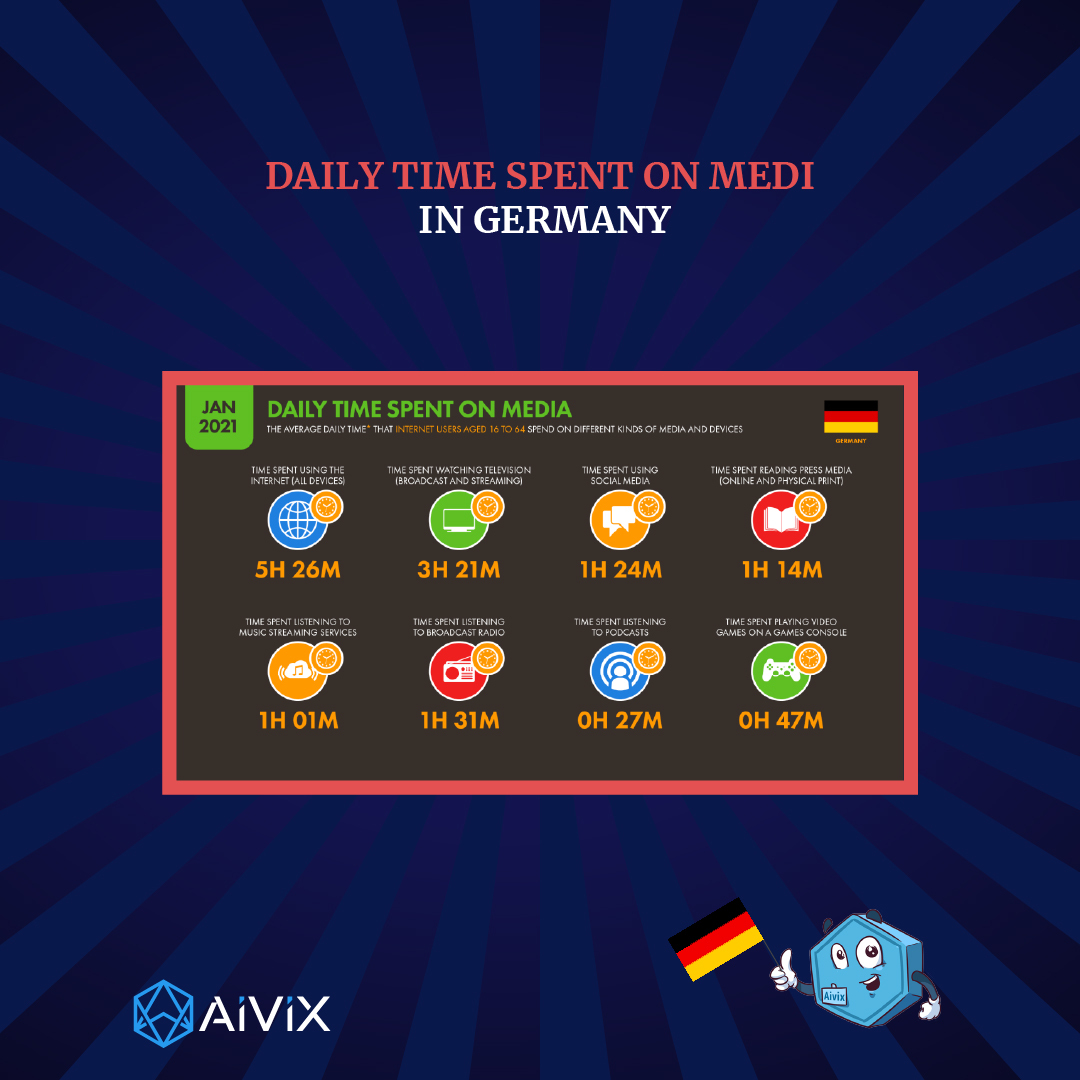 Ranking of workers' incomes, calculated by region. The highest wages are at the top of the list:

7. Working days and holidays in Germany

Germans all over the world are considered to be workaholics, but in reality in Germany they work not more than 35 hours a week. Moreover, the working day is built in an unusual way for us: it is divided into 2 parts. First, the Germans work from 9 to 13 hours, then a 3-4 hours lunch break, and in the evening the workers return to spend about three more hours at the workplace.

The residents of Germany are law-abiding citizens. They try not to break the rules, which they have been taught to follow since childhood. Besides, Germans are big bureaucrats.

The main features of the population:

1) Straightforwardness is a national trait of all those who were born and live in Germany. Surprisingly, Germans do not expect the same from other nationalities. Germany is extremely tolerant of people of other ethnic groups. Perhaps this is due to the memory of the Second World War, or to the fact that the Germans consider themselves quite progressive people. Communication between two acquaintances in Germany takes place without hints and semitones. Germans will not be frank with strangers. They, in general, take great care of the privacy of other people.

2) Punctuality is a common feature of the entire German population. Being late for work is a serious offense and is likely to result in a fine. If the reason for the delay was insurmountable circumstances, such as traffic jams, a breakdown in vehicles or a delay in an intercity train, then the Germans will not condemn the latecomer for his act. But, when a person comes to work at least 10 minutes later due to the fact that he spent half the night in a bar, this can cause public censure.

3) The law-abidingness of the Germans is literally the fairy tale. Coming to Germany, foreigners note the scale and sluggishness of the bureaucratic system of this country. To rent a house or get a job, you will have to fill out a huge amount of paperwork.

4) In the homes and offices of Germany, every item has its own place. Even a simple scoop has a separate hook, and if after use someone places it next to it, and does not hang it on the wall, it will be considered an untidy person. The Germans' desire for order is thought out to the smallest detail. Containers for separating garbage, a storage system, environmental concerns are common and familiar to them. Young people in Germany often join various groups that fight for a cleaner environment. 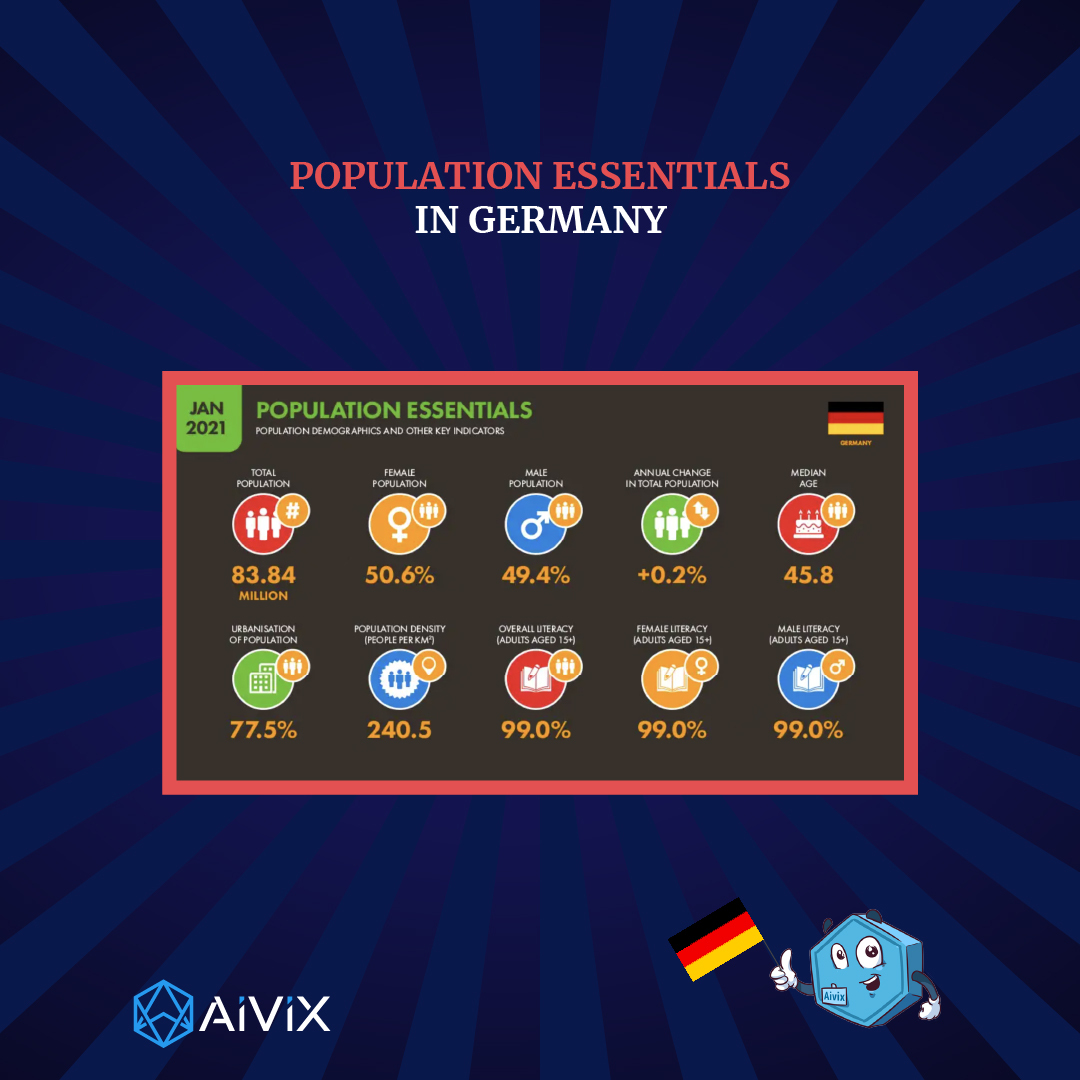 Advertising in Germany is very developed, it occupies one of the leading positions in the global industry. The mastery of copywriting mastered by copywriters gave advertising a powerful impetus. German news and informative texts are distinguished by their non-standard nature, the use of a variety of language tools and the lack of templates. Out of 100% of analyzed advertisements, only 8.8% are “high-end advertisements”, consisting of an image and a product name. 91.2% of the texts are based on the so-called "hypnotic influence". The methods of hypnotic influence include truism (hypnotic replacement of the command) - 10.6%; the illusion of choice (within the framework of this strategy, the client is offered a choice between “what the seller needs and what the seller needs”) - 6.1%; assumptions (a command is presented as a preliminary action or a condition for performing some other action less significant than the required command) - 8.3%; the use of opposites (the use of the turnover "the more ..., the more ...") - 0.7%; the use of explicit or implicit comparisons (to distinguish a trademark favorably from competitors' brands) - 72%. All of the above figures are linguistic manipulation techniques. The peculiarities of the language and the principles of its use are used to indirectly influence the addressee. Advertising has a stable terminological base. There is an active use of neologisms in the German language. Some of them are formed on the basis of their own lexical base, others - on the basis of borrowings. Foreign language vocabulary is found in 49% of the studied advertisements.

Mass advertising in Germany is mainly distributed using printed products: booklets, brochures, flyers and leaflets are distributed to mailboxes, on which, meanwhile, you can often find a sticker of the “not for advertising” type. Let's start with the simplest example - street signs. The Germans are very pedantic, almost every house has its own sign, outdoor signs are used everywhere. But unlike the color palette of our capital Moscow, in Germany all advertising signs have an important distinctive feature - they do not complement the style of the building, but disharmonize with the general style of architecture.

A distinctive feature of almost all facade plates is the use of light airy materials, namely plexiglass and outboard holders. Large format printing is not popular in Germany - there are few billboards. And if they do meet, it means that the time of their placement is limited to 1-2 days. Moreover, the cost of such a service is quite high. Streamers and city lights are practically not found on the streets of German cities. But here in demand are poster stands, on which you can find commercial graphic advertisements - leaflets and posters.

If we talk about the preferred colors for advertising in Germany, then this is definitely red. Its main function is to induce action. 80% of Germans choose this color when shopping. 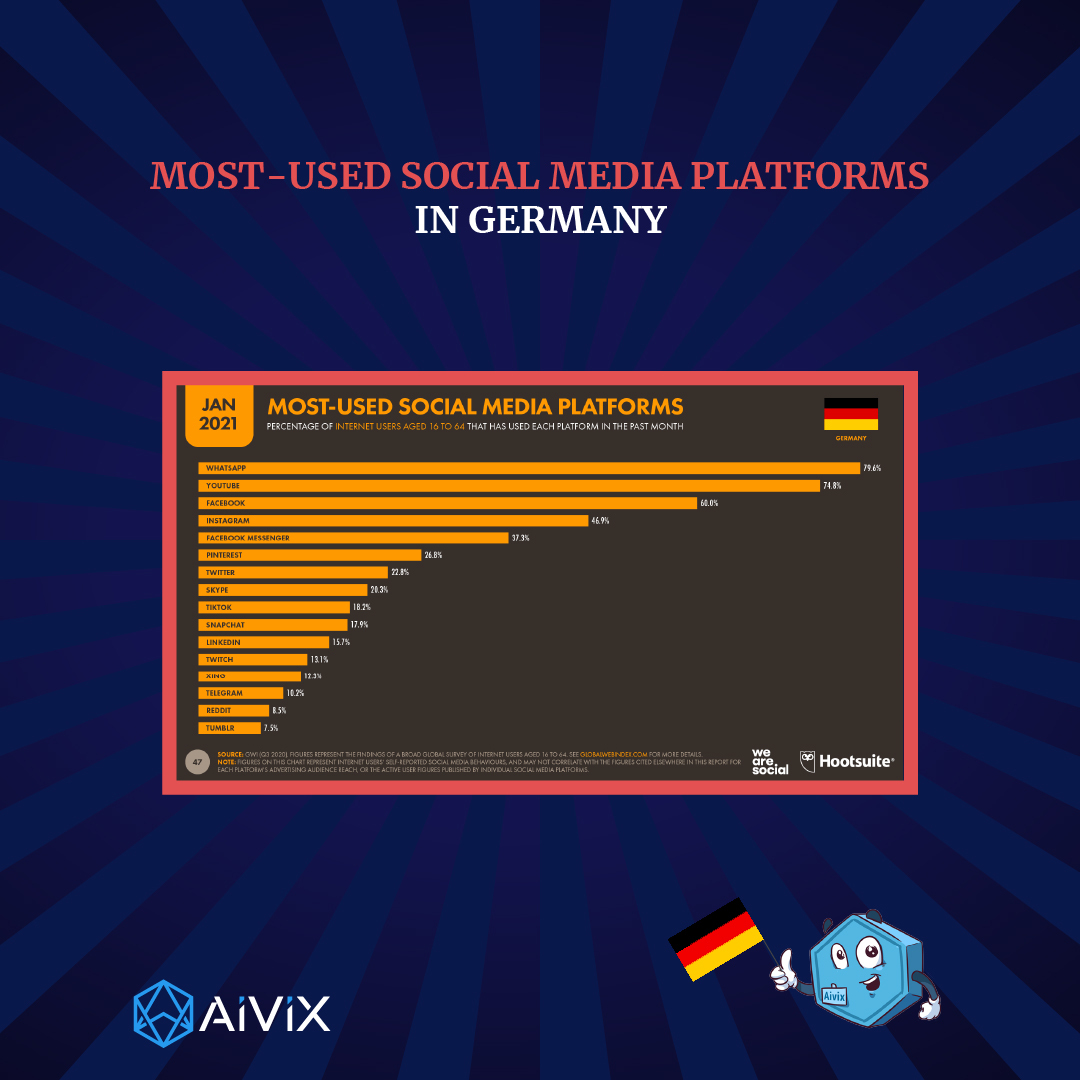 On the European continent, it was Germany that became one of the first states that launched the legal regulation of cryptocurrency in order to provide it with at least some kind of legitimacy.

German law does not provide for a general ban on issuing, mining, owning or trading cryptocurrencies. It's the same with securities, assets and utility tokens. However, regulatory requirements for licensing and emissions may apply. This means that there are certain obstacles that can be overcome by complying with the relevant legal requirements.