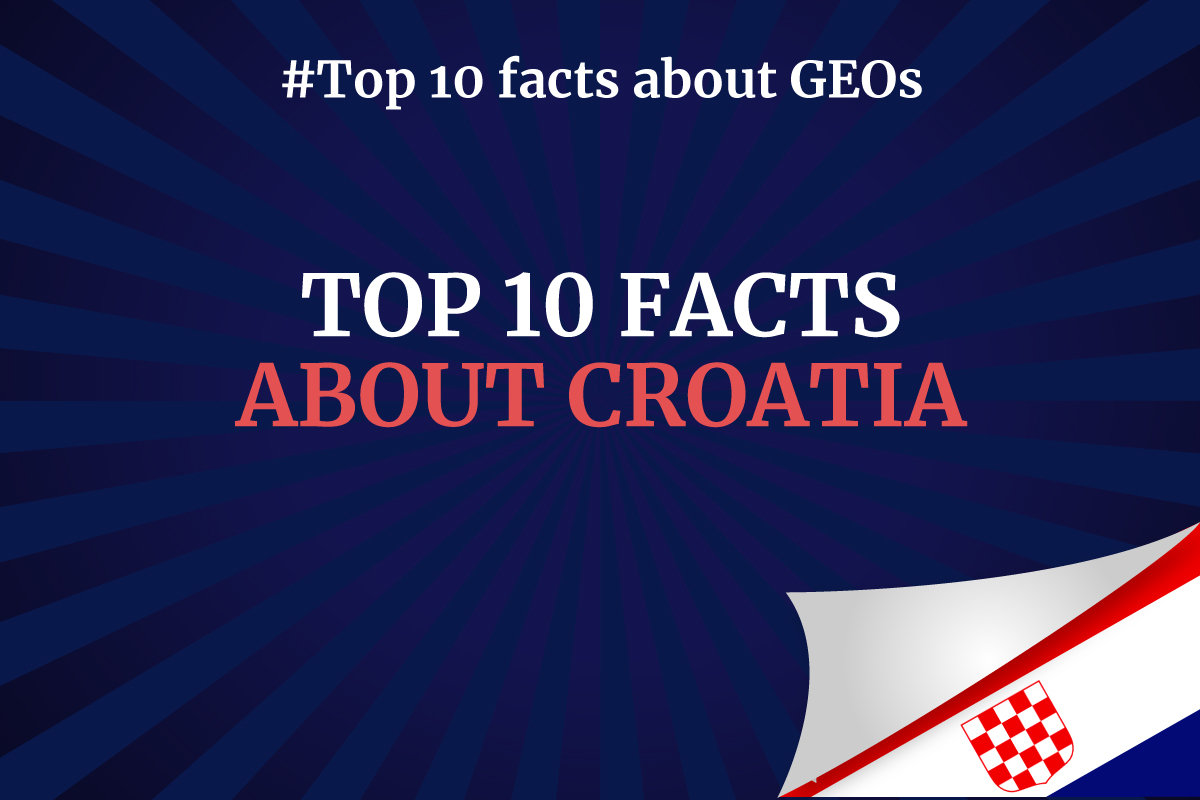 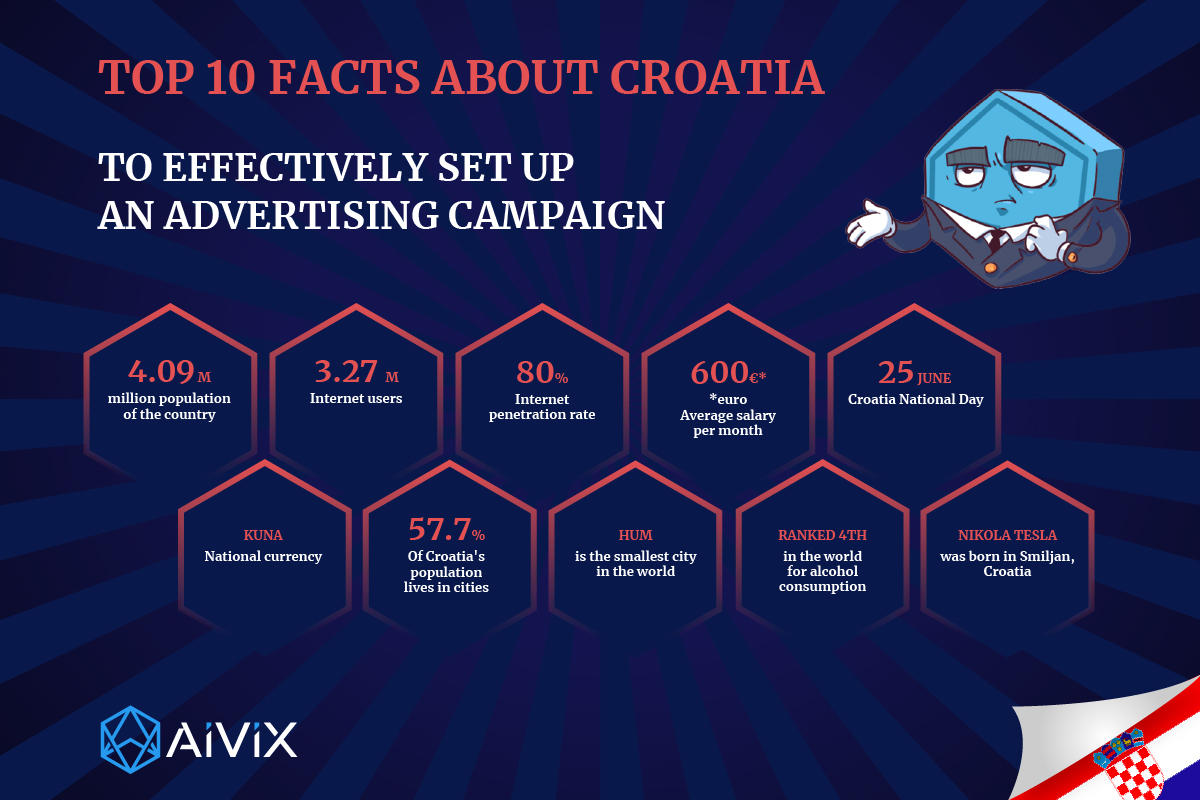 1. Geography and population of Croatia

7. Working days and holidays in Croatia

1. Geography and population of Croatia

Croatia occupies 56,500 km² of the mainland and just under 32,000 km² of the sea. The Adriatic coast, which includes 1185 islands, islets and reefs, of which only 66 are inhabited, is 5740 km long and is famous for its clear waters. The highest peak is Mount Dinara at an altitude of 1831m above sea level. The republic boomerangs from the Pannonian plains of Slavia between the Sava, Drava and Danube rivers, through hilly central Croatia to the Istrian peninsula, then south through Dalmatia along the rugged Adriatic coast. Croatia's geography is diverse: rocky coastline, mountains with dense forests, plains, lakes and hills. In an effort to preserve the environment, Croatia maintains eight national parks. 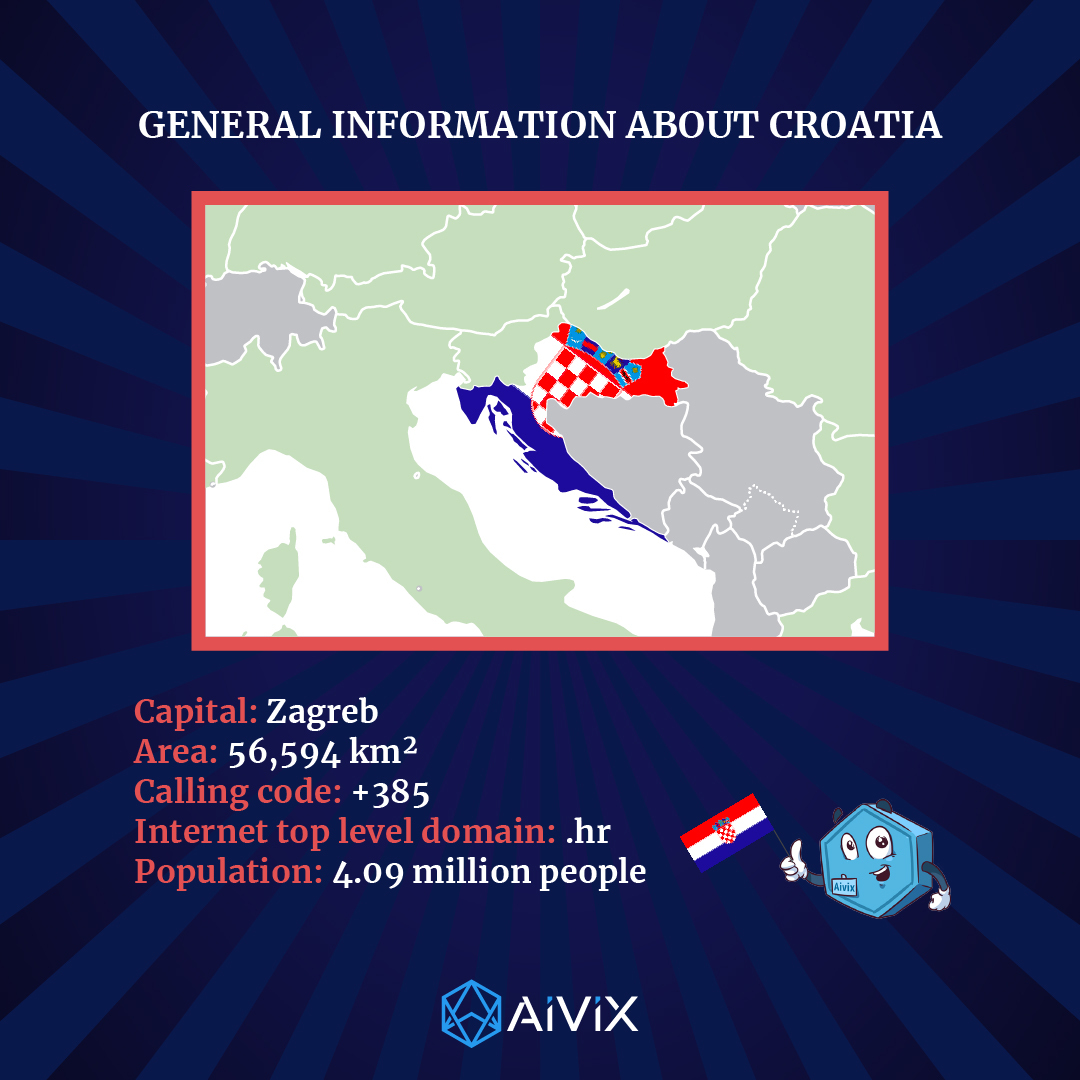 Croatia is going through a demographic crisis and loses people every year. Its fertility rate is only 1.5 children per woman, one of the lowest in the world, and its death rate has exceeded the birth rate since 1991. Natural growth is negative. Croatia's population is projected to decline to 3.1 million by 2050, after peaking at 4.7 million in 1991.

Croatians make up 90.4% of the population. This makes Croatia the most ethnically homogeneous of the 6 countries of the former Yugoslavia. Other groups include Serbs (4.4%), Bosnians, Italians, Germans, Czechs, Romanian and Hungarians. 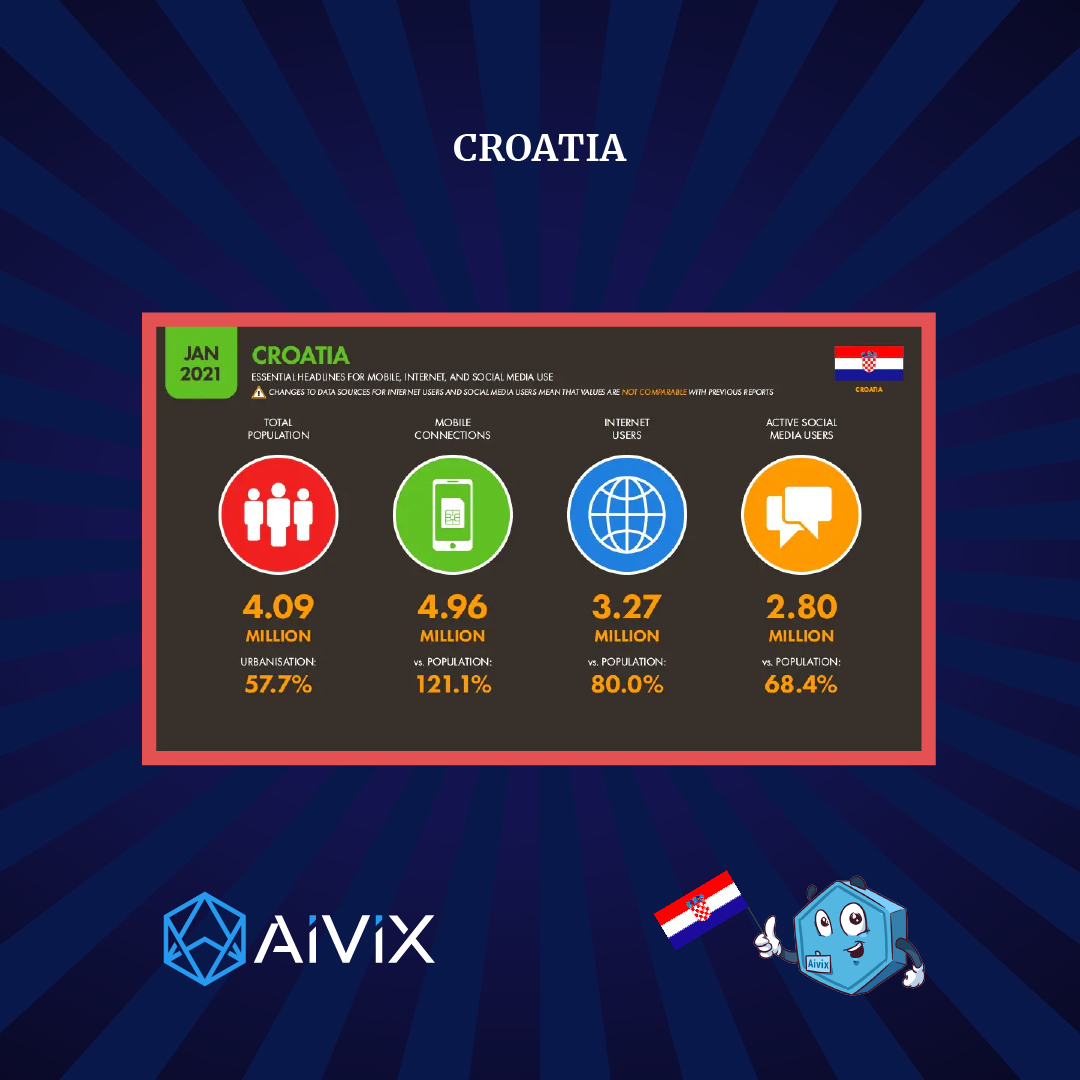 Croatian is primarily a South Slavic language spoken by Croats living in Croatia, Bosnia and Herzegovina, neighboring countries such as Serbia, the Italian region of Molise, and Croatian communities around the world. The Western Stokava dialect is the dialect base of the standard Croatian language. The language also includes two main dialects: Chakavian and Kaikawan. The Croatian alphabet is based on the Latin alphabet, in contrast to the Serbian alphabet which is based on the Cyrillic alphabet. Together with Serbian and Bosnian, they belong to the Central South Slavic diasystem, also known as "Serbo-Croatian". Serbs and Croats understand each other via conversation.

The Croatian currency is the Kuna not the Euro. Which is divisible by 100 limes. When quoted, Kuna is abbreviated to Kn. The word "kuna" means marten, a weasel-like animal whose fur Croats used to pay for goods centuries ago. The word "linden" means a linden tree.

There are different types of connections: dial-up, DSL, satellite, 3G mobile and cable. Broadband is mostly available in Croatian cities, but the countryside is not very well covered yet.

The easiest and most practical way to get the latest information on contract types is through their websites. Of course, you can also go to any store and they will help you. Don't feel obligated to order immediately. 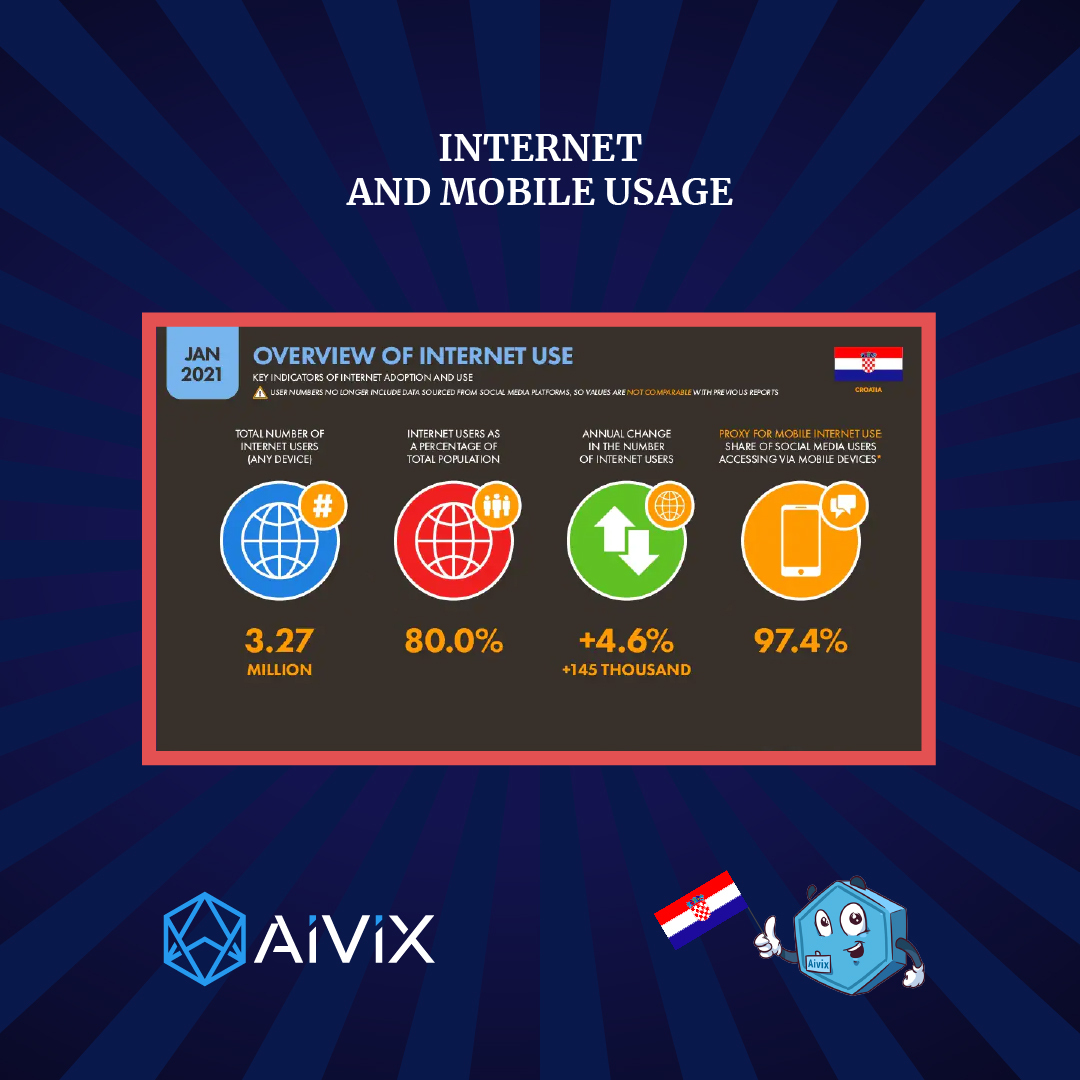 GDP is expected to grow at a steady pace next year, as economic recovery abroad stimulates tourism activity and, in turn, supports the external sector. Domestically, EU funding will support capital spending, while falling unemployment will increase household spending. Outbreaks of COVID-19, especially in light of the country's dependence on tourism, cloud the prospects. Focus Economics experts predict economic growth of 4.6% in 2022, which is unchanged from last month's estimate, and 3.7% in 2023. 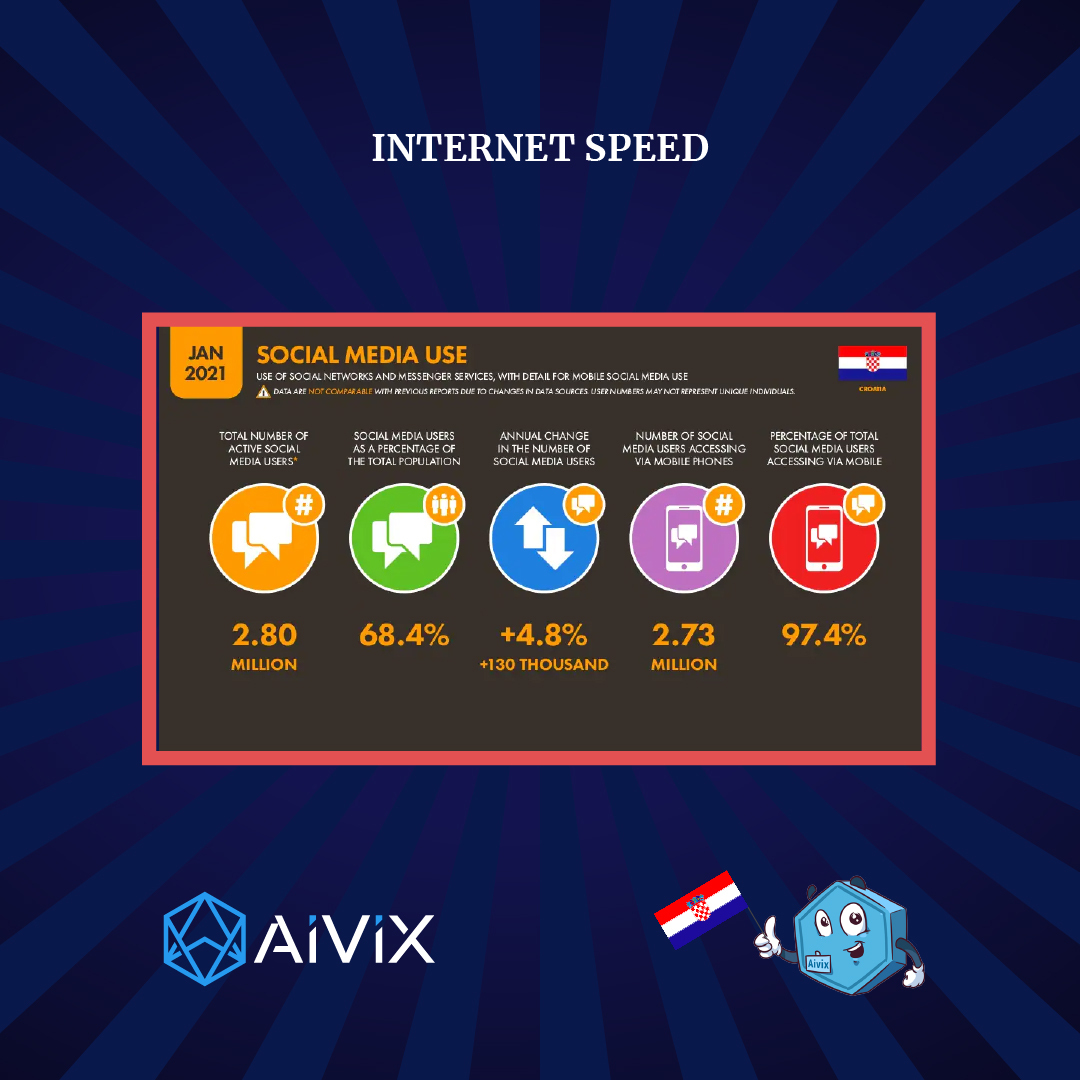 7. Working days and holidays in Croatia

August 15 - Dormition of the Most Holy Theotokos

The vast majority of Croats have a strong cultural identity with Western Europe and distinguish between themselves and their “eastern” neighbors in Bosnia, Montenegro and Serbia. The idea that Croatia is the last stop before the Ottoman/ Orthodox East prevails in all walks of life.

Most of the people employed in the tourism industry speak German, English and Italian, although English is the most spoken language among young people.

Family is very important to Croats and the ties with extended families are strong and cherished.

Most families own their own homes, purchased in the post-communist years, when previously state-owned homes were sold to tenants for little money. These properties are often inherited from grandparents and other relatives.

Relaxing in cafes and bars is an important part of life here. Most likely you are wondering how everything works here when so many people are resting and not working. But perhaps it’s this coffee that makes them work twice as fast when they’re back in the office.

According to the latest census, 86.3% of the population consider themselves Catholics, 4.4% Orthodox (this exactly corresponds to the percentage of Serbs), 4% "other and undeclared", 3.8% atheists and 1.5% Muslims. 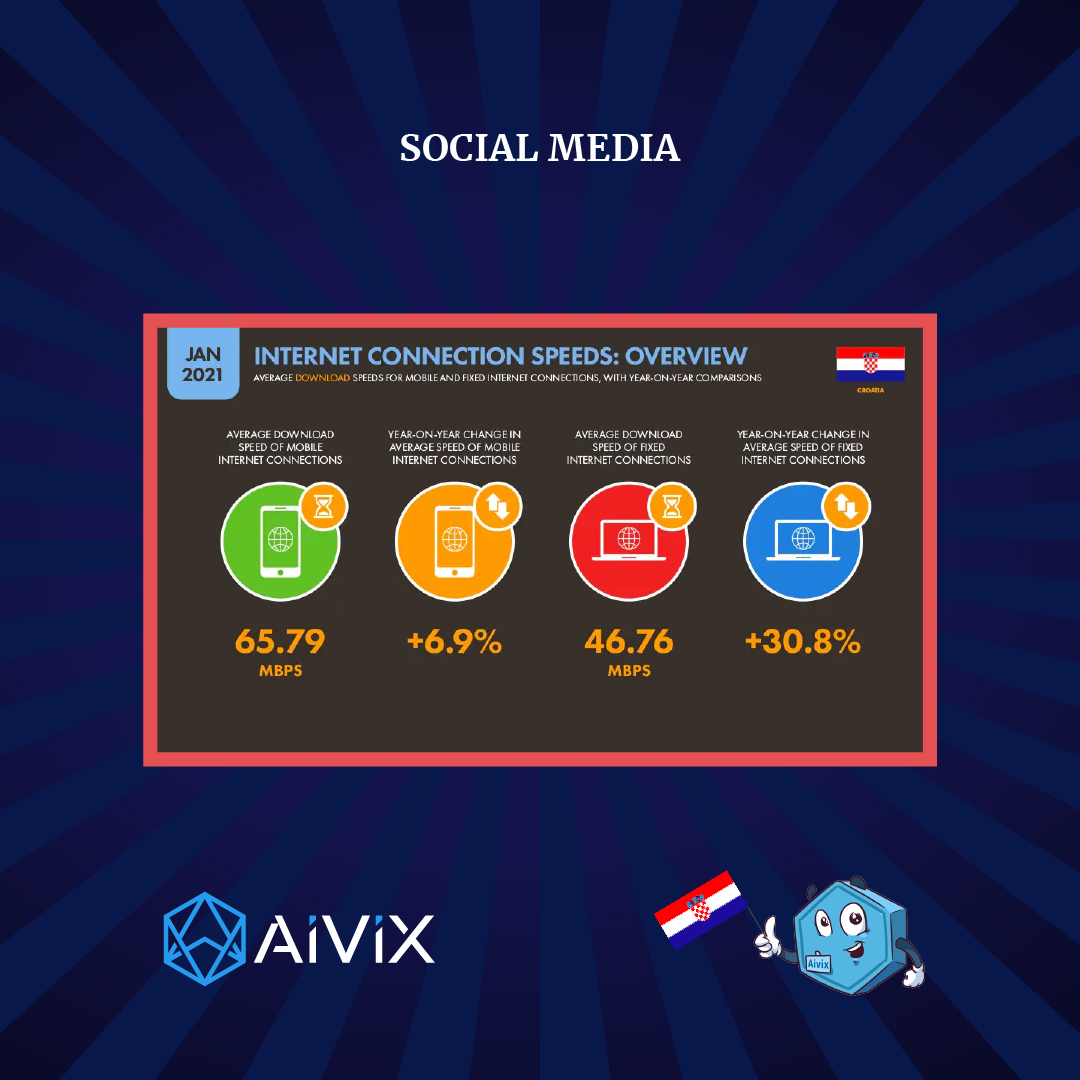 While the number of publications is growing, television (which reaches 90% of the market) is the most important advertising medium in Croatia. Outdoor advertising is also growing. When allocated, about 60% of ad spend goes to television, 15% to newspapers, 10% to magazines and 5% to outdoor billboards. Radio is generating growing interest, currently accounting for about 10% of advertising spending.

• In January 2021, the number of social media users in Croatia was 68.4% of the total population.

The Croatian Financial Stability Board warned that cryptocurrency holders should be aware of the possible tax implications of their cryptocurrency transactions:

• Cryptocurrency investors should take into account that cryptocurrency trading is considered a “financial transaction” in Croatia.

• Income from the sale of cryptocurrencies is subject to personal income tax based on capital gains. Croatian residents are taxed at a 12% rate, while residents of Zagreb are taxed at an 18% rate.

• Cryptocurrency holders must document their transactions in accordance with the consistent FIFO method.

Currently, a cryptocurrency license is not issued in Croatia, and there are no legislative acts regulating the work of various crypto projects. Given the opinion of the Croatian National Bank and the Central Revenue Service that bitcoin is not a financial equivalent, but just a tool, the government is slowly coordinating measures.

It is worth noting that parliamentarians positively assess the course of cloud assets in the local business environment, but licensing the exchange of cryptocurrency in Croatia, at the moment, is still a matter of the future. 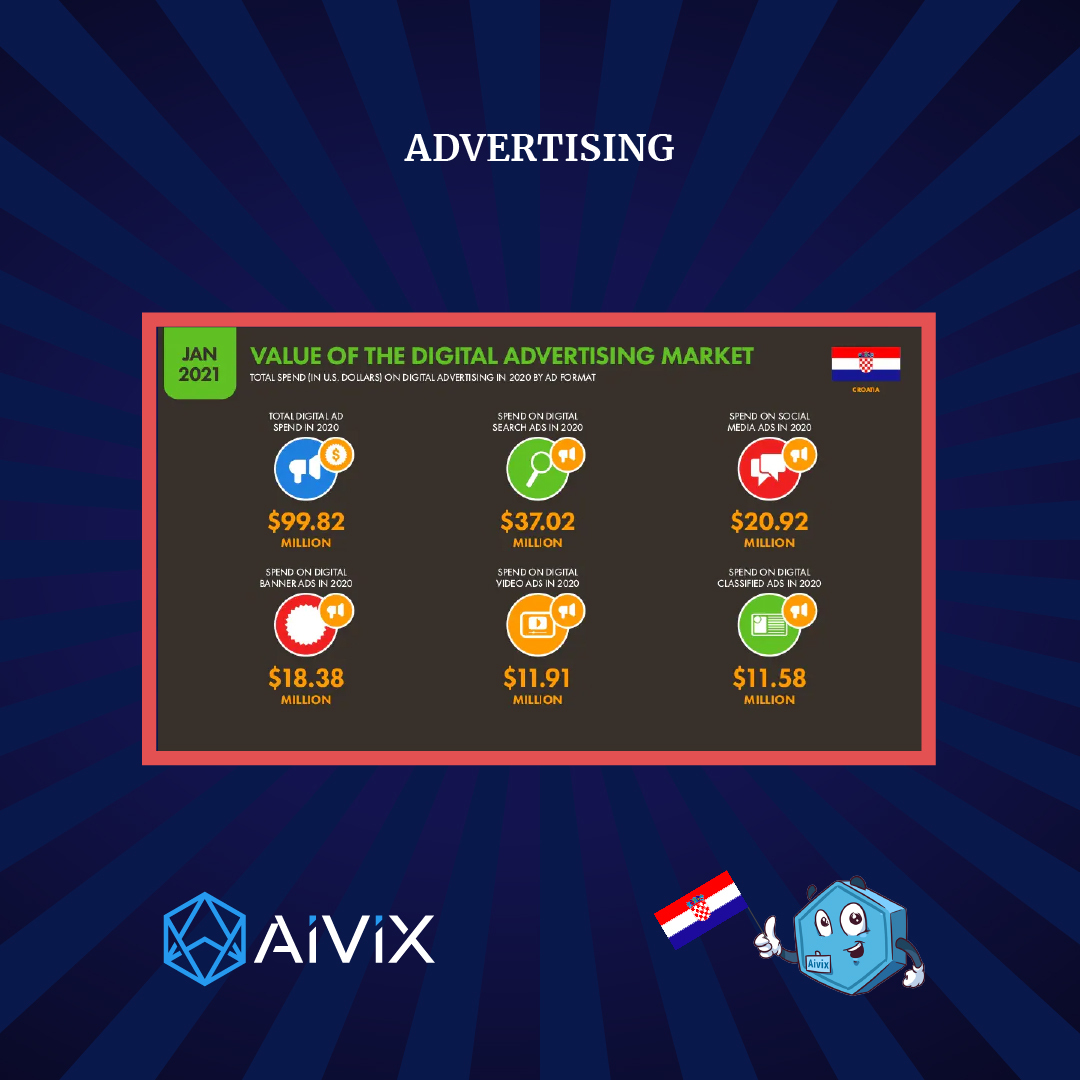