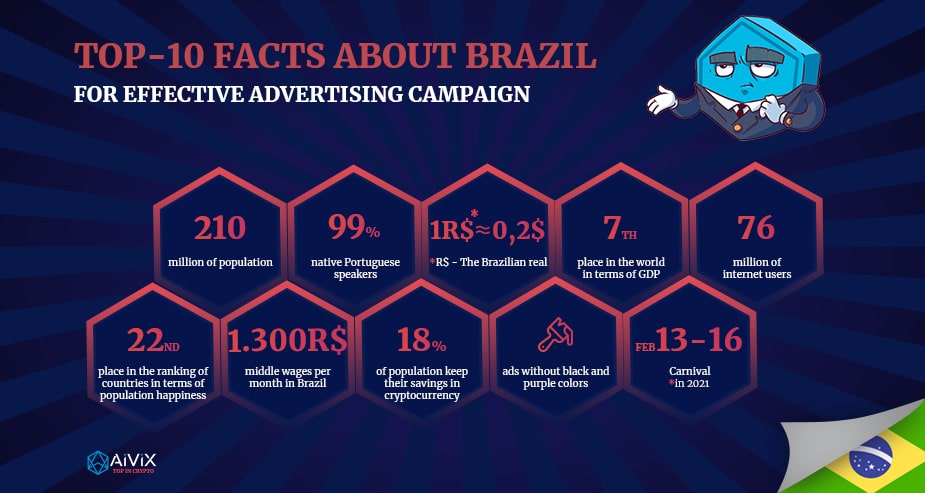 1. GEOGRAPHY AND POPULATION OF BRAZIL

Brasilia is the capital of Brazil since 1960, but since 1763 till 1960 the capital was Rio de Janeiro.
Despite the transfer of the capital to Brasilia, Rio de Janeiro remains the focus of the country's intellectual life. The cultural capital of Brazil, Rio de Janeiro is a city of elite and creative bohemians. The richest and most famous people live in areas of the most prestigious beaches of the city: Ipanema, Copacabana, Botafogu, Leblon.
The territory of Brazil is located in 4 time zones:
UTC (GMT) − 2: Pernambuco (insular), other islands.
UTC (GMT) − 3: Brasilia, Rio de Janeiro, Sao Paulo, Rio Grande do Sul, Santa Catarina, Parana, Minas Gerais, Espiritu Santo, Goias, Bahia, Sergipe, Alagoas, Pernambuco, Paraiba, Rio Grande do Norte, Ceara, Piaui, Maranhao, Para (East), Amapa.
UTC (GMT) − 4: Mato Grosso, Mato Grosso do Sul, Rondonia, Para (West), Amazonas, Roraima.
UTC (GMT) − 5: Acri, Amazonas (Southwest).
Brazil is the largest country in South America in terms of area and population. Occupies the eastern and central part of the mainland. The area of Brazil - 8.55 thousand km², occupies 5.7% of the entire land area of the world. Brazil is the 5th largest country in the world (after Russia, Canada, China and the United States of America).
As the country is large the population is large as well. Brazil has 17 million-plus cities. The country's population is estimated at 210.2 million for 2019. For comparison, another large South American country Argentina is home to 44.9 million people. And for example, in a populous European country as France - 68.85 million. 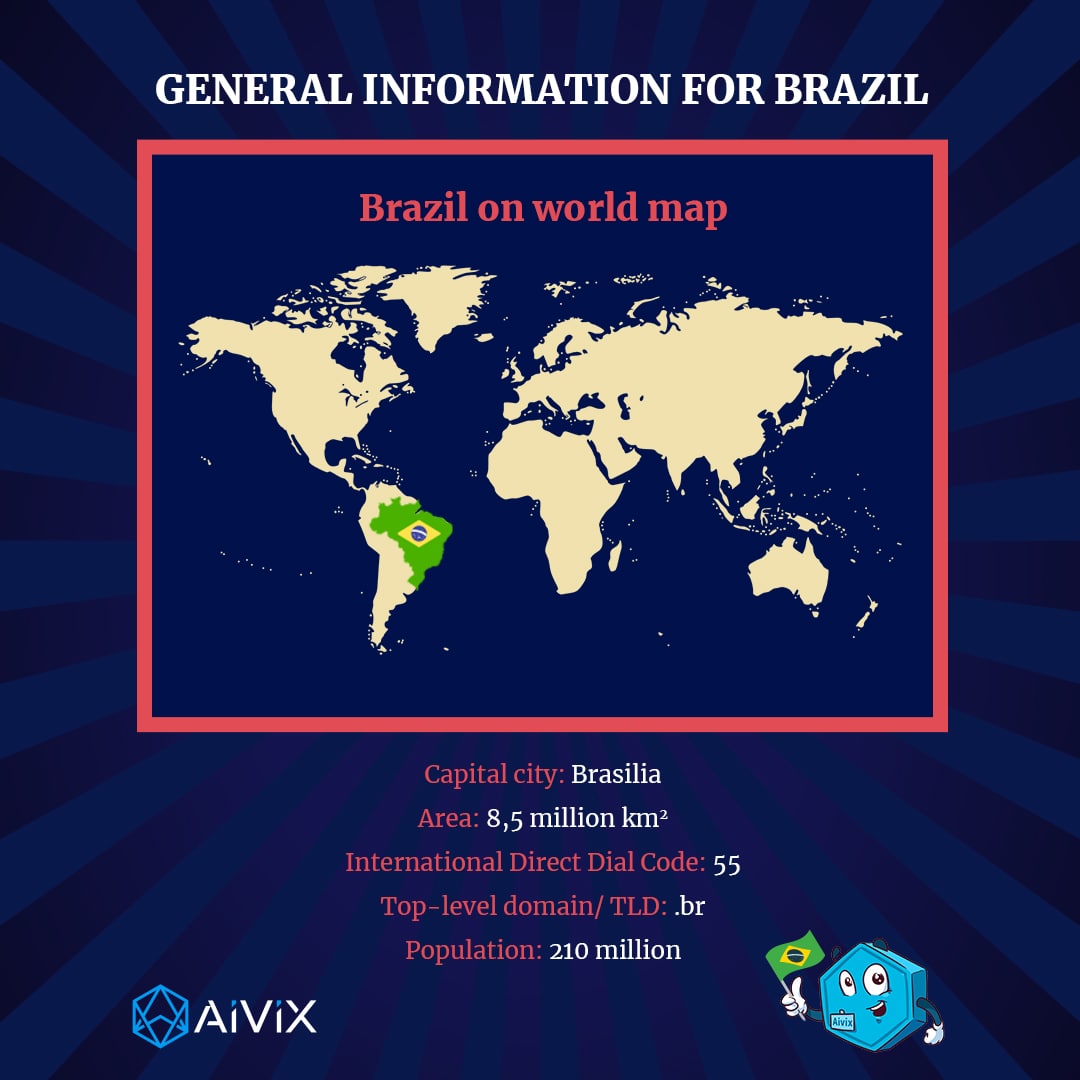 The Portuguese language has the status of the state language throughout the country. According to statistics, 99% of the country's population speaks it. Most of the citizens are Brazilians, a nation that was formed by the mixing of three main races. The reason for this “the youth of the race” is the high birth rate and short life expectancy. On average, a Brazilian lives up to 68 years, while women live longer than men by about 8 years.

Able-bodied citizens of 15–64 years old occupy 68% of the Brazilian population, people over 50 years old here only 10%.

Brazilian sites use the .br country code as a top-level domain, which is overseen by the Brazilian Internet Steering Committee.
The most popular web portals in Brazil are Globo.com, UOL, iG - internet Generation, and brousers are Google and Yahoo.
The most popular social network is Facebook, and the online messenger MSN Messenger has the largest user base in Brazil.
Due to the growing popularity of virtual communications, Newsweek magazine called Brazil "a nation of gossips." Therefore, Brazil ranks 5th in the world in terms of the number of Internet users - 76 million.

- Brazil is the 7th in the world for GDP, has a fairly high level of scientific and technological development and well-equipped armed forces.
- Brazil is a member of a number of international economic organizations: it is a member of the WTO, MERCOSUR, UNASUR, G8 +5, G20 and the Kern Group, and also plays an active role in the work of informal international BRICS group and the IBAC Dialogue Forum (India, Brazil, South Africa).
- Currently, in accordance with the UN classification, Brazil is classified as a "newly industrialized country". It is also classified as an emerging market country.
- Brazil is a leader in the development of science and technology in South America. Brazil rightfully occupies a leading position in the world for the development of technologies for the production of biofuels, agricultural research, technologies for deep-sea oil production, as well as remote sensing of the Earth.

7. WORKING DAYS AND HOLIDAYS IN BRAZIL

Brazil is a very bright and colorful country, living in a constant "carnival" rhythm. The Brazilians are extremely friendly people, therfore the Brazilian holidays are always fun and noisy, with songs and dances.
The Brazilian Carnival is a great event in the life of the entire nation. The opening of the holiday is always scheduled for Saturday, exactly 7 weeks before the celebration of Catholic Easter. At 19:00 on Saturday, the mayor of Rio de Janeiro relinquishes his powers and transfers the burden of power for 4 whole days to the King of the Carnival. In 2021, the carnival will take place on February 13-16. Officially, the carnival lasts about a week.
The working day in Brazil starts from 8.00 and does not exceed 8 hours a day. The maximum working time per week is 44 hours. In this case, no more than 2 overtime hours per day are allowed.
Typically, the work week in Brazil starts on Monday and ends on Saturday. In this case, the weekly uninterrupted rest must be at least 24 hours.

Bright and eternally sunny Brazil takes 22nd place in the ranking of countries in terms of population happiness. With such a high indicator, the local people like to arrange additional reasons for joy.
Research shows that the purchasing power of the Brazilian population has increased by about 30% in recent years.
The Brazilian mentality is based on optimism, a positive attitude to life and emerging problems. You can see many happy people on the streets who are truly enjoy life and express their emotions at ease. People in Brazil easily make contact and make new acquaintances.
Thanks to the Brazilian mentality - life looks like a continuous celebration and carnival.
Brazilians love their flag very much, each has more than one. Also popular are blankets, swimwear, T-shirts all with a flag.

Advertising in Brazil is really high quality, skillfully executed, juicy, colorful, full of life, like the carnival in Rio de Janeiro. It is no coincidence that Brazilian creative agencies regularly take the first places in international advertising festivals.

In most cases advertising talk about characteristics, lure with prices, but in Brazil everything is different: Brazilians do not care about these characteristics, here the appearance, style, effect, image is more important.
Boring and memorable video simply has no right to exist in this country. Advertising in Brazil is interesting, creative, with humor, it’s catchy and stays in memory.

What is important to remember if you are doing advertising in Brazil: avoid purple and black - these are mourning colors that are not accepted in advertising. It is also better to use images of people in groups: Brazilians are a very socially active nation, and family values are important.
Research has shown that colored advertising and marketing materials increase sales by 80%, and using bright shades in a corporate style increases brand awareness by 80%.
Color is one of the most important components of business. It can be an effective tool for helping to convey important ideas to the audience, to draw attention to the product. It can play against the business if used incorrectly or inappropriately. 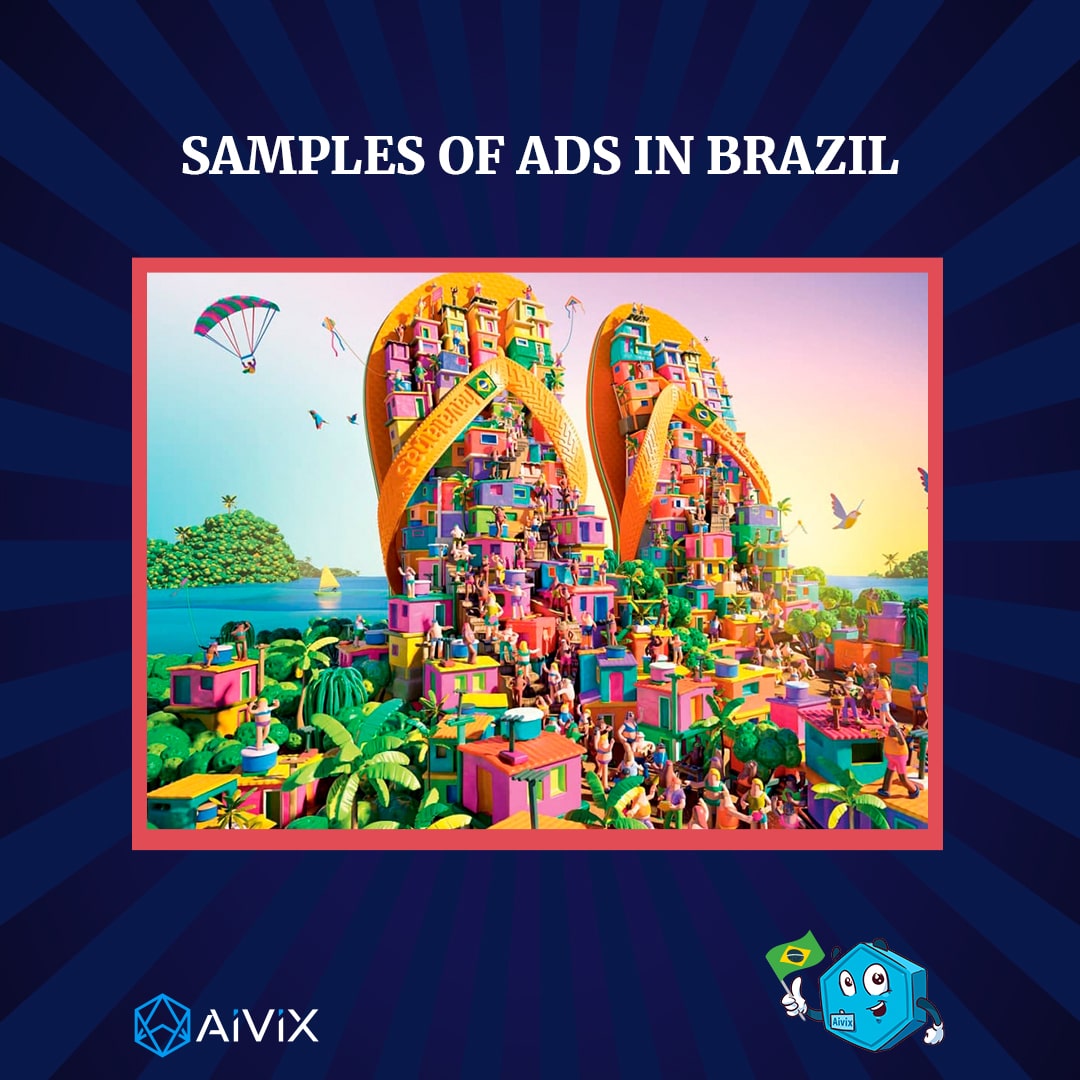 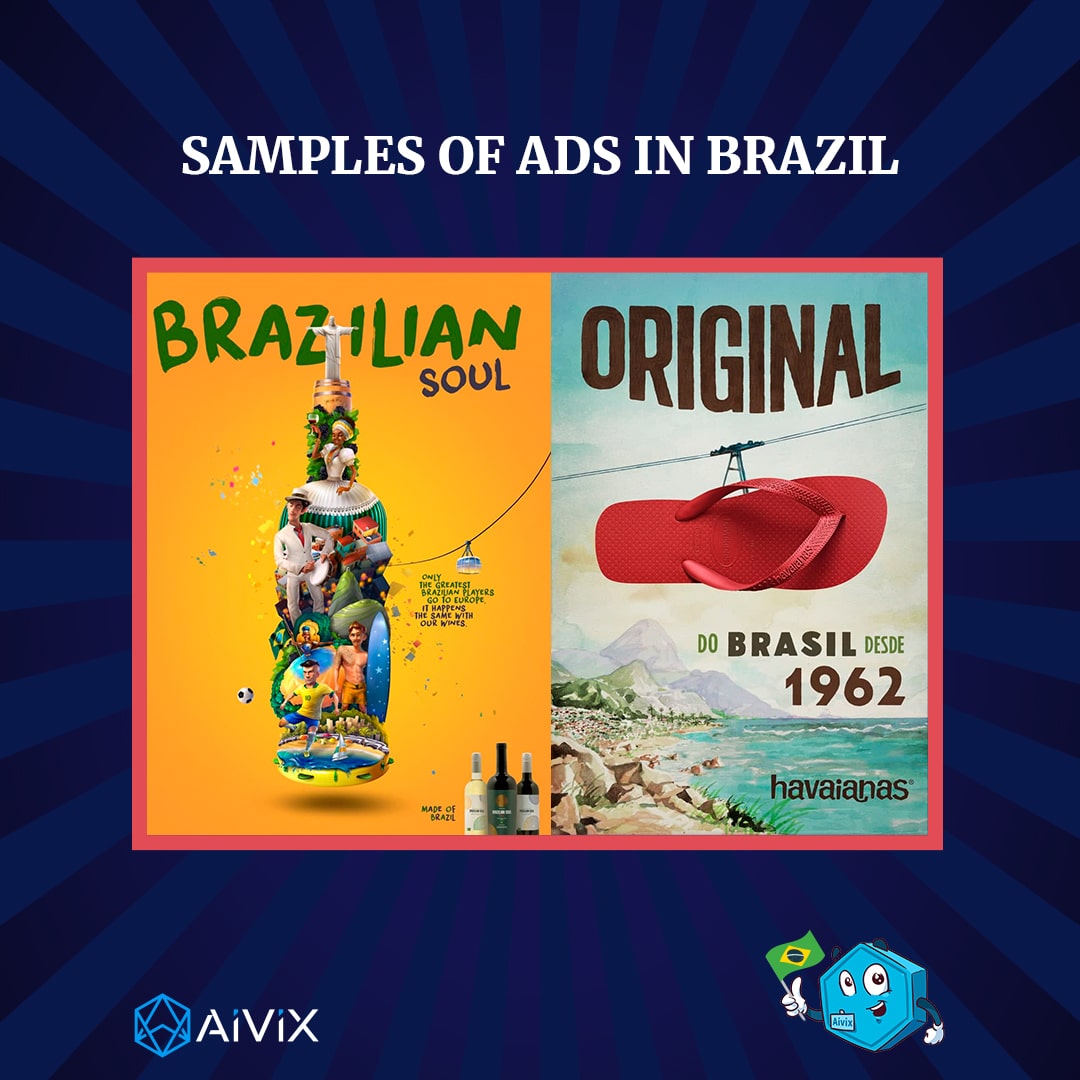 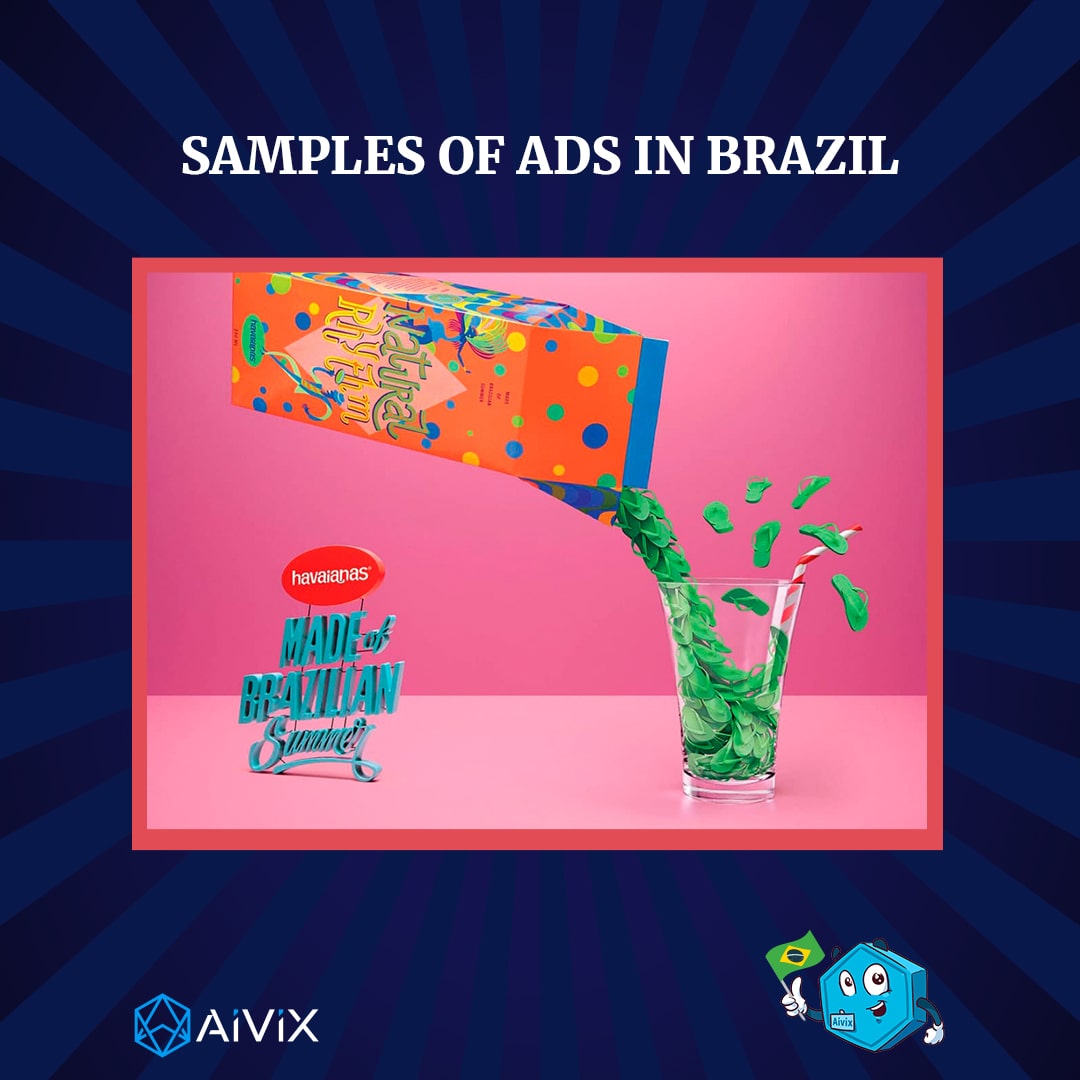 Today, the popularity of cryptocurrency in Brazil is growing, this is facilitated by the economic crisis and the maximum inflation rate over the past 15 years. Therefore, Brazil is joining dozens of crypto countries around the world and is going to start regulating cryptocurrencies. 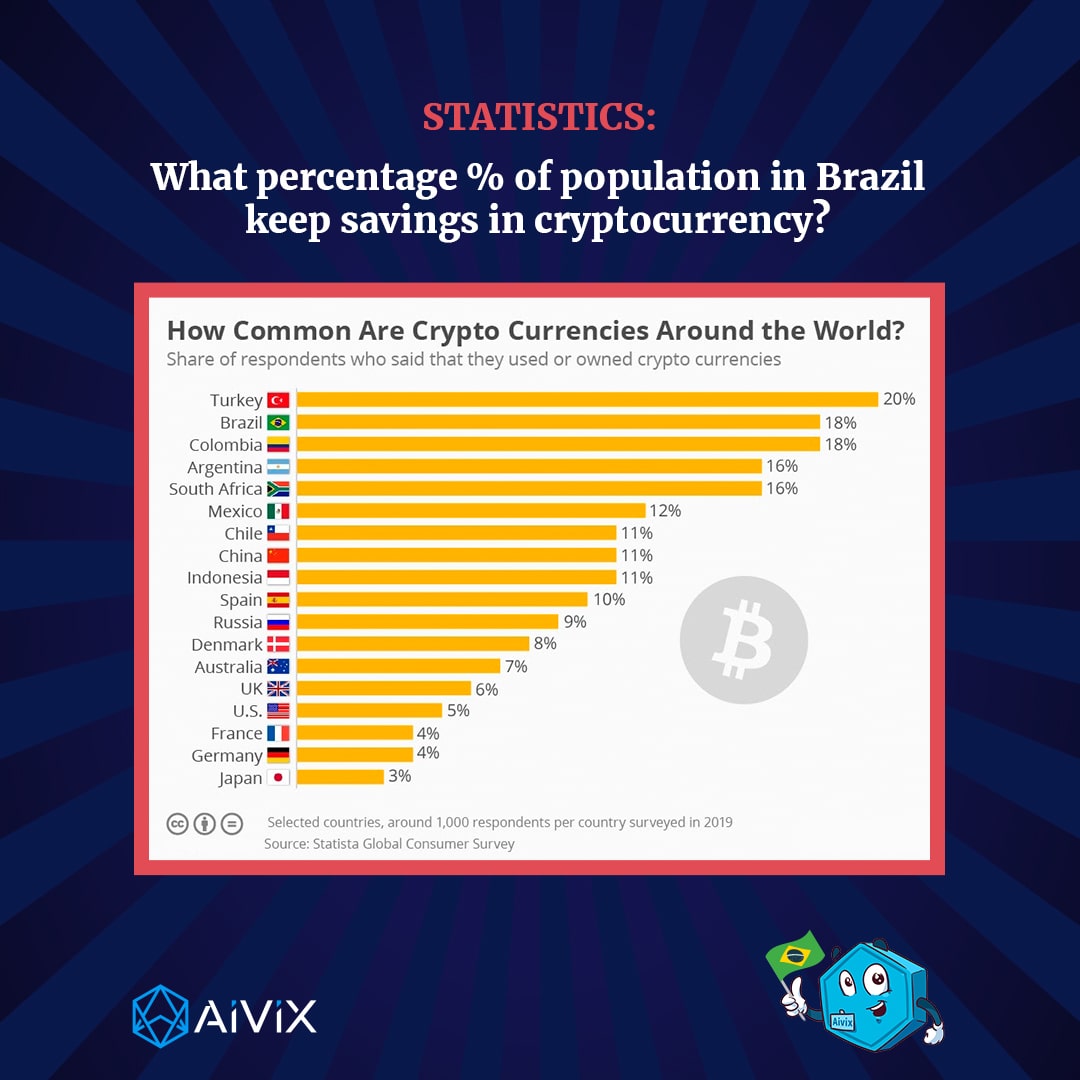