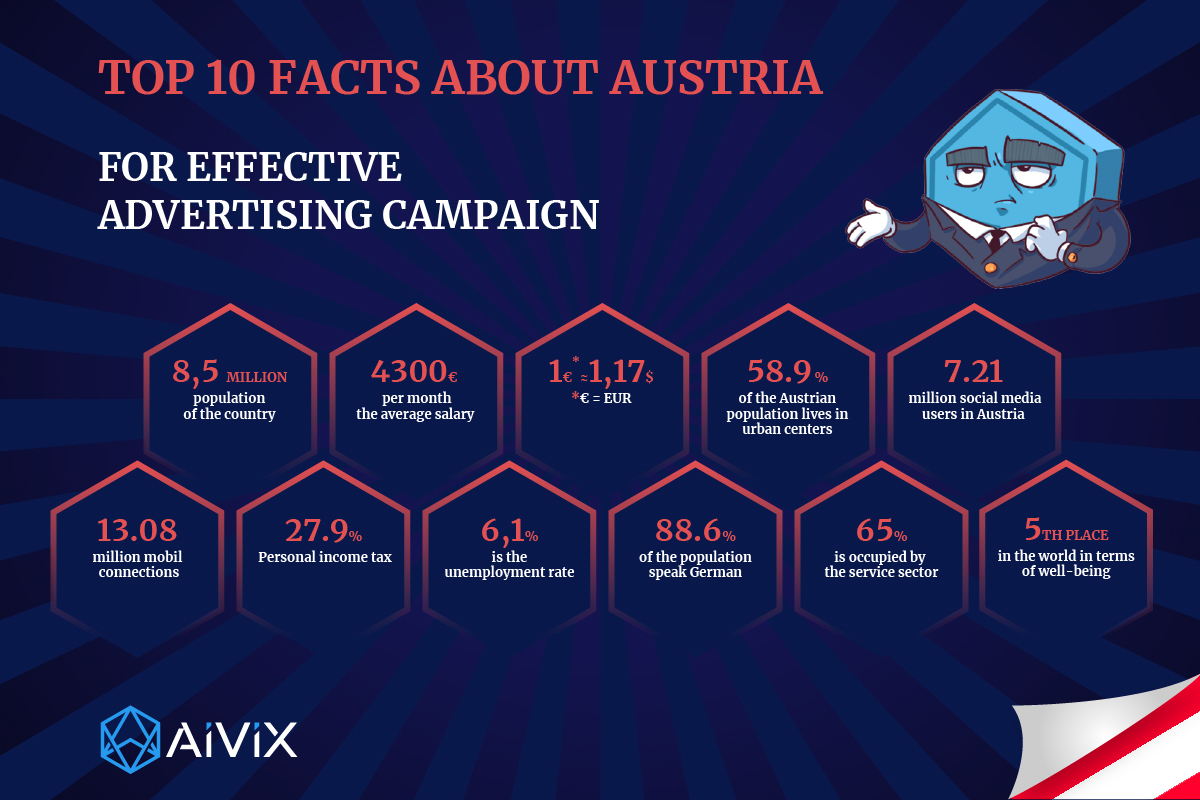 1. Geography and population of Austria

7. Working days and holidays in Austria

1. Geography and population of Austria

Austria's official name is the Republic of Austria (Republik Österreich) - a state in Central Europe. The population is 8.46 million people, the territory is 83,879 km². It occupies the 94th place in the world in terms of population and 112th in terms of territory.

Austria has 1 time zone, so all cities in the country have the same time. 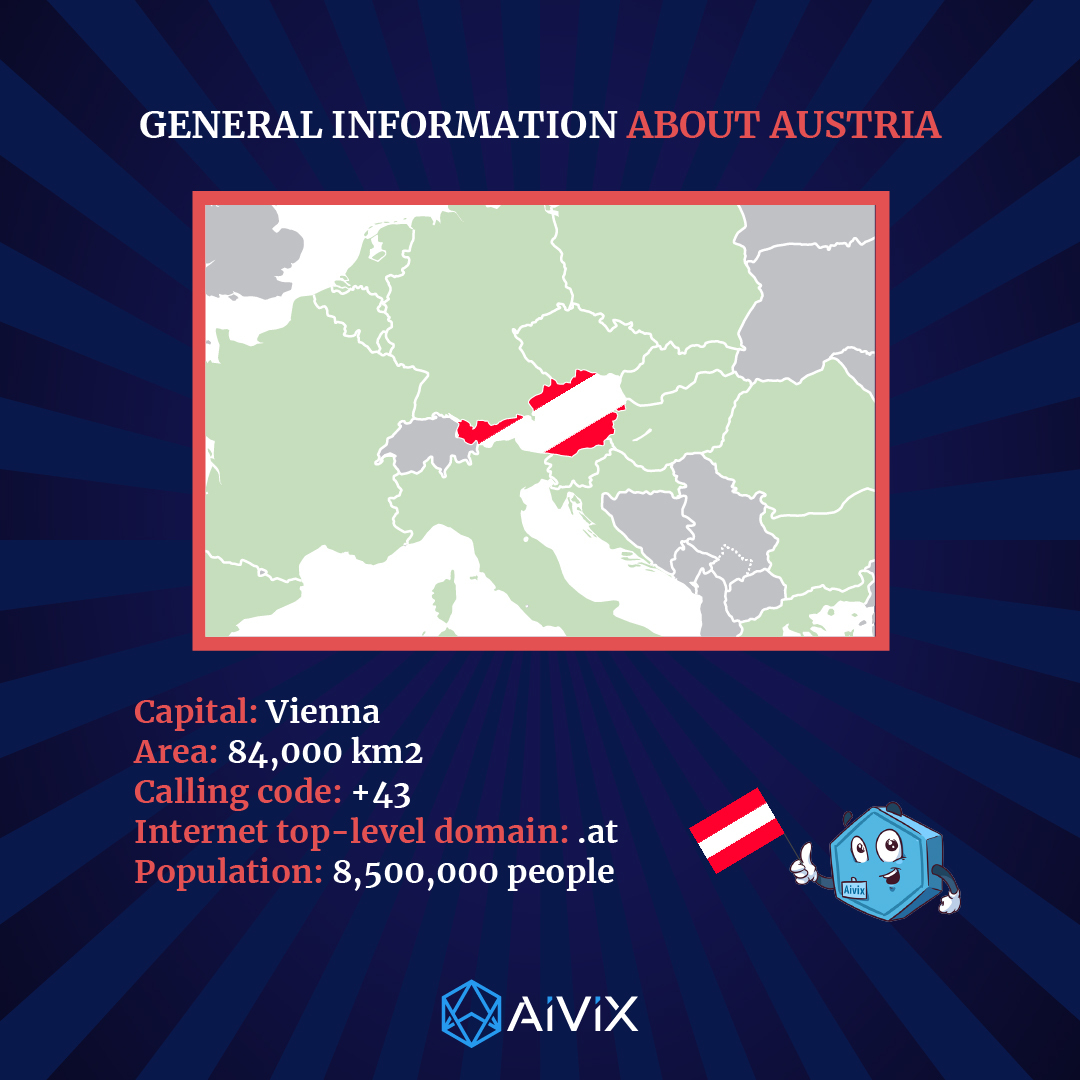 2. The official language of Austria

According to the census, the largest ethnic group - German-speaking Austrians - make up 88.6% of the country's population. According to The World Factbook, the language composition of the Austrian population as of 2001: German (official state language) - 88.6%, Turkish - 2.3%, Serbian - 2.2%, Croatian (official in Burgenland) - 1. 6%, others (including Slovenian, official in southern Carinthia, and Hungarian, official in Burgenland) - 5.3%.

- The number of social media users in Austria was equivalent to 79.9% of the total population in January 2021.

- The number of mobile connections in Austria in January 2021 was equivalent to 145.0% of the total population. 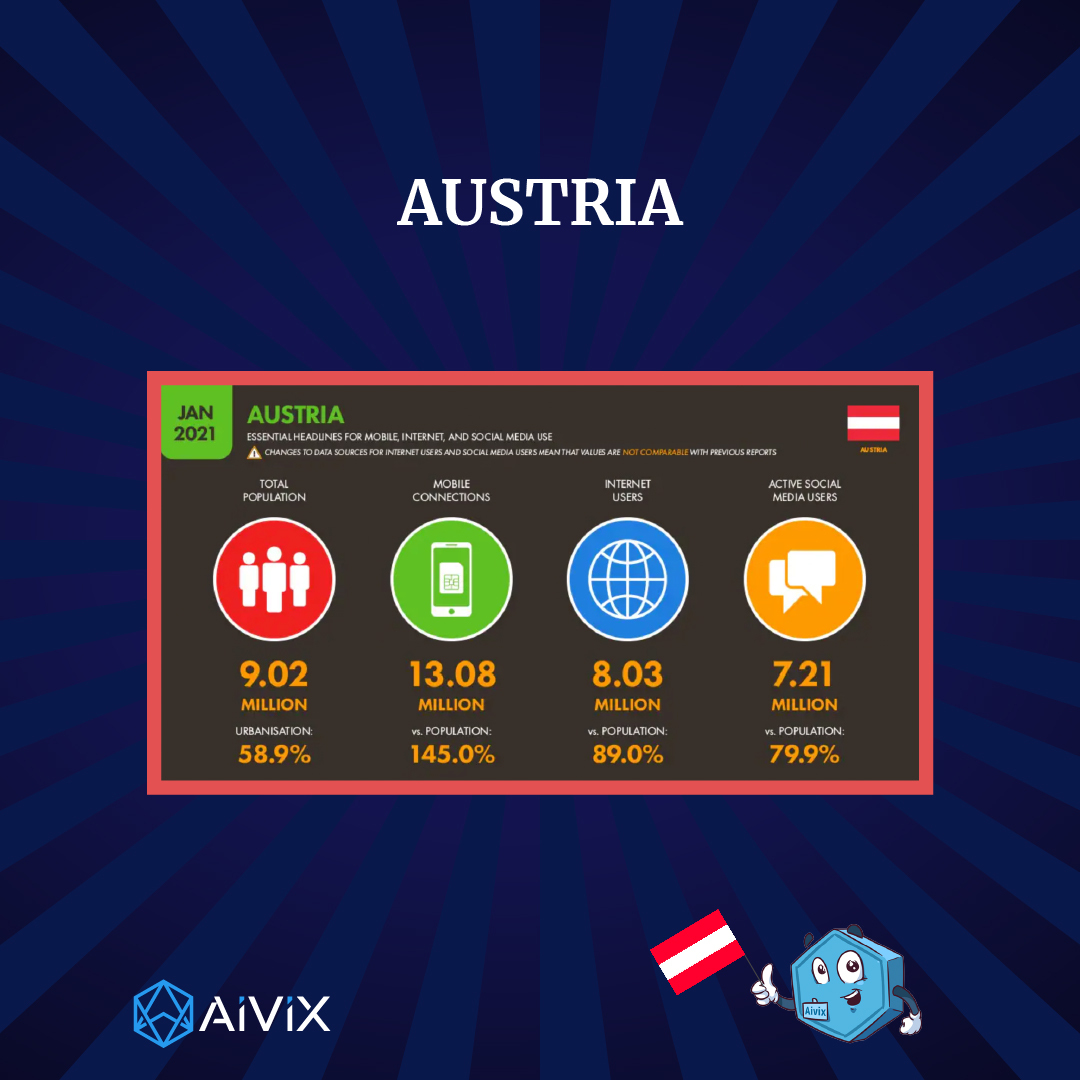 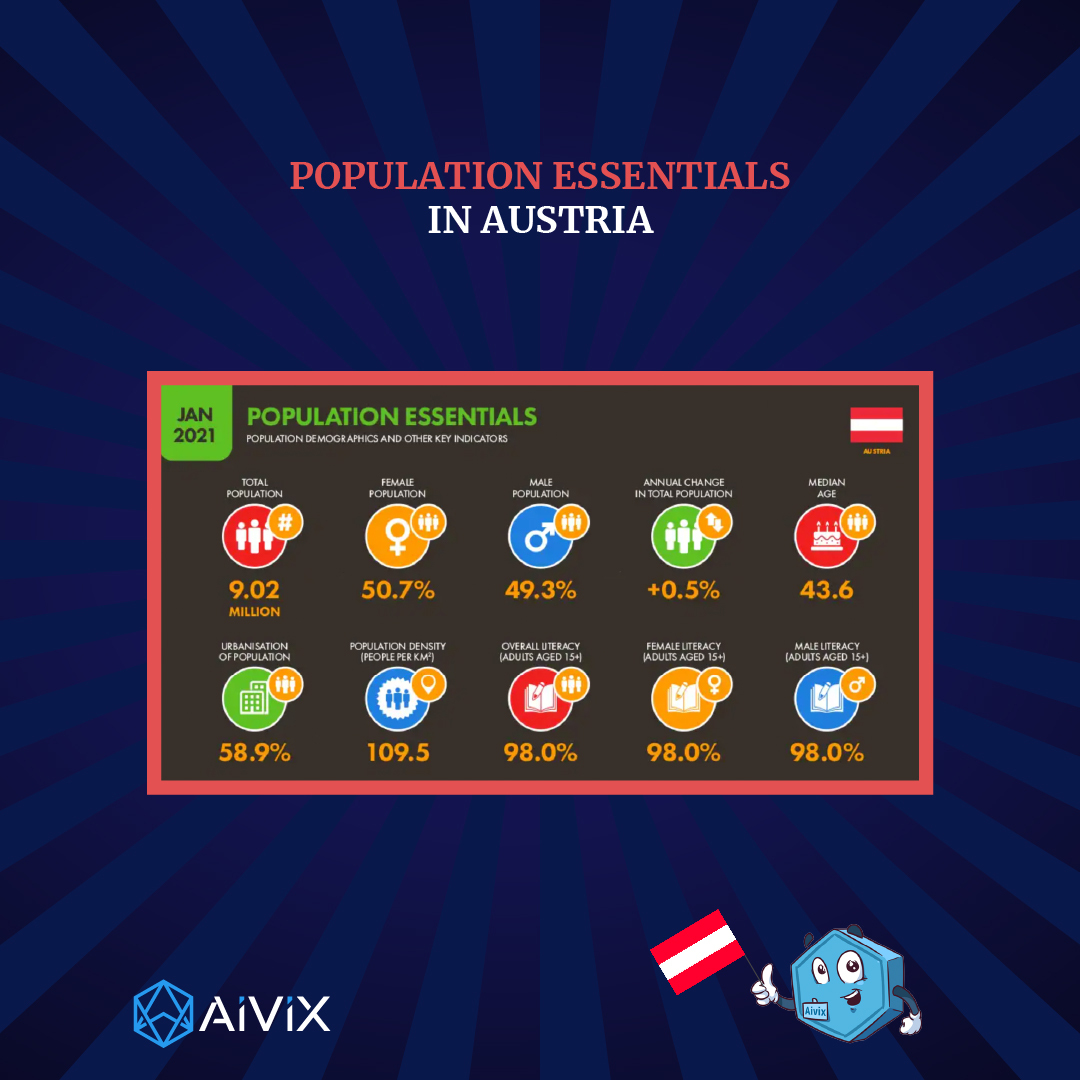 Austria is a highly developed post-industrial state, one of the most developed countries in Europe. It is part of the European Union (since 1995). Almost all sectors of the economy are developed in the country, from tourism (about 15 million people visit the country annually) to aerospace technologies.

The economy of this state dates back to the 10th century, when the preserved monasteries gave a start to the development of viticulture, animal husbandry and horticulture. In general, the establishment as a successful state for a long time was based on its own production. But everything changed during the Crusades, when the area of the merchant began to expand. And by 1146, when Margrave Henry II settled here, Vienna acquired the status of one of the richest cities.

An important role was played by the geographical position, thanks to the river routes, relations with the Czech Republic, Italy, Hungary and even Russia were established. And since the XII century Germany also joined to buy from Austria-Hungary. Local wine, handicrafts and salt from the Alps were especially appreciated.

In general, even today, the stability of the republic is built on two pillars - world trade and tourism business, again, thanks to its favorable location. Today, the quality of goods is traditionally high, especially for wine, dairy products and confectionery. Total exports for the year replenish the budget by one hundred and eight billion euros. In terms of tourism, this industry also makes a huge contribution to the economic structure of Austria - about $12 billion.

It's not a secret that this is one of the richest states in the world. It invariably occupies a leading position in the TOP 10 most comfortable places to live. But locals do not pursue wealth, ignoring debt and environmental pollution. They try to achieve well-being through rational resource-saving nature management.

To understand how stable the Alpine Rep. just look at these numbers:

- GDP per capita is just over twenty-seven thousand euros.

At the same time, the state has not only a high-income indicator, but also rather high taxes, this is what fills the treasury for the year (the amount is announced in national currency, all values mean billions):

- Deductions from refining of petroleum products - 4,550%

And here are a couple more interesting facts:

In 1873-1881 during the decline of Austria, it was possible to make an industrial upsurge. Tourism accounts for almost 10% of GDP. All this is due to the fact that only here guests can get everything at once - historical and memorable places, a kind of culture, the best centers for mountaineering and skiing, rich cuisine, quality products, nature reserves.

Foreign trade is one of the strongest aspects of the economy, but few people know that 85% of exports go to the territory of the European Union, while the main partner is the Germans (about 36.1% of its total turnover).

- For the fight against the pandemic and the elimination of the consequences of the crisis, 20,000,000 euros were allocated from the budget.

In terms of its development, the Alpine Republic is ahead of many members of the European Union, including Sweden, England and the Federal Republic of Germany.

Why do so many professionals immigrate to work in Austria? This country has a highly developed economy, favorable conditions for business and decent wages.

The average annual salary of employees in Austria is currently €52,000 gross per year. Average salary in Austria - €4300 per month. This is 8,000 euros more than last year.

With the increase in professional experience, salaries also increase. Age groups over 60 years of age earn the best - €77,000 and those with more than 25 years of work experience - €66,000.

Average salary per year by region of Austria/ gross per year:

7. Working days and holidays in Austria

The following days are national holidays. In addition to them, there are also regional (land) holidays, but they, as a rule, concern only students and civil servants.

Saturday is a day off for students, employees of enterprises and civil servants. Stores work on a shorter schedule usually until 17:00 or 18:00.

Sunday is a day off. Only tourist sites are open: museums, souvenir shops, cafes and restaurants (not all).

Banks are closed on Saturday, Sunday and bank holidays. Currency exchange is only possible on weekdays.

An overview of all public holidays in Austria:

June, 3 - Feast of the Body and Blood of Christ

August, 15 - Assumption of the Virgin Mary

Austria is a country of order, standards, clear guidelines and meticulous attitude to any business. The locals are so pleased to feel that they did everything right and on time, which gives rise to both a large number of positive moments and several peculiarities.

- 90% of Austrians communicate in German, which is the official language in the country. However, mention should be made of Slovene, Croatian and Hungarian, which are official in Carinthia and Burgenland. Austrian youth are actively studying French and English.

- Opinion polls show that most Austrians prefer to spend their leisure time playing sports and other outdoor activities.

- Austria is a very hardworking country. The unemployment rate here is at an all-time low. Most of the population works 9 hours a day and stay over hours at work.

- Austrians are passionate about healthy eating. Only 20% of Austrian women have problems with being overweight. This is the lowest rate in all of Europe.

The development of the economy and private companies requires the use of advertising in the media, on external media and on the Internet. The inhabitants of Austria have a high purchasing power. For promotion, it is important to take into account that, despite the high return on investment, the price of traffic assumes fierce competition.

As in other European countries, in Austria the search browser Google (64%) is in the lead, although quite a lot of users choose Bing (23%), Yahoo (13%). The Yahoo Newsfeed is popular with Austrians and allows for many banner ads. According to the results of the official census, 80% of the country's population is made up of Germans and Austrians, 20% is accounted for by other ethnic groups, with a predominance of Serbs, Turks, Romanians and Roma.

Due to such a variety of language groups, the promotion can be launched with targeting in Turkish, Serbian and Romanian, although the main language should still be German. However, it is very different from the German version, recalling the dialect of Bavaria and German in Switzerland.

For high traffic of a site focused on Austria, you need to purchase a domain in the AT zone. It allows you to register commercial, travel, entertainment, information sites.

It is necessary to fill the site with up-to-date information, providing constant technical support. SEO promotion in Austria should take into account the nuances of Google ranking:

- work with reputation, focus on reviews of real customers;

- clear definition of target audience for its conversion into regular customers;

- the amount of conversion depends on the convenience of usability and ease of ordering;

- elaboration of the semantic core for your niche and getting the maximum number of customers. 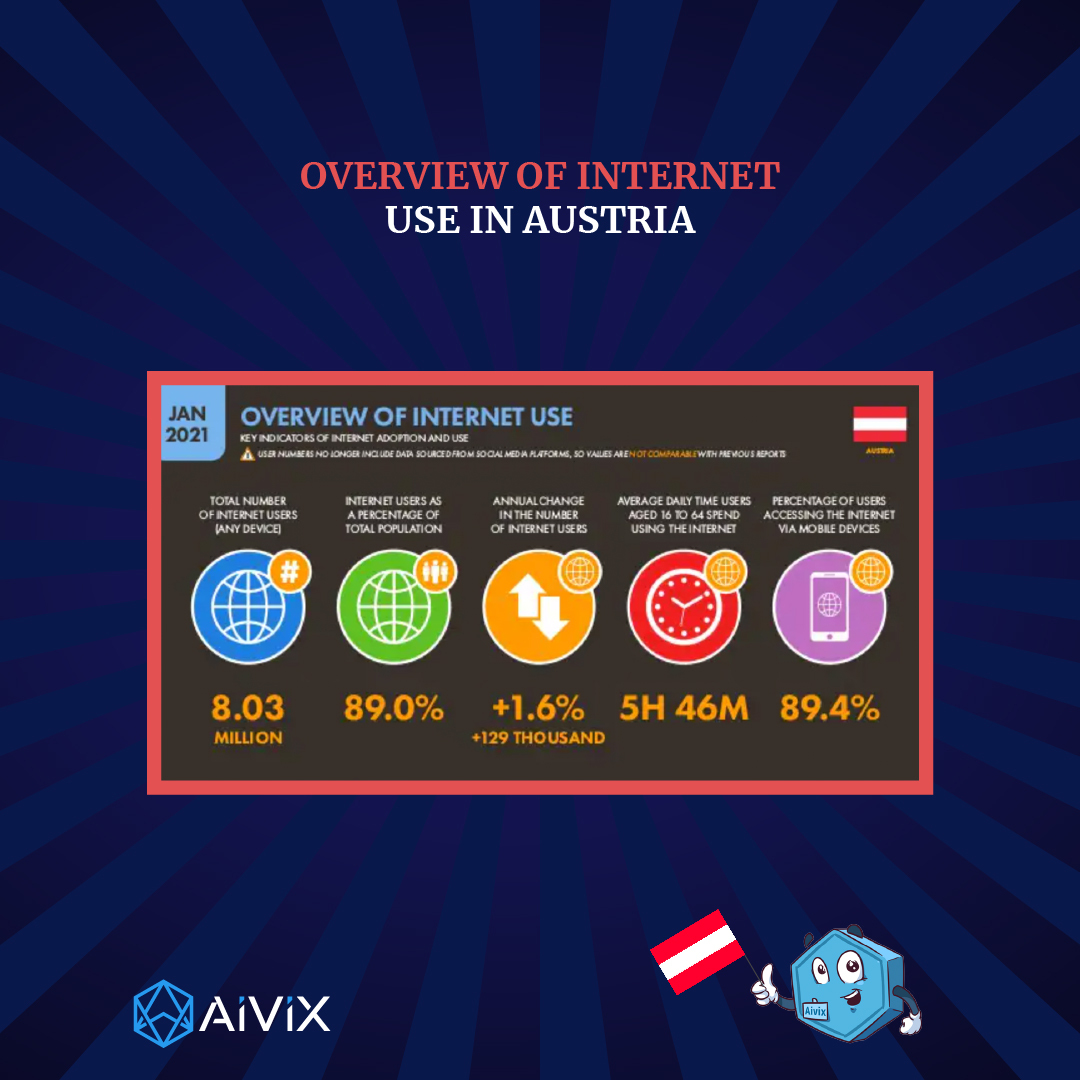 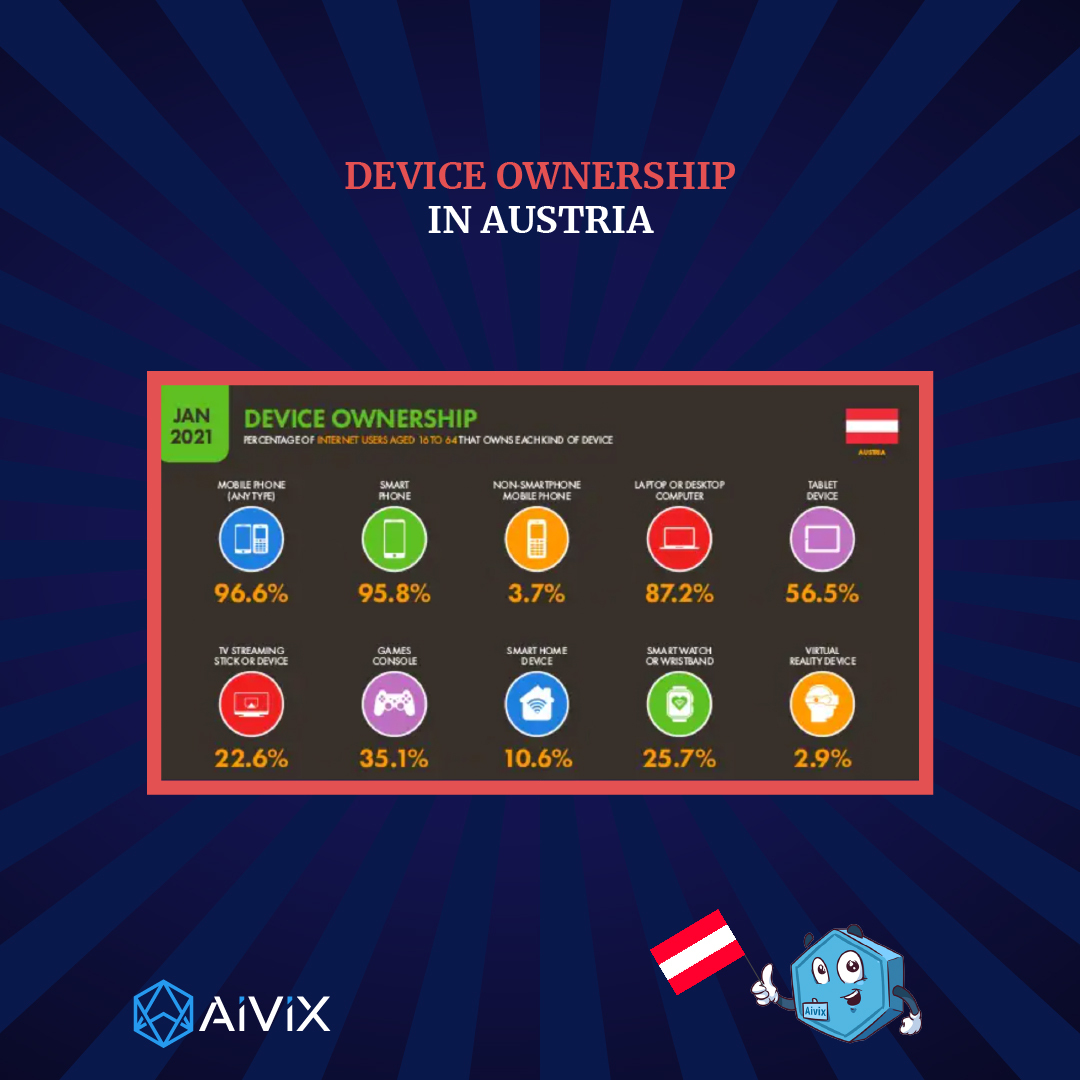 In order to legally trade cryptocurrencies in Austria, you need to familiarize yourself with the laws of the country. Next, we will describe in more detail the regulation of the cryptocurrency business in Austria. This information will be especially useful for those who plan to register a cryptocurrency company in Austria or exchange crypto assets for fiat money on Austrian exchanges.

The Fifth EU Directive (5AMLD) has recently been introduced into Austrian legislation. This directive expands the requirements for compliance with the rules of the AML policy and for the "Know Your Customer" (KYC) procedure. These regulations relate to:

- service providers for the exchange of virtual and fiat currencies (e.g. to crypto exchanges);

- e-wallet providers (e.g. organizations that provide services for the storage and transfer of virtual currency on behalf of their customers).

Despite low Internet speeds in Indonesia, 73.7% of the country's population - 205 million people are active Internet users. Check out this article and learn more about this GEO.

Costa Rica is characterized by a monolithic ethnic composition of the population. It follows that the interests, customs and other things of almost the entire population are similar. It can facilitate the segmentation of the audience when setting up your advertising campaigns.

Taiwan is an island nation located near China. Taiwan is a unique place. For example, you can come across a lot of flora and fauna found nowhere else in the world. Here we talk about life, mentality, business, and many interesting facts about this GEO